Double Take: Almost 400 Inches of Antler in a Week 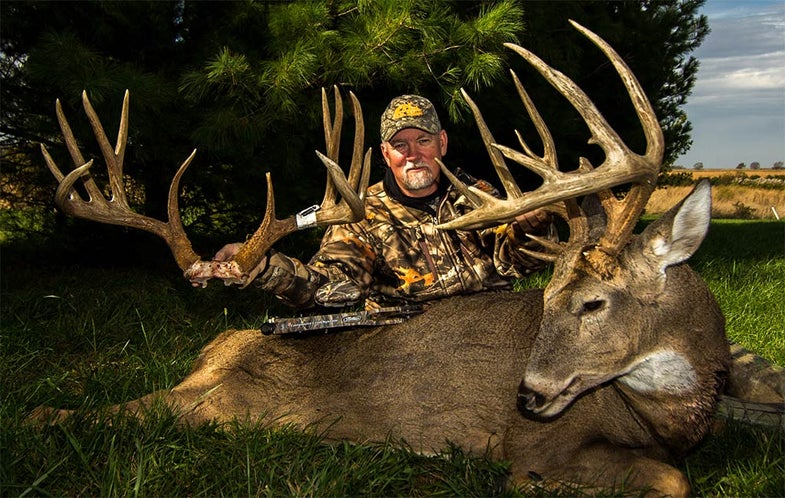 The phrase “buck of a lifetime” gets tossed around quite a bit and means different things for different hunters. But it’s safe to say that most of us will spend the bulk of our hunting careers only dreaming about taking one. Last month, Illinois bowhunter Don Higgins, co-owner of Real World Wildlife Products, tagged not one, but two such bucks—totaling just shy of 400 inches of antler. And he did it not just in a single lifetime, or a single season, but in a single week. Higgins’ feat was no lightning strike, either. He knew both deer well and had a plan designed for hunting each of them. Here’s his amazing story.

The primary focus of Higgins’ 2017 season was a buck he called Smokey, a 6-1/2-year-old whitetail he’d literally watched grow up. “I had a dream to raise and hunt a 200-inch buck on my home farm,” Higgins says. “I’d watched some really nice bucks here over the years, but Smokey—who I’d known about since he was 2-1/2 years old—was the only buck who had that potential.”

“Smokey was a relaxed deer that wasn’t afraid to move in daylight,” Higgins says. “I think that was partly due to his personality, but also because of the way I hunt my farm. I basically hunt only the fringes under perfect conditions. I give the center of the farm to the deer. So they don’t feel a lot of pressure.” As someone who makes his living producing and selling whitetail nutritional products, Higgins knows a thing or two about the kind of habitat and food that deer need. “I knew Smokey had some amazing potential when he made a huge jump in antler growth from a 130-inch buck at 2-1/2 to close to 170 at 3-1/2 years old.”

“Smoky loved to bed in these tall-grass bedding fields I create with a native grass-seed mix we call Bedding In a Bag. Years of watching bucks on my farm has taught me that some bucks like to bed in the timber, and others like the grass. Smokey was definitely in the latter group. The spring after he was 4-1/2, we were doing a controlled burn on one of my tall grass fields when the guys who were helping me found the buck’s matched set of sheds. They’d been scorched by the fire a bit, so that led to his nickname, Smokey.”

This video shows just one of five times Higgins passed Smokey, at 5-1/2 years old and sporting over 180-inches of antler, in the fall of 2016.

“In 2016, Smokey was 5-1/2 years old and just huge. I actually passed him five different times that fall, and I filmed one of those encounters. He walked right under my stand, and I can tell you, when he went past me and walked away, it was something to see. I’ve showed that footage to people, and they’ve all said I was crazy. But I felt confident he’d push 200 the next fall. That spring I picked up both sheds, and he would have been over 180 inches.

“As the fall of 2017 approached I was worried. We had zero rain in August and September, and the deer on my farm—including Smokey—were really hitting one waterhole hard. So I was very concerned about EHD, and the thought of losing him after all that time was scary. Luckily EHD missed us, Smokey was even bigger, and as we got close to opening day I was pretty excited.”

This trail-cam clip shows Smokey coming around the bend to face the camera in August of 2017.

“I knew Smokey so well that I put my odds of killing him at close to 90 percent. I planned to hunt him from an elevated blind that sits at the junction of five habitats: a farm field, a stand of evergreens, a hardwood thicket, a bedding grass field, and a food plot planted in our Deadly Dozen. On a northwest wind, I can access and exit that blind without bumping a deer. The first night I had that wind I didn’t see him. The second night he came out of his bedding grass but walked the other way. But the third night, October 15th, it was like everything was scripted: I watched him come out of the grass, hit the food plot, and feed to within 25 yards.”

“I made a good shot, and Smokey ran out to about 80 yards, turned to look back, and tipped over. I could have walked right up to him but instead I walked straight away, got on my phone, and called my dad. I’d had a plan since summer that he would be with me when I put my hands on Smokey. Dad is my number one fan. He wasn’t a hunter but he’d take vacation time to take me out as a kid, and he helped me drag out the first buck I ever killed. It was pretty incredible to walk up to Smokey and have Dad with me to enjoy that amazing moment.” The buck grossed 206-6/8 inches.

But Higgins wasn’t done. He’d had another monster buck on his mind for several seasons, and Illinois allows bowhunters two bucks per season. “But this second deer, a buck I called Trump, was the total opposite of Smokey,” Higgins says. “He lived out in the middle of nothing—just a brushy fence line between corn and bean fields. Last fall I spotted a huge buck out in that same spot and later a trail cam I have there got his picture. I immediately went back through my log of that camera location and realized I’d been getting that buck’s photo every year since he was 2-1/2 years old.

“So I started analyzing all my photos of him. Not only was Trump really unpredictable, but he also had a big range. By the end of last fall, I had pictures of him on 8 different cameras. During the rut, I got a picture of him on one camera, and 17 hours later he was on another camera 3 miles away. I decided it made no sense to chase him all over. So I went back to that original brushy fenceline, hung two stands, and decided I’d just hunt him from those. While I went into the season thinking my odds on Smokey were 90 percent, I figured my odds at Trump were about 1 percent.”

“I knew it would be boring waiting for Trump, but it proved even tougher than I thought. I’d set up on him nine different times since the archery opener and not only did I not see him; I never saw another deer, or coyote, or squirrel, or even a tweety bird. I wasn’t even a touch optimistic when I went out for my tenth try at Trump, on October 19th. But it was a really calm evening, and I suddenly heard stalks rustling in the standing corn nearby. I stood and picked up my bow—and Trump walked out of that corn like he’d been doing it every night of his life. It was the first time I’d ever laid eyes on him.”

“Trump walked out of the corn, turned toward me and came right in. When he turned broadside I took the shot. It wasn’t the hit I’d hoped for, but he ran 100 yards into some standing beans and laid down. I could just see him, so I kept glassing. Suddenly another buck came out of the standing corn and walked over to him. Trump stood up and walked back into the corn. I snuck out and back to the road, and then called my wife and my business partner, Kevin Boyer. When I told them I’d shot the buck, I don’t think either of them believed me at first.”

Higgins decided to wait overnight, and returned with Boyer and a blood-trailing dog. “The buck had made it out of the corn field and into a creekbed, but died shortly after that. Kevin found him first, and yelled for me. Honestly it was like a dream walking up on that deer. I had my hands on the antlers of a buck I had seen only one time—the same the day I was able to shoot him.” Trump grossed 193 inches, which meant that Higgins had taken two bucks in five days that together totaled just shy of 400 inches of antler.