Where are all the bucks before the rut kicks into gear? Packing on the pounds at these food-source hotspots 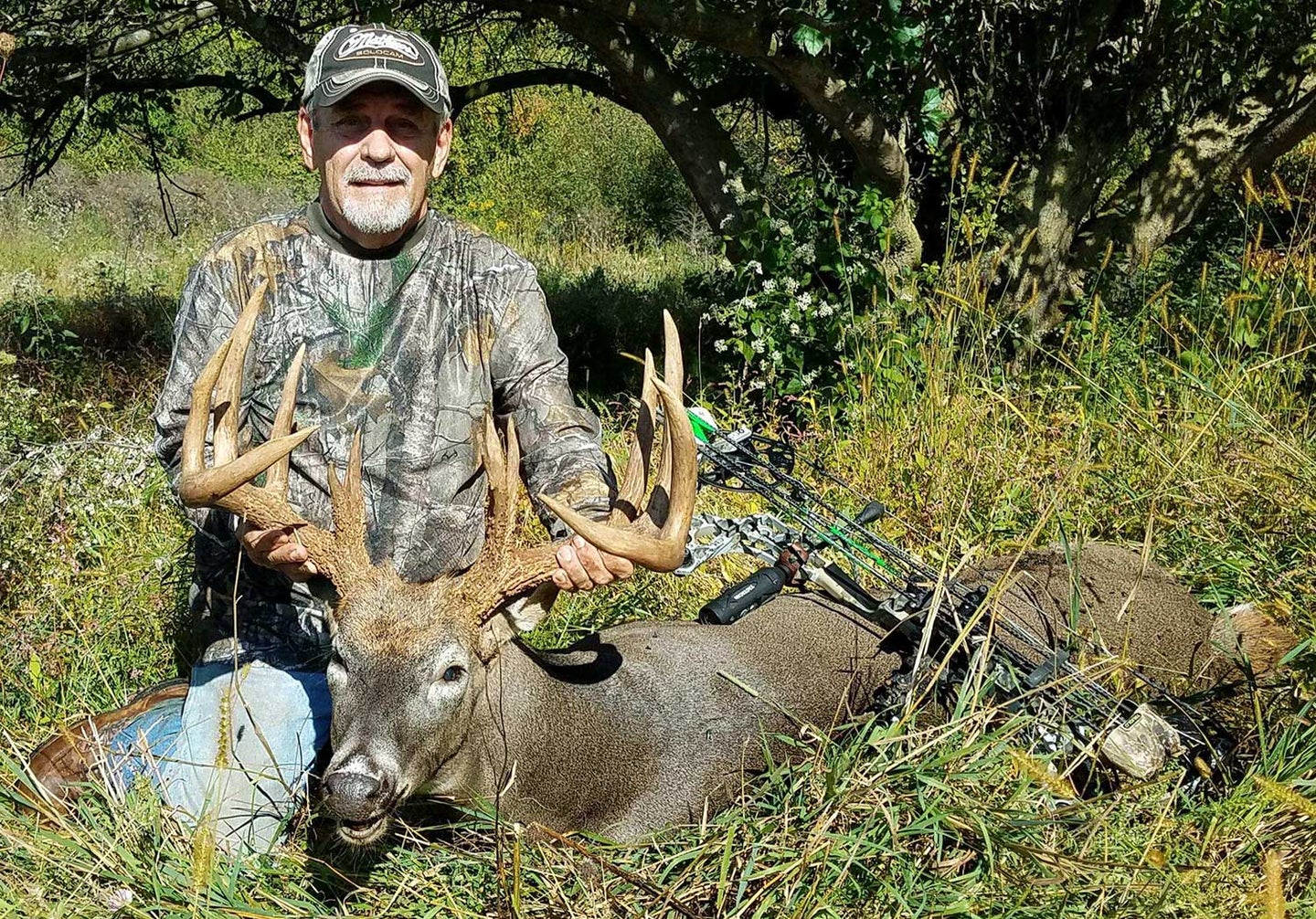 One of the best times to kill a whopper whitetail is the early season. Minus the distraction of chasing does and battling other bucks, a mature whitetail focuses on one thing: finding groceries. This means that, day in and day out, the hunter who knows what deer are eating will be into bucks. Here are 12 of the best early-season deer foods.

If you live in ag country, you should know all about the importance of alfalfa to deer. There is simply no crop that provides deer with more sheer tonnage of protein than a hayfield. But where there’s one alfalfa field, there’s usually a bunch. So how do you pick the best one to hunt? Here’s a hint: If you know a field has just been seeded this year, hunt that above all others. I’ve watched deer dig through a foot of snow to feast on newly seeded alfalfa, so keep tabs on this spot throughout the fall.

Deer are uncanny in their ability to find and eat foods that are good for them, but they’re also heat-seeking missiles for stuff that just plain tastes good. Apples don’t provide a ton of nutrition for whitetails, but when they start hitting the ground, it’s like scattering chocolate bars in front of school kids. The absolute best apple tree scenario is a tree or two dropping fruit near an abandoned farmstead (Are you listening, northeast hunters?). But if you’re dealing with the small orchards common in the Midwest, you can guide bucks toward a tree or two by doctoring them with mock scrapes.

Acorns are equal parts health food and candy for whitetails. While they’re rich enough in fiber and protein to sustain a herd through a long hard winter, they’re so tasty that even farm-country deer will ignore sprawling fields of easy groceries to dine on newly fallen acorns. The key is to find the acorns deer prefer. Start by focusing on oaks with good exposure to the sun, as they tend to produce bumper crops. Also look for acorns that drop without caps, because those with caps tend to be wormy or rotten inside. And, of course, look for nearby feeding and buck sign. Put it all together, and you’ll have a great shot at tagging an early-season giant.

While northern and Midwest deer hunters are largely ignorant of the persimmon’s charm, southern whitetailers recognize them as top-shelf, early-season deer candy. My Dixie buds tell me that you’ll only bite into an unripe persimmon once, but taste the ripe fruit, and you’ll love them as much as deer do. One totally cool fact about persimmons is that only female trees bear fruit, and if you’ve got a male tree growing close to a good stand setup, you can graft a branch from a female tree (identified by springtime flowers and other clues) to it, and turn it into a fruit-bearing female.

In the northeast, there may be no hotter early-season deer food than beechnuts. Though the tasty nuts of this stately, smooth-barked tree, are encased in a prickly husk, every critter in the big woods—deer, bear, turkeys, and squirrels—adore beechnuts and will devote considerable energy to devouring a bumper crop, which comes every three to four years. Savvy whitetail hunters should also focus on bumper crops of beechnuts if they want to arrange a date with a whopper buck. The trick is to scout the nut drop (visit beech stands and glass the crowns with a binocular) before it occurs. Once beech nuts start hitting the ground, they aren’t going to lie there very long.

There are some whopper whitetails living in the mountains and foothills of the West, and one of the keys to killing one of these reclusive giants is learning native plants like Ceanothus. Also known as wild lilac, buckbrush, or soap bloom, red stem Ceanothus is an important browse species for whitetails, mule deer, and elk. Smaller critters like birds, rodents, and insects also love the seeds. Mountain whitetails are infamous for sticking to small core areas during the early season, and those safe havens always include one or more solid food sources, like Ceanothus. Even better, if you learn to identify Ceanothus, you can smoke your deer meat on a fire made from the twigs (like the Native Americans did), or beat the plant, mix it with water, and make a foamy soap that won’t dry your skin.

Late fall and early winter are times when corn really shines as deer food and cover. But in the right conditions, it can be an early-season game changer. Many farmers harvest high-moisture corn for livestock feed, and this harvest almost always occurs in early fall, before cobs have dried to acceptable levels for market. If you see this early harvest occurring, jump on the action, as deer will almost follow a combine into a field to sample the leftovers. I shot one of my biggest bucks doing just that a few years ago when a neighbor cropping some high-moisture corn reported the sighting of a big buck that appeared on the cornfield each evening.

If I had to pick one ag-crop to hunt deer over, soybeans would be in a fight for the title. Hugely attractive to whitetails, soybeans have two peak windows of appeal. Deer, especially bucks it seems, love to browse on the leaves when they’re still green. And of course later, when the pods ripen, deer will fight each other to feast on just the leavings from a combine. There’s just one window of maturity when deer seem to avoid soybeans, and it sometimes coincides with early-season—that limbo time when the plant’s leaves are yellow and pods remain unripe. But you can often sidestep this phase by scouting soybean fields to find still-green patches (often in low spots in a field, or next to a tree line that slows plant maturity). Deer will still focus on these green patches, so you’ll basically be hunting a food funnel.

Here’s the thing about fall deer foods. Even in September, a lot of green stuff is drying up or dying off, which means anything green soars on the attraction meter. If you live in and hunt wheat country, you know that next fall’s crop is just now popping out of the ground and is as green and palatable as it’ll be all year. But you don’t have to live on the prairie to enjoy these green fields; a growing number of farmers are planting rye (and other species) as cover crops after they’ve taken an early harvest of another species. Also, the last several springs have featured record flooding across the Midwest and South, and those high waters have prevented farmers from planting traditional row crops like corn and soybeans. Rather than leave a field fallow, weedy, and susceptible to erosion, they plant cereal rye (and other cover crops) that remain green long into the fall. Find such a field, and you’ll be into feeding deer. Even better, many farmers have less of a problem granting permission to hunt a “prevent plant” field than they would a traditional crop.

Hint: If you ever want to plant an easy, no-brainer food plot, or rescue a failed one, plant cereal rye. The seed is uber-cheap, germinates easily and quickly, is highly preferred by deer, and can withstand lots of grazing pressure. Even better, you can plant it late (as in, right now, when you’re done reading this), and it will still grow enough to attract deer.

Milo, also known as grain sorghum, is widely planted in the lower Midwestern states like Kansas and Nebraska and can be a killer food source for whitetails (and mule deer). Since milo grows shorter than corn, deer can easily reach the seed head and munch away. Even better, the densely populated rows in a milo field make for perfect bedding cover for a buck, creating a double-whammy of feed and security that mature bucks love. Spend an early-fall evening glassing a milo field (particularly the edges near fencerows), and you’ll probably spot a good buck or two. Then things can get exciting, as a milo field is often perfect for stalking a buck. Keep low and downwind, and move closer only when the buck is distracted by feeding. It’s often possible to creep to within bow range.

We often think of brassicas as late-season magnets, because they are. But don’t forget to check the trail camera on the brassica plot during the early season. As soon as the leaves yellow on your bean plots after a few cool nights, you can bet that some deer are going to mosey over to the greens. And if you glass or check your cams, you’ll see them there with a big radish or beet root swinging from their mouths. The fact is, early-season deer love brassicas too, and you can often find them focusing on those plots for several days running—time enough for you to make your move.

Apples are important in the early season, and you’d be smart to factor them into your hunting plans. But from what I’ve seen, if a deer has a choice between apples and pears, it’ll take the latter every time. I hunt a farm that has dozens of apple trees and one pear. Guess where the deer go. I know, wild pear trees aren’t that common, but you certainly do come across them now and again, and when you do, set a good stand nearby and plan to sit it in when the fruit starts dropping.