Last week a team of firefighters managed to save two fawns while battling wildfires in Arizona, in a feat of... 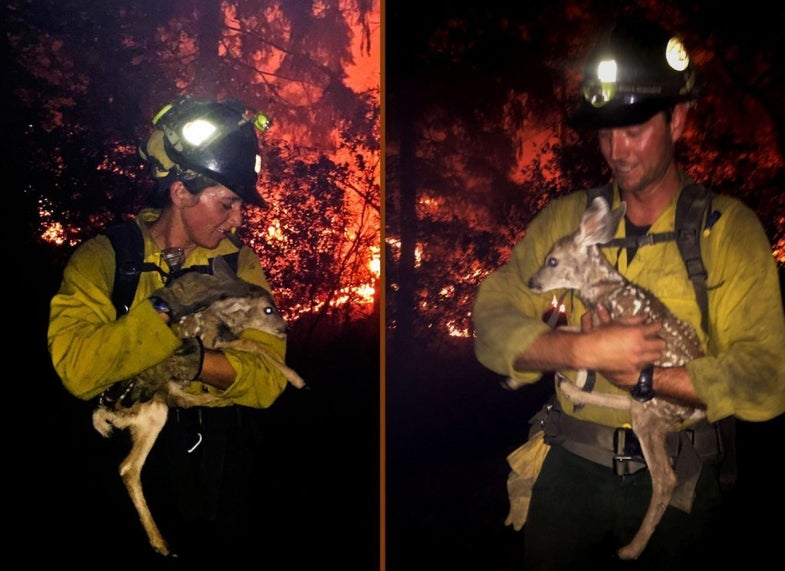 Last week a team of firefighters managed to save two fawns while battling wildfires in Arizona, in a feat of heroism seldom caught on camera. In the clip above, two firefighters can be seen with the deer tucked under their arms as they quickly haul them out of the hot zone.

“They were confused and mama’s gone,” Kale Casey, Goodwin Fire incident management team spokesman told the Washington Post. “There was a 100 percent certainty that these fawns were going to die.”

Firefighters are seldom able to rescue wildlife as fast-moving fires cook through forests and overtake animals. Crews usually witness the aftermath, and, although scientists do not have an exact number of how many animals perish in fires such as these, it is more common than not that small and young animals succumb to the flames. But, in this case, members of the Flagstaff Hotshots intercepted the fawns before it was too late.

Casey said the crew does not usually get involved with wildlife rescue, but this situation was different. “There’s no standard operating procedure for this,” Casey told the Post. “This is simply an act of what hotshots do. They’re a service-oriented people so they’re not going to walk by.”

The rescue happened inside the Goodwin Fire near Prescott, Ariz. According to the Arizona Republic, more than 28,500 acres have burned thus far, and illegal drones in the air have caused delays in the firefight.

Originally, the crew moved the fawns to an unburned area to be reunited with their mother. But an official from the Prescott National Forest later posted on Facebook that the deer were subsequently transferred to a wildlife-rehabilitation facility after one of the fawns needed help recovering. “If they respond to treatment they will ultimately be released when old enough to make the transition back to a life in the wild,” the post stated.

In the latest report from Prescott eNews, the fire is at 96 percent containment, and its cause is still under investigation.