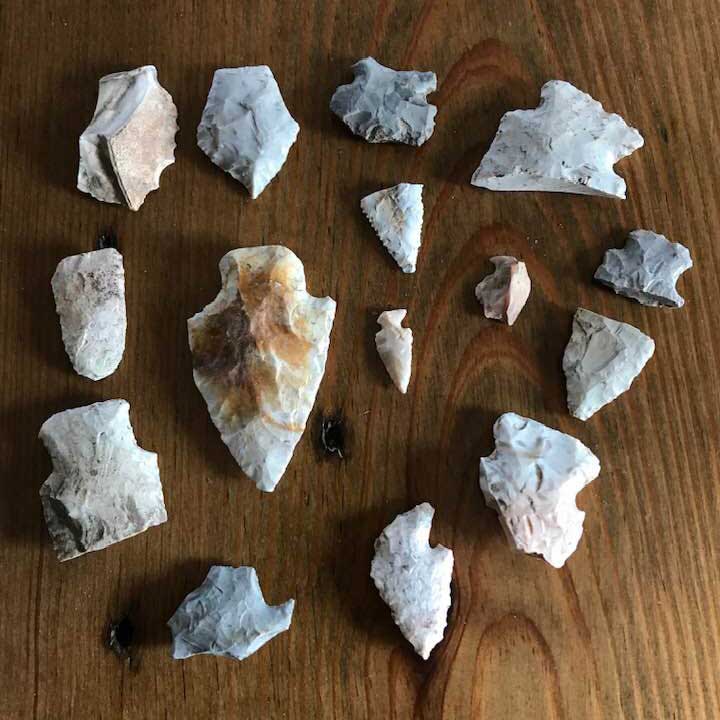 At some point on virtually every spring turkey hunt, I’ll find myself walking through a freshly plowed field. Inevitably, I’ll spend as much time peering downward as I do listening skyward. I can’t help myself. I might be hunting gobblers, but I’m almost constantly hunting stone arrowheads. Magically, I’ve found a number of them over the years, and when I do, it’s cause for celebration. Arrowheads connect me with hunters from the past, and the artifacts are a reminder of how different our methods and equipment are today.

A lot of hunters might know Missouri’s Brad Harris from his career at Lohman Game Calls. These days he converts large-scale tracts of land for hunting and agricultural purposes. Harris has cleared land in Montana, South Dakota, Nebraska, Kansas, and Missouri—states that had large Indian tribes. As a result, it’s common for him to find artifacts when he turns over soil, and even more common when that plowed earth is hit with a good rain.

“I began my hunting life with a recurve bow, and that kind of connects me to arrowheads,” Harris says. “Over the years, I’ve found several hundred pieces, especially a lot that are partially finished. The hunters must have quit working if the stone was chipping or if the weight was wrong, which meant it wouldn’t fly right. They’d toss it aside and start over. Kills were important for their survival, and finished points were always of good quality. It’s amazing that people live in those same areas today.”

“Moon and Irene Mullins from North Carolina began arrowhead hunting in the 1930s when the small relics were still scattered across the American landscape,” says their friend Wayne Underwood. “Just about any place you go, Native Americans have been there, and you could usually find something if you were patient and hunted for it. The couple would hunt all day long. They just loved life, and they loved spending it together.”

Most of their finds were on farms, and over the decades of hunting arrowheads, they amassed a collection of nearly 250,000, some of which were 12,000 years old. Historian Joe Candillo says the collection is worth more than $1 million.

“As you go back in time, an arrowhead becomes more valuable,” says Candillo. “Some of the oldest points, my goodness, I have seen these go anywhere from $500 to a couple thousand dollars.” On the low end, arrowheads sell for between $5 and $15 a piece. Financial gain, however, is inconsequential for most.

My approach bears no resemblance to either Harris’ or the Mullins’. For me, discovering an arrowhead is like finding a golden needle in a haystack. But read Arrowheads & Stone Artifacts: A Practical Guide for the Surface Collector and Amateur Archaeologist by C. G. Yeager, and you’ll see that searching for arrowheads is a lot like foraging. If you add some thought to the process, you’ll find points and other artifacts consistently instead of by accident. Here are 10 ways to get started.

More than 500 Native American tribes are recognized in the United States, and they’ve been around for a very long time. In fact, the Sandias of New Mexico date back to 15,000 BC. That’s a lot of tribes across a lot of years. To narrow your search for stone arrowheads, start by learning about the tribes that inhabited the area that you’re prospecting.

Some tribes primarily were peaceful farmers that tilled the land while others wove nets to catch fish. They all trapped and hunted for game, and that is their important common bond. Study the patterns and behaviors of the tribes in your local area through historical research found in books or online. Try to gain a thorough understanding of their lives, priorities, movements, and historical events that may have forced them to move.

Once you have a handle on where they lived, you’ll need to know what the area looked like when they lived there. The Shawmut Indians used to live in the area outside of Boston that is now Logan Airport, and that’s all runways and lights. Rural streams and seeps dry up over time just as fields get overgrown. Walking out to look at the terrain won’t give you what you need, so look to historical records for the clues.

In the world of arrowhead foraging, consistency comes from research, and research is about drilling down into tribe habits. Native Americans were seasonally nomadic, with some moving greater distances than others. Long-term camps were set up during two distinct time frames: summer and winter. Summer camps were in areas that provided a good place for planting crops and hunting game while winter camps were established in areas that offered the most protection from the elements. Short-term camps were used seasonally for sustenance.

Native Americans set up spike camps during prime fishing and hunting seasons. They’d move to saltwater estuaries with freshwater origins when Atlantic salmon moved into the tributaries to spawn just as they migrated to hardwood stands near fields when wild turkey moved into fields to breed. The elk migration prompted Native Americans to move into the high elevations in the summer and drop down to lower altitudes in the winter. Finding these seasonal hunting and fishing grounds is a great way to find arrowheads.

Some short-term camps were established for festivals and tribal meetings; others served as trade sites where were neighboring Native American tribes would barter goods. While concentrating your research on long-term camps dramatically increases the odds of finding arrowheads, the seasonal, short-term camps yield tips, too. Google might provide some information on Native American camps and habits, and historically documented books are an invaluable resource as well.

I have one grouse cover I call Fish Trap. I found it while asking permission to hunt a farmer’s property. The conversation went like this:

“Wondering if I can hunt your property?” I asked.

“What are you hunting?” he asked.

“Birds—grouse and woodcock. Looks like there might be some woodcock in the edge near the river at the east end of your field.”

“There are,” he said, “but there are some grouse on the west side near the creek. I hear them drumming in the spring and in the fall.”

“The river branches off into a shallow,” he said. “The Indians used to drive schools of spawning fish into the shallows and trap them in nets.”

By Indians, he meant the Pemigewasset tribe who were hunters, fishermen, farmers, and trappers. They were driven out of the area by soldiers in 1712. I found grouse where he mentioned, but while running the dogs on spring woodcock, I found something else: a spear and an axe head. When it comes to finding arrowheads, oral tradition is frequently more reliable than the Internet.

Water was an integral part of every Native American camp. Lakes, ponds, shallow creeks, and rivers that offered clean, pure water are a great place to find arrowheads. Spring-fed lakes, ponds, and rivers had a consistent flow and never stagnated. Seeps and small creeks are OK, but because they suffered from big flows during the spring runoff or dried up in the summer, they might be a waste of time.

Seasonality plays an important roll in consistently finding arrowheads. Spring is the best time of year because the ground is soft and the topsoil is often washed away during runoff. If your hunting ground is being used agriculturally, the soil might be turned over by a discer. Exposure to the soil below is key, for it makes the arrowheads easier to find. The ground is usually hard ground during the summer and covered with snow in the winter, so those times of year make finding arrowheads difficult. Next to spring, a post-harvest fall field that is tilled and planted with winter rye can be good, too.

Differentiating between broken rocks and arrowheads is relatively easy. Arrowheads have a point, an edge, and a base. They needed to be made from strong stone that could be sharpened and light enough to fly true. Quartz, limestone, and marble all had their uses, but arrowheads were mostly made from chert, obsidian, and flint. Regionality plays an important part in the stone used for arrowheads. Chert, for instance, was commonly used by Native Americans in Missouri and Illinois. When you find an arrowhead, cross-reference the material to see if it was something locally available.

Not all points were made with stone, though. In coastal areas, arrowheads may have been made from a variety of other materials like clam and oyster shells. The properties of hard-shell clams make them easy to chip into a point and sharpen on the edge. Those same properties are found in another commonly found material: animal bones. Of course, to carve a tip out of bone, you first need to harvest an animal. Still, bone arrowheads are relatively common.

Identifying your find can be difficult, but an excellent resource is The Official Overstreet Indian Arrowhead Online Database.

Here you’ll find over 60,000 images that have been archived over many years by serious collectors. These pictures are worth a thousand words, so check it out and compare what you’ve got.

Finding arrowheads is cool, but look for other artifacts, too.

“I’ll find bottles, cans, firearms, horse collars, and tools—all lost by a homesteader 75 or a hundred years ago,” Harris says. “Then a bit deeper, I’ll find arrowheads and spearheads from an Indian camp that was there a thousand years earlier. Settling at elevations above rivers kept people safe from floods. They’d also have fields nearby for planting and woods for hunting.”

Spearheads, axe heads, and paint pots (which were used to hold different colors of facial paint for ceremonial use) are equally interesting. Primitive toys like stone marbles are sometimes found in areas where there were long-term encampments. Anything that looks different from a rock might be a unique find.

Most arrowheads are found on the surface of the ground, but if you find a few in close proximity to each other, many arrowhead hunters will start digging. You might find more, but here’s where it gets tricky: You might be in a sacred place like an Indian burial ground. Leave that area for the pros to check out. Consult the local resources to report such a historical find; they’re what some archeologists search for their entire lives.

If you need to know how stone points compare to steel broadheads, just ask primitive archer Billy Berger. He tested both by shooting them into a freshly-killed deer carcass. Berger’s stone points were fashioned from Texas flint and fastened to arrow shafts with pine sap glue and sinew. The penetration was similar, and the flint arrowhead remained intact.

Maybe the ancient arrowheads that you’ll find on the ground are still sharp enough to take down a deer. Regardless, whether you’re hunting for them or hunting with them, stone arrowheads are a living history that connects us to the hunters of the past.