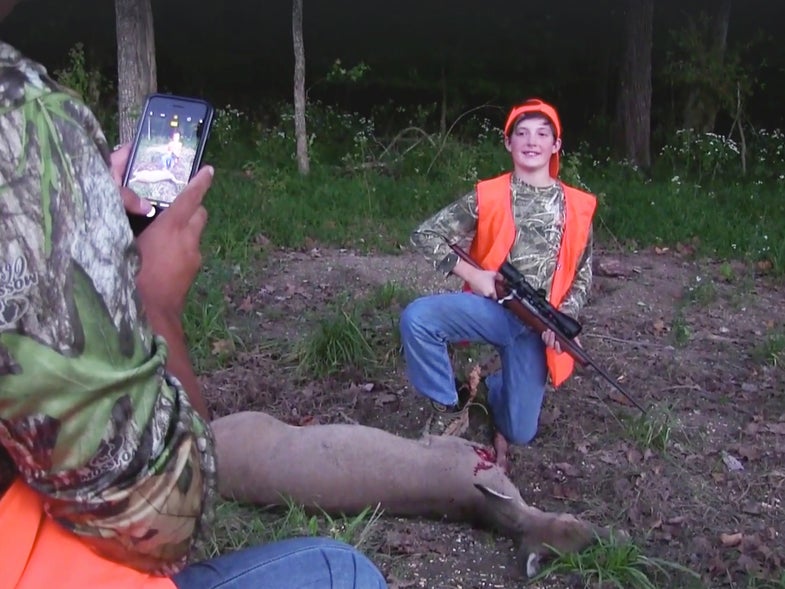 My friendship with Jason Sealock began with something of a trial by fire. We were both new to the outdoor writing business, and our first assignment together took us to Greenwood, Mississippi, where we noodled catfish in the Yazoo River. I was the writer; Jason was the photographer. The resulting story was my first byline in Field & Stream.

That was 10 years ago, and Jason and I have been friends ever since. My work has mostly been in the broadhead and bullet side of the business. Jason writes about fishing. Currently, he’s the publisher of Wired2Fish.com. On occasion, I join him in his bass boat so that I can backlash his baitcasters real good. On occasion, he joins me in the woods because he does like to hunt—but not nearly as much as his 12-year-old son, Jett.

Jett was a toddler when Jason and I met, and I’ve watched him grow into a young man. He’s a skilled athlete and all-around good kid. Last year, Jason called and said that Jett’s interest in hunting was growing. I wanted to help. I gave Jett a big box of hand-me down camo. He deer hunted several days, but never got a shot. This past spring, we took him turkey hunting, and on the second morning, he killed a big gobbler.

Helping Jett get an opportunity at his first deer was a high priority for the 2016 deer season, and I knew the first good chance would be in early October, during Kentucky’s two-day youth-only gun hunt. I called my buddy Harry Pozniak, who owns River Valley Farms in nearby Cadiz, Kentucky for a little assistance. We often lean on Harry for trail camera photos and hunting tips in F&S. He knows deer—and he especially likes helping new hunters. Harry opened a couple of his leased properties to us with the instructions: “Have at it. Be careful. Have fun.”

The rest was up to us.

I hung some cameras, and they were simply alive with deer activity in the days ahead of the youth hunt. Not only was I sure Jett would get his first opportunity at a deer, but I was reasonably confident he’d get a crack at a good buck. On opening day eve, after an afternoon at the gun range, Jett and Jason joined me at the house to review some pictures and eat a fried backstrap supper. We planned to hunt a ground blind on the corner of a standing cornfield the following morning.

We began the youth hunt with a predawn setback. We arrived at the blind a half hour before daylight to find a grain truck parked 30 yards from it. The farmers had begun shelling the cornfield the evening before.

Being 12 and an athlete, I’m reasonably sure Jett has heard some cuss words at school and in the locker room. But not words like this. The string of profanity Jason and I wove as we floored it to the other side of the farm to another blind was nothing short of art. If Jett was paying attention, his buddies would be impressed come Monday morning.

The second-pick blind was set on a roadbed intersecting a white oak ridge, with the cornfield behind us. We bumped a doe and two fawns sneaking in, but we managed to get settled just at legal light.

We spent nearly the entire day expecting a deer to appear at any moment. Truthfully, I thought the doe and fawns would return. According to the trail camera on the roadbed, deer were using this place at all hours of the day. There were a couple fresh scrapes, and half a dozen rubs within sight. Yet, it was breezy, and for much of the day, we were listening to the combine at work. We saw some turkeys and squirrels, but shooting light ended that evening without a single deer sighting.

Our hopes were higher the second morning. It was calm and colder, and the farmer had told us the day before that he wouldn’t be working the fields until late morning. Still, we sat. I worried Jett would lose interest, but he didn’t complain. At 10 a.m., I started gathering loose items into my pack to leave. With one afternoon remaining in the two-day season, it was time for a change in scenery.

That’s when I saw her. A big, dark doe not 50 yards away, and walking right toward the roadbed. Jason and Jett both thought I was joking when I said, “deer,” but Jett quickly picked her out and readied his rifle. The doe needed to take a few more steps before giving Jett a wide-open, 40-yard shot.

She didn’t take those steps. Instead, she caught our scent on a swirling wind that was not in the forecast. The ensuing stomping, snorting standoff was just the type to aggravate a seasoned deer hunter. To a kid looking to fill his first tag, it was heartbreaking. The doe eased over the ridge and out of sight.

We stuck to our plan for a change of scenery for the final evening. Harry had several other young hunters in camp, and though the first morning had been equally slow for them, they’d all seen deer on subsequent hunts. We agreed the unplanned combining had simply messed up what had seemed to be a sure thing.

“I called a farmer who has a pretty special place down the road,” Harry told me. “It’s a beanfield that just fills up with deer every evening. There’s a shooting house. I’ve never gotten to hunt it, and he doesn’t let many people in there. But he heard Jett’s story, and he wants to help. Jett’s free to shoot whatever he wants—but there will be bucks in that field before dark.”

We made the half-hour drive with newfound enthusiasm. Harry and the farmer met us at a pull-off on the edge of the beanfield. “Keep an eye out straight in front of the box—but most of the deer will amble in from that far corner,” the farmer said. “There’s a big white oak over there, and they’ve been feeding under that every afternoon. It’s a pretty long shot, but they usually end up moving closer to the box toward dark.”

It was a classic Kentucky October day. A chilly morning gave way to a sultry 80-degree evening. We shed all things insulated, and hunted in shirtsleeves and jeans. The first doe and fawns eased into the field not 20 minutes into the sit, and made their way toward the oak.

“Let’s wait a bit and see if we get a good, close shot,” I said. Jett and Jason agreed. Deer simply poured into the field—and a good 8-point stepped out an hour before dark.

If we hadn’t been filming, we wouldn’t have spooked that doe, which seemed to keep the buck from moving closer to us. I needed the camera to capture every element needed to tell this story. But the camera didn’t help our chances.

With time fading, we decided to let Jett try the 200-yard shot. He was shooting my .308, and he’d been consistent at 100 yards at the range. Between the window frame and my bundled jacket, he had a good rest. But the shot was his first ever at a live whitetail, and he barely missed over the buck’s back. He was devastated.

Yet, Jett would get one more chance. With 15 minutes of the youth season remaining, a doe stepped out in front of the blind, 95 yards away. The tone inside the blind was tempered now; serious.

The doe dropped in her tracks at the shot; down, but not dead. Jett quickly made the needed follow-up. He’d killed his first deer.

As we hung Jett’s deer and dropped the quarters on ice, I wouldn’t say the mood was either jubilant or somber. It was simply quiet. Two days of hard hunting and the ups, the downs, and the unexpected had simply taken their mental toll.

Jason tells me that even now, Jett regards the miss as his “big one that got away,” and that he doesn’t like talking about it. He’s certain he’ll never again get another chance at a deer like that.

Yet, he’s proud of his doe. He enjoys jerky and backstraps. He likes shooting guns. He wants to hunt again. I don’t want to spoil things by telling him that if he sticks with it, he’ll have chances at dozens of similar 8-pointers in his career.

In the deer woods, some things are best learned on your own.