Neil Dunlop, who handles corporate communications for Kia of America, is a fisherman to his very core. You need to... 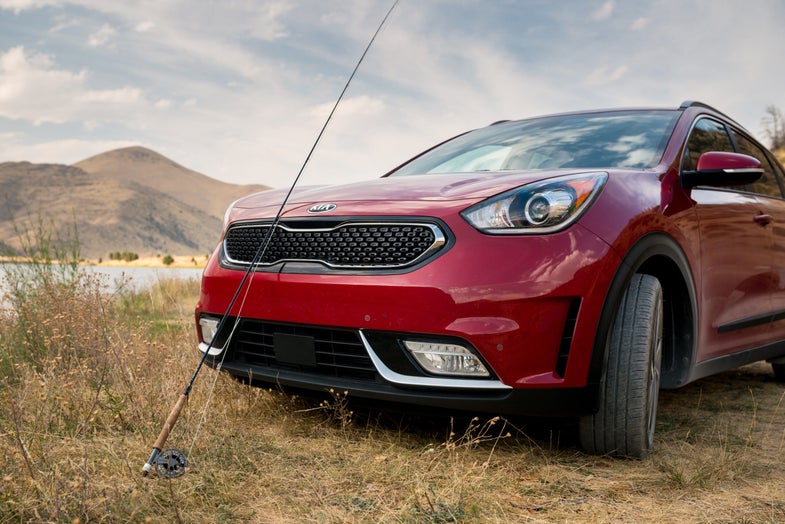 Neil Dunlop, who handles corporate communications for Kia of America, is a fisherman to his very core. You need to know that before we go any further. He called me a while back about taking a look at a new Kia.

“A crossover vehicle?” I asked.

“Why don’t you come out here and see for yourself?”

Out here being Montana.

“You’ll get a chance to spend time behind the wheel. And, we’ll also float the Madison.”

The 2017 Kia Niro was not what I expected. It certainly isn’t an SUV or a typical crossover. Instead, it’s what Kia likes to call an “Urban Crossover Hybrid Vehicle.” Whatever you call it, it deserves a close look. Hybrid technology has advanced rapidly over the past few years, to the point where Dunlop says, “Hybrid technology is no longer the future—it’s arrived. And now it’s getting refined.”

I get that, but for a lot of outdoorsmen the hybrid churns up images of smug urban hipsters prattling on about how “green” they are and how they (and no one else) are saving the planet.

You won’t find any of that unctuous posturing with the Niro. In fact, unless someone told you it was a hybrid, you wouldn’t notice. The transition between the internal combustion engine and the electric motor is damn near seamless. As for the styling? On purpose, it doesn’t look like the typical hybrid.

Dunlop points out that the Niro is a hybrid from the ground up, meaning the manufacturer didn’t shoehorn a hybrid configuration into an existing model. So, unlike the infamous retrofitted Oldsmobile diesel of the 1970s (a hasty and ill-conceived answer to the gas crisis of that decade), it actually works.

Making a hybrid really work doesn’t come cheap. Dunlop tells me, “Electric energy and power for the whole system is provided by a compact, lightweight 1.56-kWh lithium ion polymer battery located underneath the rear seat. Because the high-voltage battery is both power‑ and energy‑dense, it is smaller and lighter than other hybrid batteries. That allowed engineers to downsize the gasoline engine to further maximize fuel economy and reduce emissions.”

That downsized engine, by the way, is a 1.6-liter four-cylinder that was designed expressly for hybrid application. Again, no retread technology.

“The Niro is a linchpin in our eco-dynamic lineup, a lineup to which we’ve committed $10.2 billion,” he says.

So, to whom will this vehicle most appeal? No question, the Niro was built to meet the sensibilities of the Millennial generation. These consumers, the numbers of which just surpassed that of the Baby Boomers, are huge social influencers. Of that, there is no doubt. But they’re also strapped financially. Many of them cannot afford a full-size pickup or sport utility, prices of which often start around $35,000 to $40,000 and run over $50,000 by the time you add options. (The hurt extends beyond vehicles as well. Outdoor recreation manufacturers across the board moan about this generation’s “sharing” economy, in which they often buy used, rather than new, equipment. They also trade and borrow gear among themselves.)

Surveys have shown that this group prefers vehicles that are “green” to some extent. They also want vehicles that demonstrate proven fuel economy. Maybe most important, they want vehicles they can afford. The Niro delivers on all counts. Kia claims the Niro achieves as much as 50 mpg (depending on the precise model driven). As for pricing, base models begin at around $23,000. Fully loaded versions run to $30,000. The car is small, but the interior is surprisingly roomy. I’m 6 foot 2 inches, and I had plenty of head and leg room. There’s also a surprising amount of storage space. I watched Dunlop fit in a rigged 9-foot 5-weight fly rod inside without having to break it in two.

“I fish a lot,” he says, “and this car can easily hold my tackle bag, waders, and other gear for an afternoon of fishing.” The flat design of the battery under the rear deck is a key asset here, helping maximize storage space. After a pair of long drives down through the Gallatin Gateway and up along the Shields River, I was impressed by the car’s performance. I didn’t expect that. On long hills, if you keep the dual-clutch six-speed transmission in economy mode, it will lag. In that case, switch it to sport mode, which delivers more power (with a slight decrease in fuel economy).

By now you’ve no doubt figured out the Niro isn’t for everyone, but then it wasn’t designed to be. After we came off the river, our guide, who drives a full-size pickup, said, “Not for me. I won’t drive anything that doesn’t have eight cylinders.”

But for a younger sportsman on a tight budget who may have a kid or two in tow (and has to park in a crowded urban landscape), the Niro just may be the ticket. And here’s something else to think about: The Niro comes with a five-year 60,000-mile basic warranty, and that drivetrain is covered for 10 years or 100,000 miles. (kia.com)