A local fishing guide caught the muskie in Lake Ontario. Officials say it's the first recorded catch of the species in Toronto in decades 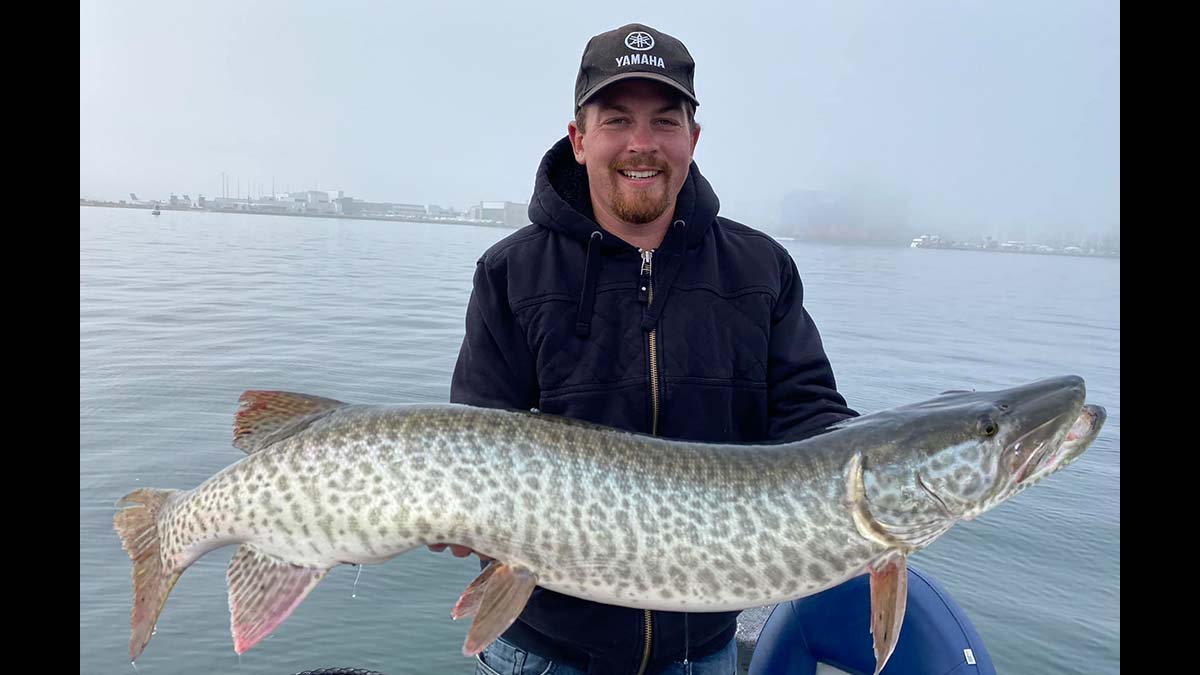 Will Sampson, a 31-year-old fishing guide who runs Detour Fishing Charters in Toronto, Canada, recently boated a nice muskie. Local conservationists are hailing as the first muskie documented in the city’s waters in recent memory.

Sampson and his friend, Kacper Golinski, were fishing last weekend in Lake Ontario between Toronto Island and the downtown waterfront when he hooked the muskie. “When it first hit, we knew it was a good fish, but not until it got to the boat and we saw it was a muskie—then the adrenaline kicked in,” Sampson told local news station CP24. The angler has fished the harbor all his life. He says his knees buckled when he realized exactly what he had on the end of his line.

Catching a big muskellunge, widely known as “the fish of 10,000 casts,” is a thrill no matter where you do it. Catching one that measures 43 inches long in the shadow of downtown Toronto is, apparently, downright mythical. “It was definitely a shock,” Sampson told CBC News. “We knew we had caught a unicorn.”

Experts who monitor fish species in the area confirmed the rarity of Sampson’s feat. “Catching a muskie in Toronto Harbor is super uncommon,” said Rick Portiss, a senior manager of aquatic monitoring and management at the Toronto Region Conservation Authority. “We’ve never had one in our catch over 30 years of environmental monitoring on the Toronto waterfront.”

This huge muskie, caught and released on Sunday, is believed to be the first of its kind ever recorded in Toronto's harbour – 📹 Kacper Fishin #Toronto pic.twitter.com/COxiN7OoN5

Muskies are routinely found in other parts of Lake Ontario, and as far back as the 1800s, there was a thriving population in the Toronto area. But urbanization of the downtown waterfront gradually destroyed the habitat that once supported the fish. In recent decades conservation projects—including the creation of wetlands and waterfront parks with naturalized areas—have focused on bringing back the natural habitat and improving the water quality of the lake.

Read Next: The 50 Best Fishing Lures of All Time

“Finding a fish like this is one true sign of an improvement of the habitat and the restoration of activities in the Toronto waterfront,” Portiss says. He predicts that muskies and walleyes—another rare fish in the area—could soon become more common sights in Toronto waters.

Golinski, who netted the fish for Sampson, posted a video on Twitter of the pair releasing the muskie after photographing and measuring it. “We took good care of it,” Sampson told the Toronto Star, “and sent it back into the water so it could hopefully reproduce.”