Follow these basic flyfishing tips, and you'll go from skunked to strikes in no time 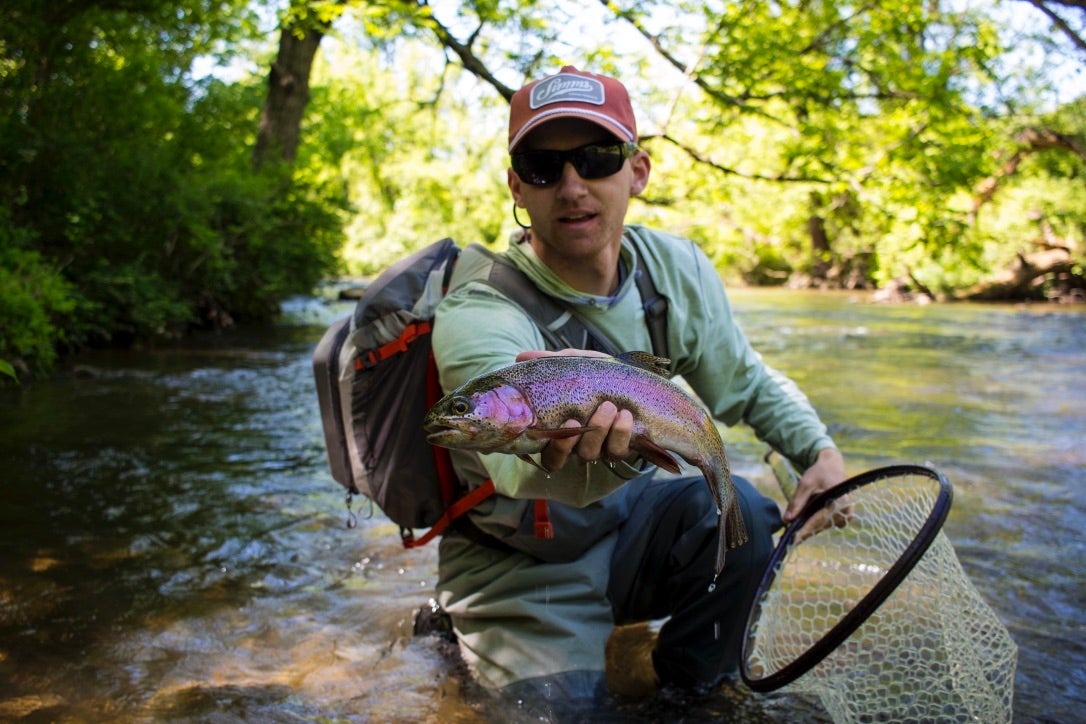 Flyfishing for trout can be one of the most rewarding and exciting outdoor pursuits there is. It can also be one of the most frustrating. I often hear people who don’t flyfish talk about how difficult or impossible it is to catch a trout on the fly. I’ll let you in on a little secret: Flyfishing isn’t as hard as it may seem.

Like anything, there are different levels of anglers, and starting out doesn’t need to be so intimidating. The reasons new fly anglers don’t catch trout have more to do with the basics—reading a river, understanding fly patterns, and using the wrong gear. While you will learn many of these skills through experience and time spent on the water, you can still catch plenty of fish by sticking to the basics and fixing simple mistakes. With the trout season upon us, get rid of the notion that flyfishing is the hardest thing to do and focus on the basics to catch more fish. Learn how to fix these six common mistakes, and you’ll be on your way to better days on the river.

Mistake No. 1: You’re Making Too Many False Casts

I can’t tell you how many times I’ve seen beginner anglers make seven or eight false casts before they try to present the fly. Almost every time, it results in a pile of tangled or twisted fly line twisted. You don’t need to make a half-dozen false casts to catch a fish. With each false cast you make, the probability of something going wrong increases as it becomes more difficult to control the line.

“One of the most common mistakes I see is beginners false casting way too much,” says Paul McCain, owner and founder of River Bay Outfitters fly shop. “They have the impression you need to cast 80 feet when you only need to cast 25 feet. Accuracy is far more important than distance.” One or two false casts will often do the trick, and if you are fishing with a streamer or nymph, try roll-casting. The fish don’t care how cool you look while casting. At the end of the day, you simply need to get the fly in front of the trout.

Mistake No. 2: You Stick to One Fly Pattern

Anglers often get hung up on fishing a particular pattern for one reason or another. Maybe it was the ticket last year at the same time, or they read an article about a specific fly being the be-all and end-all. When it comes to fly selection, you simply need to match the hatch as best you can—whether you’re literally matching a live dry-fly hatch or imitating native baitfish with streamers. Always start with natural imitations and patterns.

There will, however, be some days when the trout just aren’t biting. There are endless reasons why a trout won’t hit a fly, but the important lesson is knowing when to change things up. Switch patterns, colors, and styles. If you aren’t catching them on dries, then try emergers or nymphs. Throw attractors and bright colors to force a reaction strike.  Use everything in your box until you find what works. If you’ve been casting to the same fish for an hour without them even noticing your fly, then it’s time to try something new. Get out of your comfort zone and fish with flies you normally wouldn’t try. I guarantee you will learn a thing or two and walk away a better angler.

Mistake No. 3: You Don’t Know How to Read a River

Learning to read a river comes with experience and time spent on the water. From one river to the next, each seam, riffle, and pool can tell you something different from the one before. And while you won’t become an expert at reading rivers overnight, that doesn’t mean that new anglers can’t understand where a trout will be hiding. You just need to know where to look.

Most newbies will approach a riverbank as if the entire stretch of water is the same. And if you start randomly making casts, chances are you won’t catch fish. Begin by identifying some of the essential sections of a river like riffles, runs, seams, and pools. These spots all have unique features that trout use differently. Here’s what to look for:

How to Fish for Trout in Riffles and Runs

These are shallow, rocky areas where whitewater develops. The structure creates hiding spots for trout as they wait for food to come by. A run comes directly after a riffle where the water slows down and becomes deeper. This is another productive area to fish as trout will often suspend along the edge, waiting for aquatic insects to wash downstream.

How to Fish for Trout in Seams and Pools

A seam is where two currents meet and is one of the most critical spots to identify. Trout will sit in a seam as the converging currents create a feeding lane directing food into their path. Pools are the deepest part of any section of a river and have the slowest current. Learning the basics and focusing on these areas will maximize your time on the water and increase your chances of success.

Mistake No. 4: You’re Not Setting the Hook Properly

Nothing is more disappointing than doing everything right—making a great cast, having a trout eat your fly—only to screw up on the hook set. Most of the misses I see, including my own, can be attributed to laziness and not paying attention. If you aren’t watching your fly or indicator when it disappears underwater, chances are you won’t hook the fish. Stay attentive and be ready for a trout to take your fly on every cast.

Some other common mistakes include not managing the slack in the line and setting the hook too early. If you aren’t managing the slack during your drift, you may completely miss the hook set. Make sure to hold the line in your free hand throughout the drift. It will keep tension in the line and help you control your fly. As exciting as it is when a trout eats your fly—make sure they fully get it in their mouth before setting the hook. Don’t jump the gun, and you’ll stick more fish.

Flyfishing is a gear-intensive pursuit—so much so that it can be overwhelming. You need waders, boots, rods, reels, leaders, tippet, flies, etc. The list goes on and on, and you may struggle if you don’t have a good trout setup. It’s important to focus on the essentials first and get an effective trout rod and reel. For your first rig, choose a 4-weight or 5-weight rod with a matching reel.

“Another common mistake I see is people with the wrong rod,” McCain says. “Like all fishing, the rods are tools. The right rod will do the job better than the wrong rod. There is no one rod for everything.” Leader and tippet is another area that plagues novice anglers. Trout, especially heavily pressured fish, will avoid visible lines in the water. The right size tippet is crucial to trick finicky trout. Anglers will often have too heavy of a tippet, and simply taking it down one size can result in more fish.

If you’ve fished in one spot for an hour and haven’t caught anything—move on. Rookie anglers will often stand in the river, not moving more than 10 feet, and fish for hours without a single bite. Moving around and covering water is one of the most effective ways to find fish, catch fish, and learn how to read a river. It pushes you outside of your comfort zone and forces you to find new spots.

If you aren’t catching anything, it doesn’t necessarily mean you are doing something wrong. It just might mean there aren’t any fish there. I found some of my most productive trout spots during slow days that forced me to try new areas. That’s what is so much fun about fly fishing for trout. You get to explore rivers and streams, see new things, and learn what makes good habitat.