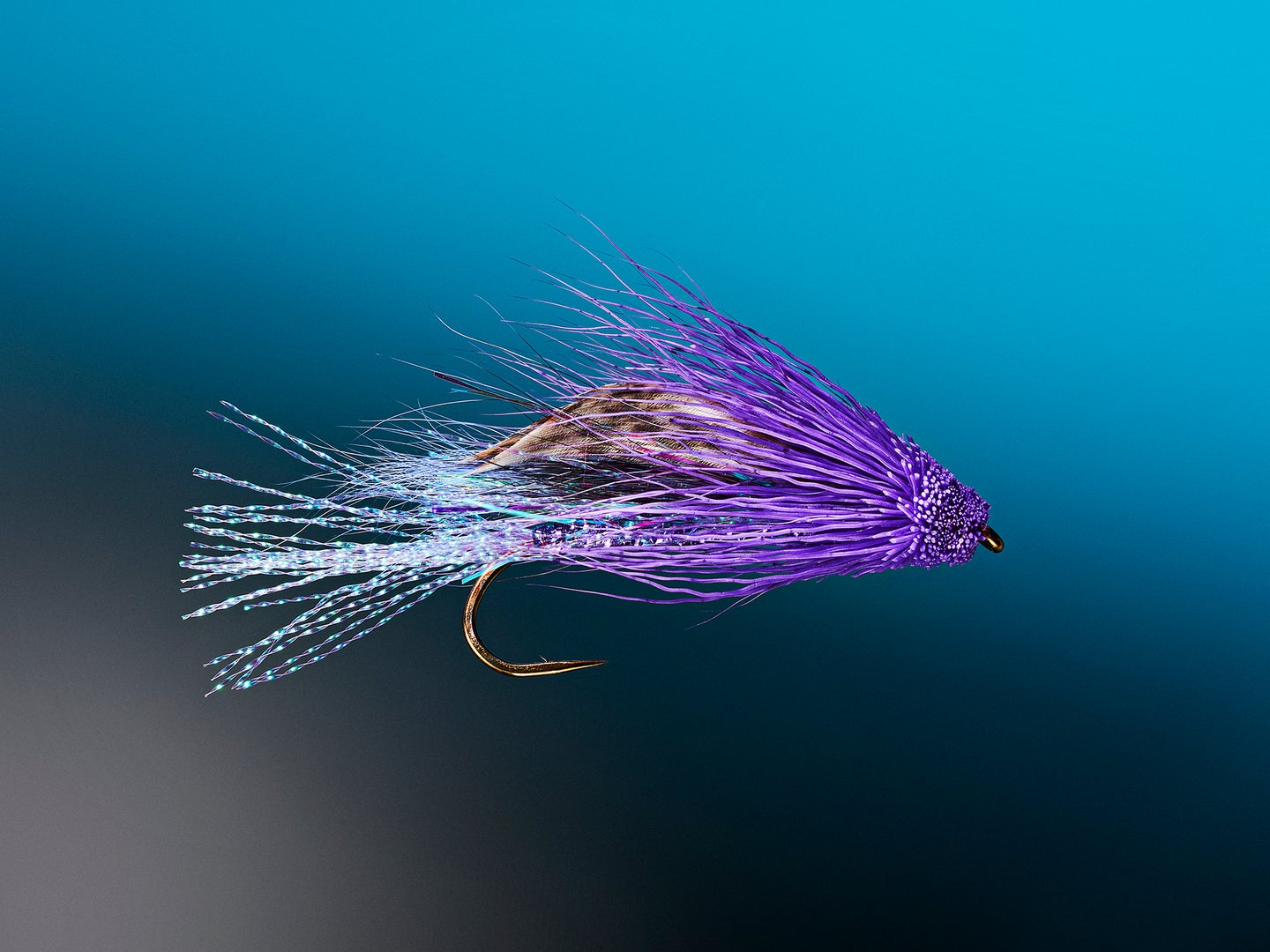 A greased Muddler Minnow cuts a wake across the surface that steelhead can’t resist in early fall. Jarren Vink

The Best Classic Steelhead Flies for Every Month of the Fall

If you could use only three fly patterns to catch steelhead throughout the fall, you couldn’t go wrong with these standbys

September: Month of the Muddler

For a steelhead fly fisherman, September is the month of the dry—when a fly skated across the surface is most likely to draw strikes. Later in the fall, when water temperatures dip into the 40s, the odds of getting a fish to look up begin to diminish. The key to success, besides checking your thermometer, is simple to say, harder to follow: Keep the faith. You can’t catch a steelhead on a dry fly if you give up on it after a few dozen casts. I find that the easiest way to resist the temptation of fishing wet flies in September is to leave your fly boxes in the car, taking to the river only a small selection of dries, along with one small wet fly (more on that bit of sacrilege later).

Clipped-hair Bombers and foam-backed Skaters ride high and certainly produce, but my favorite pattern is that old standard the Muddler Minnow. Why a Muddler? Because it is so versatile. Greased up and swung down and across current, the broad, spun deer-hair head causes the fly to cut a V-shaped wake in the surface film that steelhead find irresistible. Then, too, after tying on the fly at the eye of the hook, you can put a half hitch in the leader behind the head of the fly. This causes the fly to swim perpendicular to the current, which on some days, and for some fish, makes the difference.

With regard to color, any color is good as long as it is purple. Put under oath, I would admit that my preference matters more to me than to the fish. This time of the season, they are triggered by the wake, not the hue.

The zenith of the sport is reached when you find what, in steelhead parlance, is called a “player.” A player is a fish that will slash at your waking fly—only to think better of it at the last second, leaving a washtub-size hole in the river. As long as you can control your heart and resist the impulse to strike until you feel the weight of the fish, it is not uncommon to have a player come back to the fly three or four times on the same cast, or after multiple casts, for that matter.

I am thinking of a tailout in British Columbia’s Bulkley River that you have to hike railroad tracks to find. The Bulkley is known for surface-oriented steelhead, but I had never had luck in the past. That changed when a steelhead boiled behind my Muddler, then pulled hard once as I finished out the swing. I let the fly dangle: No cigar. I made the same cast: Nothing doing. I backed up about 20 feet and came down with the aforementioned small wet fly—a last-resort tactic that had worked under similar circumstances in other rivers. Not this time. So I continued fishing and an hour later was back at the tailout for one last try.

The purple Muddler still looked good, and, starting high, I worked down to the bucket where I had first encountered the fish. This time there was no doubt. The water simply erupted, and the steelhead, hooked solidly, jumped stiff-sided again and again, falling away like dominoes—if those dominoes weighed 15 pounds and carried a purple pewter sheen.

Perhaps there is more exciting fishing, but I’ve circled the globe with a fly rod and have yet to find it.

October: Roar of the Freight Train

If you believe the legend, noted fly-tier Randall Kauffman was fishing the Deschutes River when he hooked a steelhead just as a freight train was thundering up the canyon. The unnamed fly he removed from the maw of the great trout was christened on the spot.

The Freight Train is one of several traditional steelhead wet flies with a railroad theme. Others include the Signal Light, Coal Car, and Flat Car. All have in common a dark hackle, sometimes tied over a white underwing, with a band of bright color at the butt—chartreuse, hot orange, or both. I have fished for steelhead too long to believe that pattern has much to do with success, but fly size, silhouette, and color do, and a black or purple fly sporting a spot of color is my first choice when water temperatures begin to fall in October.

I have fished the Deschutes for years and caught steelhead on the Freight Train there, but the most memorable encounter the fly rewarded me with was on another great river followed by a railroad track—Idaho’s Clearwater. I was fishing the Cable Run when I felt a tug. Now, a tug can mean your hook has caught on a leaf, or it can mean a smolt or small trout has nipped at it. But it can also mean you have piqued the curiosity of a steelhead, and in the Clearwater, steelhead can reach 30 pounds.

I went right back at the fish—if in fact it was a fish. Nada. I traded the Freight Train for a smaller fly. No dice. I then broke one of the commandments of steelhead fishing: Never leave steelhead to find steelhead. I reeled up and spent the next couple of days on the Grande Ronde, a more intimate river with better camping, although the fish are smaller.

Sin aside, it turned out to be a good move. I caught several steelhead, all on that same No. 4 Freight Train, and in the evening turned on my transistor radio and managed to catch a few innings of the World Series—Boston vs. St. Louis. I couldn’t, however, forget about the tug. I fished my last day on the Ronde, slept in my rig, and rose early with an hour-and-a-half drive in front of me.

Dawn found me back at the top of the Cable Run with the Freight Train, which was looking a bit threadbare, knotted to a 12-pound tippet. Cast, step, cast, step… As my fly swung closer to the sweet spot where I’d felt the tug three days before, my hopes rose. I found my hands had a tremor. This time, there was no tug—just one ripping yank, and seconds later, the steelhead was jumping upstream while the rod tip still pointed down. Time stands still when you hook a steelhead, and after you let it go, the world looks different. This one had a pink stripe almost a yard long, and I drove seven hours and got home in time to watch the Red Sox win their first World Series since 1918. The players would have to wait months to get their rings engraved. I already had my prize for the season. I hooked the fly in the corkboard above my desk, where it reminds me that all things are possible.

November: Day of the Intruder

The Intruder is the culmination of an effort by Northwest anglers to create the perfect winter steelhead fly—one with a pulsing action that suggests bulk while remaining light and relatively easy to cast. Intruder patterns accomplish this by incorporating marabou, fox fur, and/or ostrich herl, all of which breathe in water and, just as important, displace water, sending out vibrations that will attract steelhead.

For Intruder fishermen, the first month of consequence is November, when the last of the summer-run fish are turning dark, and winter-run fish, bright as polished silver, are getting their first taste of sweet water. Biologically, winter fish differ from summer ones in that they’re sexually mature when they enter the river system and seldom swim more than a few dozen miles before spawning; summer runs can travel more than 500 miles and mature over a course of months.

As far as the angler is concerned, what is important to note is that winter fish, holding deep in cold water, are reluctant to move for a fly and will seldom look up. Fresh from feeding on baitfish and shrimp, they prefer large, bright flies fished deep in the water column and colors associated with either ocean feeding or spawning—pink, orange, red, chartreuse, even electric blue. My own preference is pink with an overwing of lavender or purple, although you really can’t go wrong with all pink.

This is not to say that you can’t catch winter fish on small, drab flies or summer fish on hot orange Intruders. Nothing in steelheading is absolute. But if your mantra is The tug is the drug, and experiencing a jolting take is part of what brings you to the river, little can compare to a 20-pound chromer with sea lice on its flanks smashing a 4-inch fly.

On Washington’s Olympic Peninsula, in a valley shaded by giant cedars and smothered by ferns that grow as high as your waist, there flows a river of legend. Giant steelhead put it on the map. Good-looking vampires did too—at least, they did in the movies. I don’t remember my cast, and my hand would never touch him, but he was close enough several times that I could see that far-seeing eye that had guided him on the wheel of his journey in the dark Pacific and the twin pits of his nostrils that, three years later, had brought him unerringly back to the river of his birth. When the hook pulled finally, I sat on a log and just breathed. I knew even then, despite the arrogance of youth, that I would never come close to hooking a steelhead to rival him, either in heart or in size.

The trailing hook of the Intruder had partially straightened. I stuck it in the sheepskin patch in my hat, then, thinking I might come back some day, scraped some moss from a hemlock tree and buried the hook in it, as deep as I could work it in. It is long gone now, of course—the rains of the Olympic Peninsula make short work of high-carbon steel—and in fact, I never returned to that river.

It flows, as do so many now, only in my dreams.