Gar-Gantuans: 10 of the Biggest Alligator Gar Ever Caught

Huge alligator gar have lurked in our lakes and rivers since the age of the dinosaurs. Here are some of the very biggest ever taken, including a trio of 300-pounders 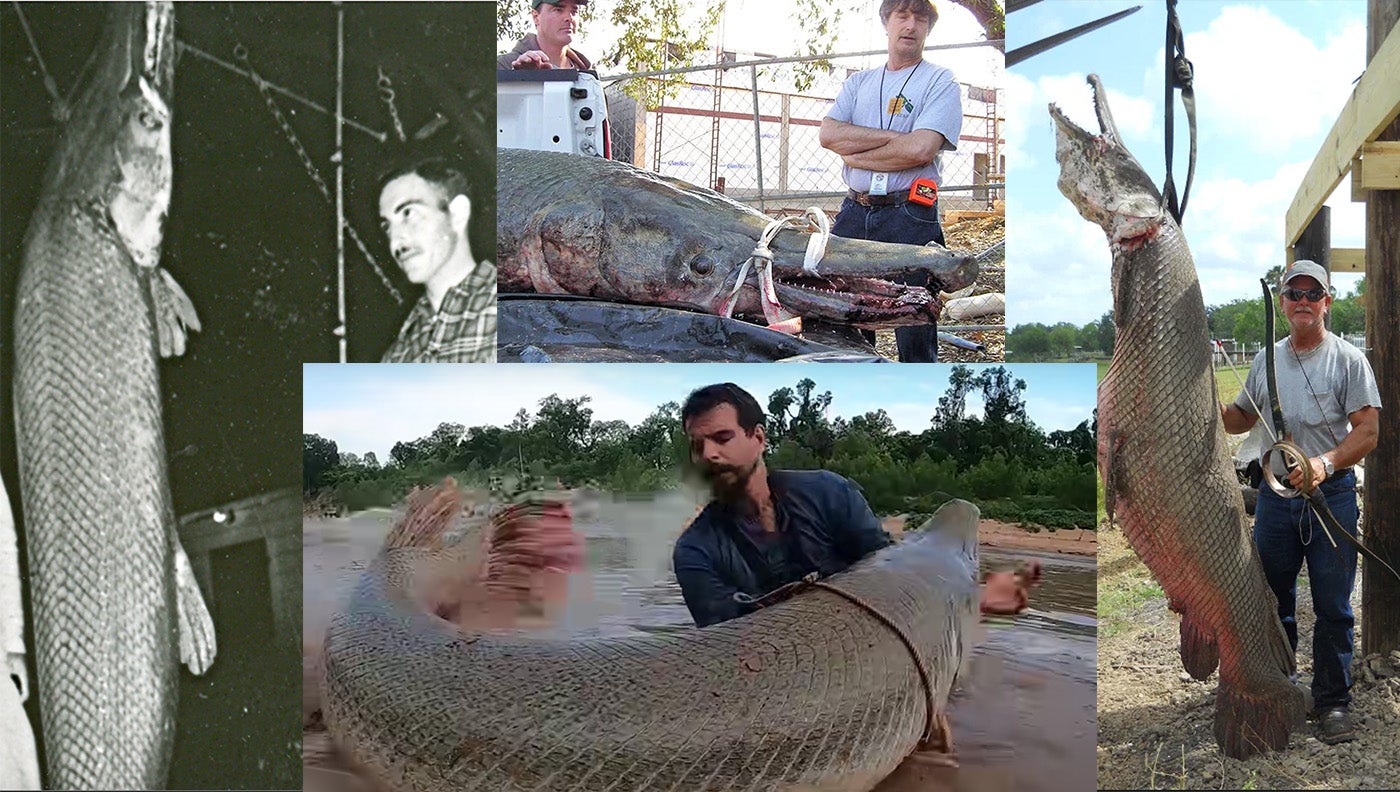 The term “river monster” seems made for the alligator gar. This prehistoric-looking creature named for its resemblance to the American alligator could have been dreamed up by a Hollywood special-effects master: the long snout crammed with double rows of needle-like teeth, the protective covering of interlocking scales prized by Native Americans for armor and arrowheads, and the sleek, torpedo-shaped body all appear purpose-built for combat. In reality, alligator gar are shy, docile creatures that can live for decades. Second only to white sturgeon among freshwater fish when it comes to sheer heft, these slow-growing fish can take half a century to reach a trophy length of 7 feet, and specimens topping 8 feet have been estimated at 80 to 90 years old.

Unlike sturgeon, though, which are heavily protected in many parts of their North American range, the largest of the gar sub-species thrives across much of the South and lower Midwest. Historically considered a “trash fish” by many, alligator gar are becoming an increasingly targeted species among recreational anglers. In Texas, which for decades has boasted some of the healthiest overall populations and most impressive individual specimens, wildlife officials instituted a one-per-day limit on alligator gar in 2009 and now manage the fish as a regulated non-game species. It seems to be working: Decades-old alligator gar that top 200 pounds are far from rare, and 300-pounders—once found mostly in fishing lore and dusty old record books—are increasingly turning up in the social media feeds of anglers and guides who pursue the sharp-toothed giants for their fight and—conventional wisdom be damned—for their flavor. Here are 10 of the biggest alligator gar ever caught.

The largest documented alligator gar we could verify this 327-pounder that measured 8-feet, 5-inches long with a girth of 47 inches. Commercial fisherman Kenny Williams discovered the fish tangled in a net he’d put out for buffalo on Mississippi’s Lake Chotard on Valentine’s Day 2011. With his boat already loaded with nearly a week’s quota of rough fish, Williams struggled for half an hour to untangle the gar and get it in his boat, he told Field & Stream in 2011. Then he motored slowly back to shore with only 4 inches of freeboard. The fish, already weak when he found it, died soon after, and Williams donated it to the Mississippi Museum of Natural Science in Jackson. Its age has been estimated at between 70 and 95 years.

Brent Crawford wasn’t even fishing when a friend alerted him to a “car-sized” fish in a canal near his house on Lake Corpus Christi in 2012. Crawford grabbed his bow and, after watching the massive gar for nearly 45 minutes, finally got a shot. According to newspaper accounts, he thought he’d missed, only to realize why the line attached to his arrow wasn’t moving: a coil of cord had fallen off the reel and lay at his feet. Thinking he’d forgotten to secure the line, he quickly wrapped it around his hand—just as the fish jerked it taut, pulling Crawford head-first into the water.

“At that point I was just trying to keep my feet on the ground,” Crawford told the Corpus Christi Caller. “There was no doubt who was in control and it wasn’t me. It was a tug of war now.” After nearly an hour, he won the war. Reeling the gar into shallow water, he was able to grab it by the gills and drag it to the bank. Then he sat on it until a neighbor fetched a pistol, which Crawford used to dispatch the fish. The huge gar reportedly bottomed out a 300-pound scale, but Crawford didn’t think to contact Texas Parks and Wildlife about getting an official weight, which he later called “a big mistake.” It measured 8-feet, 2-inches, more than half a foot longer than the state record.

The IGFA all-tackle record alligator gar was caught in the Rio Grande River by Bill Valverde all the way back in 1951. The Texas native and Word War II veteran was using a homemade bamboo rod baited with mullet to target catfish one early December day. Instead, he caught five gar. Four weighed between 75 and 100 pounds. The fifth, which stretched 93 inches long, later tipped a meat-market scale at 279 pounds flat—and that was after Valverde drove home with the massive fish tied to his spare tire, its tail dragging the whole way. Not only does Valverde’s catch top IGFA’s list, it’s also the heaviest documented freshwater fish ever taken on a rod-and-reel in Texas, and—after more than 70 years in the books—the state’s longest-standing freshwater rod-and-reel record.

The Texas record book does list one alligator gar that is larger than Bill Valverde’s world-record fish, but there’s an asterisk: This one was caught on a trotline by T.C. Pierce Jr. on January 1, 1953, in the Nueces River. Not much is known about Pierce or his mammoth catch, which weighed 302-pounds and stretched 90 inches long—but it must have been a heck of a way to celebrate New Year’s Day.

Proving that 300-pound gar are not just memories from the good old days, Payton Moore caught (wrestled might be a more accurate word) a massive alligator gar in May from a bayou near Houston, and he got the entire adventure on camera. Moore released the fish, but not before using a rope to restrain it long enough to measure its length (8-feet, 2-inches) and girth (48 inches), which he used to estimate the gar’s weight at 300 pounds. “If you take anything away from this video, it should be the very good news that fish of this size are still here and that they are worthy of our protection,” Moore wrote on his YouTube page, where the video is posted. “Alligator gar are incredible animals and are very important to the ecosystems they inhabit.” You can read the full story of his catch here.

Sometimes a fish’s size can work against it. That was the case with a 7-foot, 9-inch alligator gar reeled in by Cleveland, Texas, angler Joseph Williams in April 2011. According to news reports, Williams first weighed the fish on a reliable but uncertified scale and registered 230 pounds. The only certified scale big enough to handle the whopper was a truck-stop scale that weighed in 50-pound increments only. As a result, the official weight entered in the Texas record book is 200 pounds—almost certainly an understatement of this impressive gator’s true size, but still good enough to stand as the rod-and-reel record on the Trinity River, the Lone Star State’s alligator gar mecca. Efforts to release the fish unfortunately failed. Later that summer, on July 4, Williams secured another record, catching an 88-inch alligator gar on the Trinity that set the Texas catch-and-release record for the species.

It didn’t take Hunter Blasingame long to hook up with a trophy alligator gar on a Father’s Day bowfishing trip with gar guide Scott Meshell in June 2020. Blasingame’s shot came only 10 minutes into the trip when the 7-foot, 7-inch fish surfaced beside the boat. The fish dove to the bottom after the shot, and Blasingame was able to work it to the surface and get a second arrow in. Meshell, who runs South Texas Bowfishing, regularly encounters 7-footers in his favorite gar hotspots, which he keeps a closely guarded secret. Blasingame’s fish weighed 247 pounds and had a girth of 47 inches.

In May 2021, less than a year after guiding Blasingame to his monster, Meshell took first place in the annual bowfishing South Texas Gar Tournament with a 210-pound alligator gar of his own. His team was one of two that weighed in a 200-plus pound gar in the tournament. The 8-foot, 3½-nch behemoth is one of four 8-footers that Meshell has shot in his guiding and fishing career.

Kayak angler Chris Hernandez landed a 7-foot, 200-pound alligator gar while fishing near his hometown of San Benito, Texas, in 2019. The 44-year-old barber and triathlete needed every bit of stamina he could muster to subdue the fish, which nearly flipped his kayak with a swipe of its tail. After the gar towed him up and down the river for 40 minutes, Hernandez managed to bring it to shore by paddling with one hand and holding his rod with the other. His cousin helped him drag the fish onto the levee. “It was a really, really intense fight,” Hernandez told NPR. “My body was just so tired, man. Like I said, at one point, I thought I was going to lose my rod to this dinosaur of a gar.”