F&S Classics: Can I Tell You Something?

In this week's selection from the archives, the author and a friend go fishing for bass—and consider the time they have left as outdoorsmen 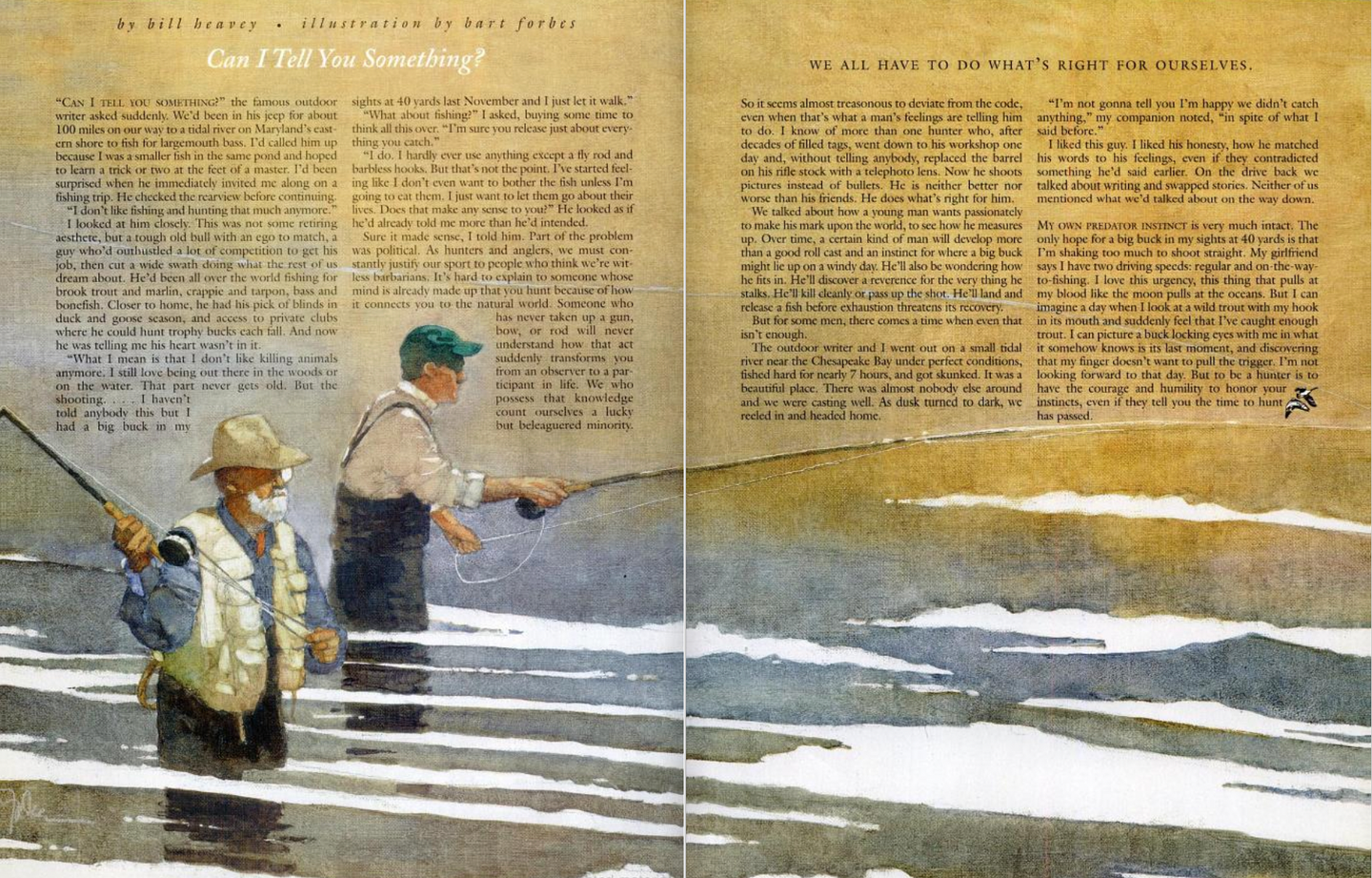 “Can I tell you something?” the famous outdoor writer asked suddenly. We’d been in his jeep for about 100 miles on our way to a tidal river on Maryland’s eastern shore to fish for largemouth bass. I’d called him up because I was a smaller fish in the same pond and hoped to learn a trick or two at the feet of a master. I’d been surprised when he immediately invited me along on a fishing trip. He checked the rearview before continuing.

“I don’t like fishing and hunting that much anymore.”

I looked at him closely. This was not some retiring aesthete, but a tough old bull with an ego to match, a guy who’d outhustled a lot of competition to get his job, then cut a wide swath doing what the rest of us dream about. He’d been all over the world fishing for brook trout and marlin, crappie and tarpon, bass and bonefish. Closer to home, he had his pick of blinds in duck and goose season, and access to private clubs where he could hunt trophy bucks each fall. And now he was telling me his heart wasn’t in it.

“What I mean is that I don’t like killing animals anymore. I still love being out there in the woods or on the water. That part never gets old. But the shooting…. I haven’t told anybody this but I had a big buck in my sights at 40 yards last November and I just let it walk.”

“What about fishing?” I asked, buying some time to think all this over. “I’m sure you release just about everything you catch.”

“I do. I hardly ever use anything except a fly rod and barbless hooks. But that’s not the point. I’ve started feeling like I don’t even want to bother the fish unless I’m going to eat them. I just want to let them go about their lives. Does that make any sense to you?” He looked as if he’d already told me more than he’d intended.

Sure it made sense, I told him. Part of the problem was political. As hunters and anglers, we must constantly justify our sport to people who think we’re witless barbarians. It’s hard to explain to someone whose mind is already made up that you hunt because of how it connects you to the natural world. Someone who has never taken up a gun, bow, or rod will never understand how that act suddenly transforms you from an observer to a participant in life. We who possess that knowledge count ourselves a lucky but beleaguered minority.

So it seems almost treasonous to deviate from the code, even when that’s what a man’s feelings are telling him to do. I know of more than one hunter who, after decades of filled tags, went down to his workshop one day and, without telling anybody, replaced the barrel on his rifle stock with a telephoto lens. Now he shoots pictures instead of bullets. He is neither better nor worse than his friends. He does what’s right for him.

We talked about how a young man wants passionately to make his mark upon the world, to see how he measures up. Over time, a certain kind of man will develop more than a good roll cast and an instinct for where a big buck might lie up on a windy day. He’ll also be wondering how he fits in. He’ll discover a reverence for the very thing he stalks. He’ll kill cleanly or pass up the shot. He’ll land and release a fish before exhaustion threatens its recovery.

But for some men, there comes a time when even that isn’t enough.

The outdoor writer and I went out on a small tidal river near the Chesapeake Bay under perfect conditions, fished hard for nearly seven hours, and got skunked. It was a beautiful place. There was almost nobody else around and we were casting well. As dusk turned to dark, we reeled in and headed home.

“I’m not gonna tell you I’m happy we didn’t catch anything,” my companion noted, “in spite of what I said before.”

I liked this guy. I liked his honesty, how he matched his words to his feelings, even if they contradicted something he’d said earlier. On the drive back we talked about writing and swapped stories. Neither of us mentioned what we’d talked about on the way down.

My own predator instinct is very much intact. The only hope for a big buck in my sights at 40 yards is that I’m shaking too much to shoot straight. My girlfriend says I have two driving speeds: regular and on-the-way-to-fishing. I love this urgency, this thing that pulls at my blood like the moon pulls at the oceans. But I can imagine a day when I look at a wild trout with my hook in its mouth and suddenly feel that I’ve caught enough trout. I can picture a buck locking eyes with me in what it somehow knows is its last moment, and discovering that my finger doesn’t want to pull the trigger. I’m not looking forward to that day. But to be a hunter is to have the courage and humility to honor your instincts, even if they tell you the time to hunt has passed.