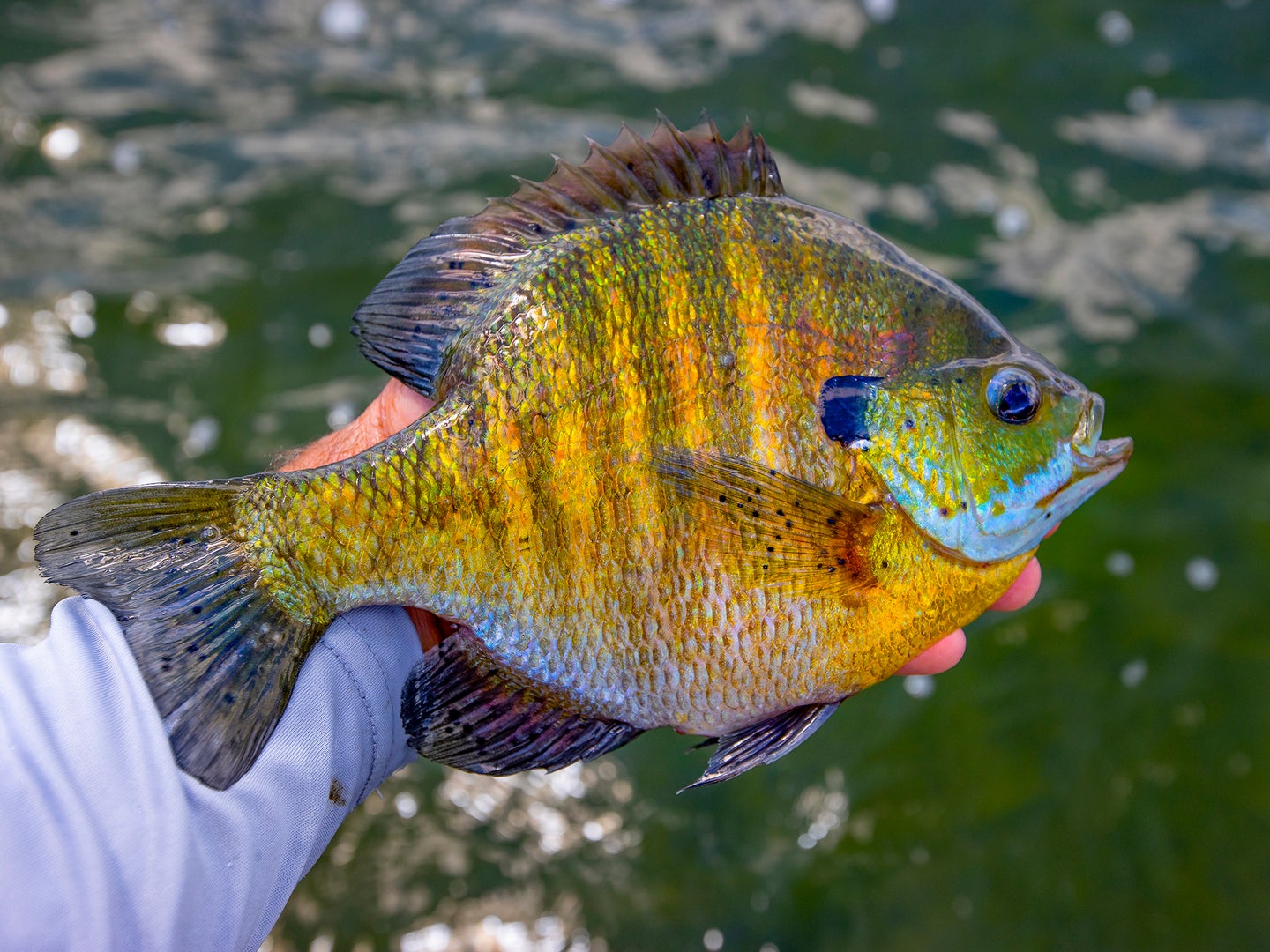 You’d need an extra-large “pan” to cook this panfish. Or you could just release the trophy. Tom Martineau/The Raw Spirit

Fishing and hunting both have their action-packed moments. But it’s the still, quiet stretches of time that test our skill the most

THE FLY LINE straightens out 3 feet above the water, and the popping bug hits the pond with a pleasing splat. I see the popper try to roll over, which tells me I have a bit of twist in the leader that I should probably take care of. But that little bit of movement sends a few microripples quivering on the water’s surface, so I let it ride. That just might be the ticket.

It is late June, so it’s past the peak of the bluegill bedding season, when fat bream would smack every bug and fly almost as soon as it hit the water. Now the fish have scattered, with a few late bloomers on the bed, but most sulking here, there, and yonder in the pond. These days, the bluegill popping-bug game is a waiting game. More precisely, it’s a matter of how long to wait.

Do I twitch the bug to prompt a strike? Or let it be, so the prospect of an easy meal becomes too much for a bluegill to turn down? And how long do I let it sit there, suspended in that thin lens that lies between two worlds, before I rip it off in a backcast and fire it a few feet down the bank?

I give the bug a full 15 seconds without a twitch, trying to remain still and stealthy in the float tube. There is a sort of exquisite agony about the tension. Do I stick with what I’ve got, or recast? Honestly, I never know what’s the best approach. And the waiting is the hardest part.

There are times when it seems that’s what we mostly do while fishing and hunting: wait. We wait on the sun, wait on the bobber, wait on the deer, wait on the tip-up, wait on the ducks. There’s plenty of action framing those long minutes and hours waiting, hoofing it to distant woods and waters. But then, often, we wait.

Unfortunately, there’s a tendency these days to think of waiting as a waste of our time. We fill these interstitial time periods—in line at the pharmacist, in line for our turn at the drive-through, sitting in a deer stand, even—with social media or podcasts or music piped straight into our brains via earbuds. We’ve been raised with a moral imperative that you shouldn’t waste a single second, and, when you have to wait on anything, to fill the space with something. I blame, in part, Aesop’s fable “The Ant and the Grasshopper.” I’m not saying that the grasshopper shouldn’t have put in his 40 hours. But that poor bug couldn’t enjoy even a few moments alone with his fiddle without some busybody worker ant harping about how time is gold.

Idle hands, as they say down he-yah, are the devil’s workshop. Get busy.

But there are lessons to learn from a sort of anticipatory waiting, the sort we do while fishing and hunting. Waiting is a discipline, which needs to be practiced. Waiting is also a muscle, and like any muscle, it can wither and atrophy if it goes unused. But when used well, waiting becomes a sort of communion—with the natural world, with ourselves.

And while we wait, something is happening. The deer make their way from the tangles to the open woods. The bluegill watches that popping bug, analyzing, in whatever way a fish can analyze, its shape and color and whether it is real or not.

In some cases, it’s a cost-benefit analysis and almost a war of wills. How long can I tough it out in this stand? How long do we stay in the swamp? How long do I let a popping bug lie?

The bluegill smacks the popper with a porpoising strike, half its body arcing out of the water, and the 5-weight fly rod bends to the task. I give the fish a bit of line—to prolong the fight as much as to steer the bluegill clear of a blown-down tree—and grin. I was a half second away from recasting the fly. I’d waited long enough. Or so I thought.

Now I kick around the shore to get within casting distance of the corner of the pond dam. There’s a shelf of shallow water there, next to the deeper water at the dam, and the transition often holds fish that are trying to make up their minds about where they want to be.

I cast the bug into the deep shade along the shore and let it sit. Nothing. I twitch the popper with a quick little strip, let it sit. More of the same. A wood thrush calls from the pinewoods. Daylight is slipping away.

I kick the float tube 10 feet along the bank, recast, and let the bug settle. I watch the ripples flatten out and dissipate. Let the water still. Flex the waiting muscle. It’s not long before I start to twitch. This waiting thing is hard.

We think time is ever more valuable these days, but I remember an old friend who mused about time, near the end of his time, and his position was equal parts inspiring and damning. “Let me tell you about time,” he said. “Each of us has the same amount: All there is.”

Purposeful action will shape the future, and waiting is just as purposeful as pounding out another cast. Hold your horses, I tell myself. Be ready. The popping bug is where it ought to be. Something’s going to happen. Something always does.