How To Slam River Smallmouths All Summer Long

Smallmouth bass fishing in small rivers and streams only gets better as summer heats up. Here's how to get in on the action 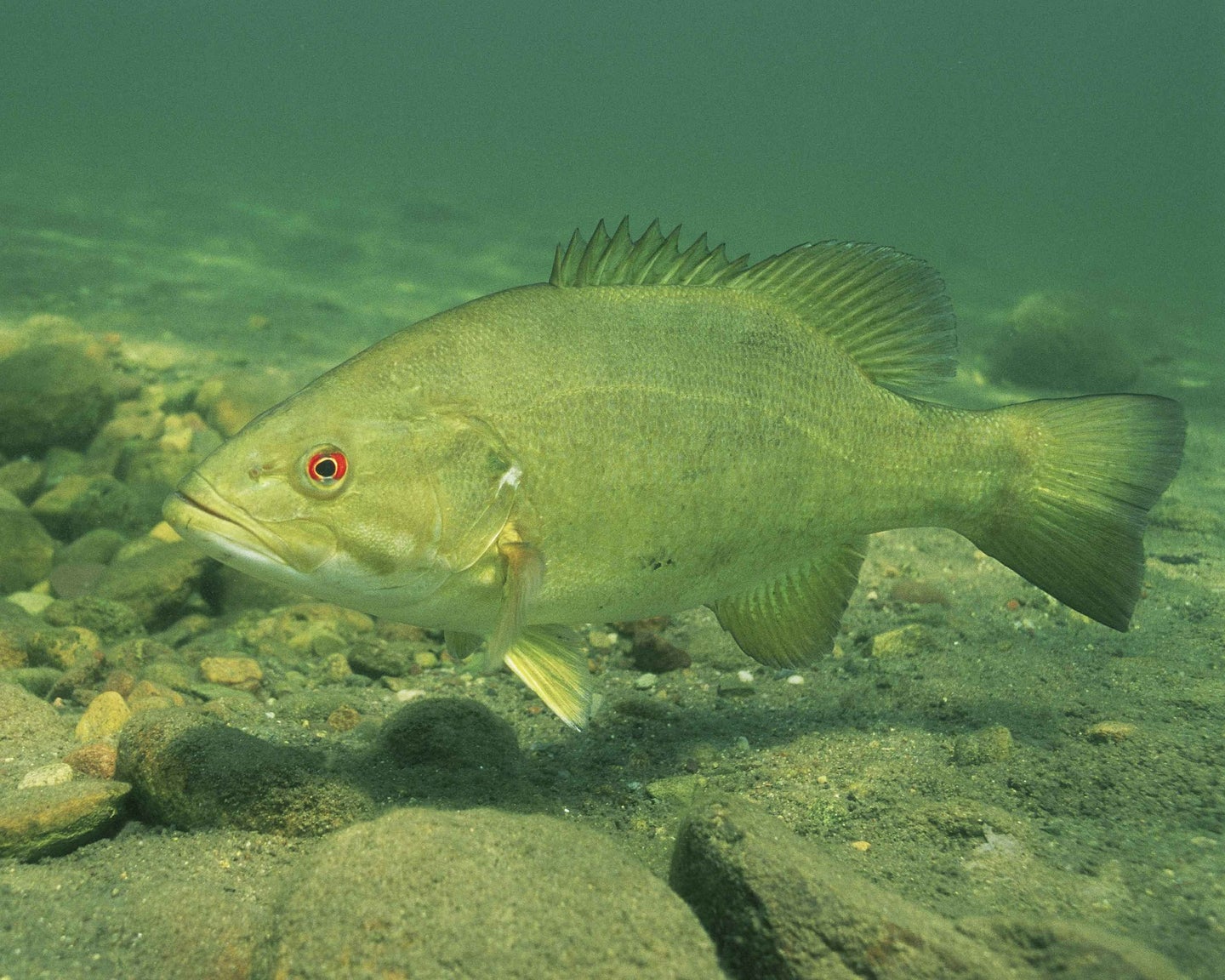 Your tiny lure hurtles downstream, seemingly struggling in the current, and then there’s a flash of brown and a close-quarters fight more dogged and rambunctious than you’ll get from any trout. While most of us hit small rivers and streams looking for rainbows, browns, and brookies, many warmer-water stretches promise as much or more action in the form of smallmouth bass.

Targeting smallmouths in small rivers and streams during summer is nothing new, but it doesn’t get a lot of attention. After all, the endeavor is relatively low-tech, and bass in such waters don’t often grow as heavy as their cousins in lakes, reservoirs, and larger rivers. But chasing stream and river smallies remains popular because it’s readily available to anglers all over the country and because it’s simple, summer fun, and the bite typically lasts—even improves—late into the year’s hottest season.

What You Need to Know About River Smallmouths

Stream smallmouth fishing has more in common with trout fishing than conventional bass angling, and that’s because of the waters these bass inhabit. For our purposes, let’s define small rivers as those you can wade or access from the shorelines or fish with small, unpowered watercraft. The characteristics of small bass waters vary throughout the fish’s range, but generally they resemble trout waters, with good current and abundant rock-and-gravel substrate, but they feature higher summer water temperatures (typically exceeding 72 degrees in the North). Some creeks and rivers only hold fish during a portion of the season and in specific spots, as bass can be nomadic, migrating relatively long distances in and out of those sections.

Small-river bass typically feed on crayfish, other crustaceans, small fish, insect larvae, and larger insects. Like stream trout, they position themselves in areas shielded from or next to relatively swift current and then ambush prey as it drifts past. In broad, deep pools, fish might roam more and feed aggressively during evenings or other periods.

Anglers in southern portions of the smallmouths’ range might find good stream fishing throughout the season, but the bite really gets going during mid- and late summer in the northern reaches of smallie country. In fact, the dog days of summer, when water temperatures reach their seasonal peak, often mark the peak stream smallmouth action. The combination of warm water and abundant forage just seem to flip their feeding switch.

Bass can be active throughout the day, but fishing generally improves as water warms into afternoons and evenings. Likewise, the shadows and low light of evening, or cloudy or overcast conditions, can boost activity. During bright, sunny conditions, bass often stay tight to shadows or cover.

As riverine fish, these smallies often have relatively slender profiles. Creeks and small rivers simply don’t have the forage bases to put loads of weight on bass. Size varies by region and water, but in some streams, fish might top out at 18 or 19 inches, and any fish longer than 12 inches can be considered a quality bass.

How to Catch River Smallmouths All Summer Long

One of the great appeals of stream smallmouth fishing is its simplicity. In most scenarios, you simply wade in the stream, float in a canoe or kayak, or, in areas with good access, walk the shoreline. Gear is also minimal. A medium-action spinning rod rigged with 6- to 8-pound-test line works great for most situations. And a small tackle box stuffed with jigs, plastics, spinners, small floating crankbaits, and a couple of surface lures provide everything you need to catch fish. Fly anglers can fool smallies with streamers, nymphs, or poppers.

As mentioned, the general strategy is a lot like trout fishing: Look for areas where bass can escape current and lie in wait for morsels traveling downstream. Good spots include deep pools, rocky riffless, undercut banks, midstream boulders or logs, and slow, relatively calm runs. Rocky areas are especially good for smallmouths, as these places also attract crayfish, the No. 1 prey of many river bass.

Presentations vary depending on conditions and personal preference. Spinners and surface baits work well for prompting reaction strikes when searching for active fish or plying large areas of fairly shallow water. Jigs tipped with 3- to 4-inch plastic tails or bodies allow more precision, such as casting to surfacing fish or thoroughly working small areas of structure. Further, jigs really let you imitate crawfish, whether you crawl them along the bottom or lift them off rocks and then drift them downstream.

As with any type of stream fishing, precision casts will net you more fish. Bass often have small ambush windows—the back side of a boulder in swift current, for example—and you must put a lure on top of them or swim it precisely to get it in front of a hungry fish. Trying to cast as close as possible to shoreline structure will get you hung up now and then, but losing a few lures is a small price for fooling a nice river bass.

Current can also be challenging. Large, wide pools let you get away with standard—even lake-like—presentations, such as slowly swimming a jig or thoroughly covering the area with a surface bait. In swift or snag-filled water, however, you must cast upstream and bring your presentation through or a likely area with precision. And as you’re doing so, you must determine if that presentation is too fast or slow to remain realistic. For example, it might be tough to maintain contact with the bottom while bouncing a 1/32-ounce jig through a run, and switching to a 1/16-ounce or heavier presentation would allow more control.

Moving-water bass can be aggressive, often blowing up on surface presentations or hammering jigs or spinners with a solid thump. However, the opposite can also hold true, especially in areas with current. Sometimes, bass merely stop a jig or quietly inhale a surface bait. Always watch your line for twitches or other movement that might indicate a fish has subtly taken a lure.

Enjoy the Fight and Then Release Your Fish

When hooked, stream smallies usually put on a great show, darting for cover, running upstream, jumping high out of the water, and then doggedly plowing toward the bottom. Try to land fish as quickly as possible, which helps them avoid exhaustion. Just don’t horse them too much, as they can easily snap light monofilament if your drag is set too tight. It’s a fine line you need to straddle. Small trout-style nets will help land and then release fish.

Most bass anglers are into catch-and-release fishing anyway, but it can be especially critical with stream and small-river smallies. As mentioned, fish grow slowly in such environments. Further, poor spawning conditions—spring flooding or high water that might wash away eggs and add sediment to streams—can almost wipe out entire year classes. And really, although bass aren’t bad to eat, you’re better off targeting panfish or walleyes for the pan.

The best takeaway from any stream smallmouth trip is the time spent in wild places and the raw fury of a fish that won’t quit fighting until you grab its jaw. And when you can slip that fish back into the water and watch it slowly swim away to battle again, the memory becomes even sweeter.