After the migration, a few "holdover" stripers remain in the Northeast. All you have to do is go out and catch them 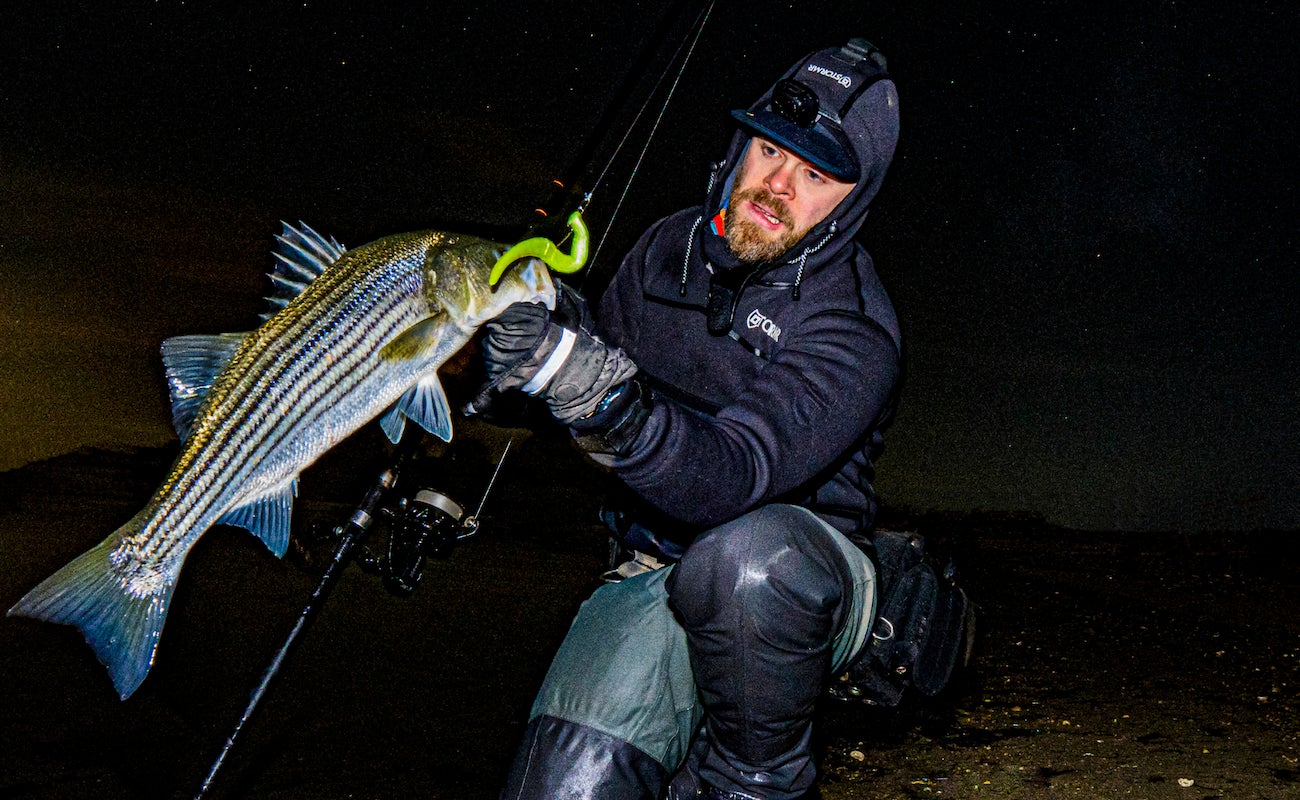 A small number of bass will stick around all winter long. Jerry Audet
SHARE

Halloween and Thanksgiving traditionally bookend what most East Coast surf anglers consider the peak of the fall run of striped bass from Southern Massachusetts through Northern Maryland. When I was younger, Turkey Day often marked the last hurrah for striped bass in Central New Jersey, but that’s no longer the case. While it’s hard to pinpoint exactly why, coastal migrations seem to extend later and later every season. Some say it’s because the ocean is getting warming. Others believe resurgences of specific baitfish populations are keeping them around longer. Regardless, you can enjoy winter striped bass fishing in the surf—right into the New Year—if you live within their range.

Winter striped bass fishing, however, often means catching smaller stripers, and there are two reasons why this is the case. First, smaller fish tend to migrate south behind the larger fish; when a consistent bite with 10-plus-pound bass suddenly gives way to 20- to 24-inchers in the same spots, it’s often a sign the coastal run is winding down. The other reason is because resident stripers that don’t migrate at all are usually smaller, and during the late season it’s not uncommon for these fish, which usually spend most of their time in back bays and inlets, to feed more heavily in the oceanfront surf.

The good news is that while the fish may not be as big as they were in October and November, you can catch piles of them. All it takes is a slight tweak to your standard surf gear, an understanding of what winter bass eat, and lesson on water temperature.

If you catch a big bluegill on a catfish rod, there won’t be much of a fight. Stick the same giant bluegill on a panfish rod rigged with 2-pound test and it’s going to scrap hard. The same idea applies to stripers in the surf. For most of the season 9- to 11-foot rods and reels spooled with 30-pound braided line or heavier are necessary to bomb big plugs and swimbaits, and to muscle bigger bass out of the waves. In the late season, however, it’s worth lightening up.

This time of year, I lean on an 8-foot, medium-action surf fishing rod, and I spool my reel with 15- or 20-pound braid. Not only does this combination maximize the fight of a smaller striper, but it also allows me to effectively deliver downsized lures. The uninitiated often assume the goal in surfcasting is always to launch a lure as far as possible, though that’s not necessarily true with late-season bass. Quite often, they’re feeding within 50 feet of the beach and may hit right at your feet. However, casting distance boils down to balance between rod, line, and lure, so my lighter surf outfit can still go long if I need the extra distance on a winter striped bass fishing trip.

As Christmas approaches, most of the bigger forage species have vacated the surf, especially in the northern reaches of the striper range. Mullet, peanut bunker, and adult menhaden may be long gone, but sand eels are often the holdouts. These thin silver baitfish migrate inshore in fall and can stick around well into early January, providing plenty of food for resident bass and the last waves of migrators. Best of all, sand eels are extremely easy to match.

All you really need is a classic diamond jig in a 2- or 3-ounce size. Of course you can also get fancier and try new-school epoxy jigs and pre-weighted soft-plastic sand eels, though kicking it old-school has advantages.

For starters, diamond jigs are very aerodynamic, so they’ll cast a mile even in a stiff onshore wind. There is also very little to working them—reel steadily and just fast enough that the jig is occasionally ticking the bottom. I use a 20-pound fluorocarbon leader with my diamond jigs, and to increase my odds of connecting even more, I rig a teaser approximately one foot ahead of my jig. Simply tie a dropper loop in the leader and thread on an unweighted fly like a Deceiver or Surf Candy. The teaser rig allows you to present two sand eel imitations simultaneously. It’s one of the oldest tricks in surfcasting, and I’ve had many days where the fly teaser outfishes the diamond jig.

As it goes with most fisheries, water temperature is everything—especially for winter striped bass fishing. If a striper bite in the surf is raging into December, rest assured it’s because the water temperature hasn’t caught up to the air temperature yet. Unlike a stream, pond, or lake that’s temperature can be rapidly altered by a few chilly days, the ocean is more complicated. It can be 20 degrees outside, but the south wind and offshore currents may be pushing water that’s still in the 50s up against the sand.

The ideal range for large stripers is roughly between 55 and 65 degrees, though anything 50 or warmer will have them on the feed. Smaller stripers, however, seem to have a better tolerance for colder water. I’ve had 20-fish days in water as cold as 45 degrees, and that’s an ocean temperature that’s very common to see into early January, particularly in the lower portion of the fishes’ range. Below 45 degrees, things start to get really tough barring influence from a warm-water discharge. So, find a website that offers surf temperatures in your area. My favorite is Surf-forecast.com, and it’s a great tool for letting me know whether it’s worth grabbing the surf rod and bundling up or just grabbing a blanket and surfing Netflix.