Roy Isaac thought the 4.42-pound monster panfish was a bass when he first hooked into it 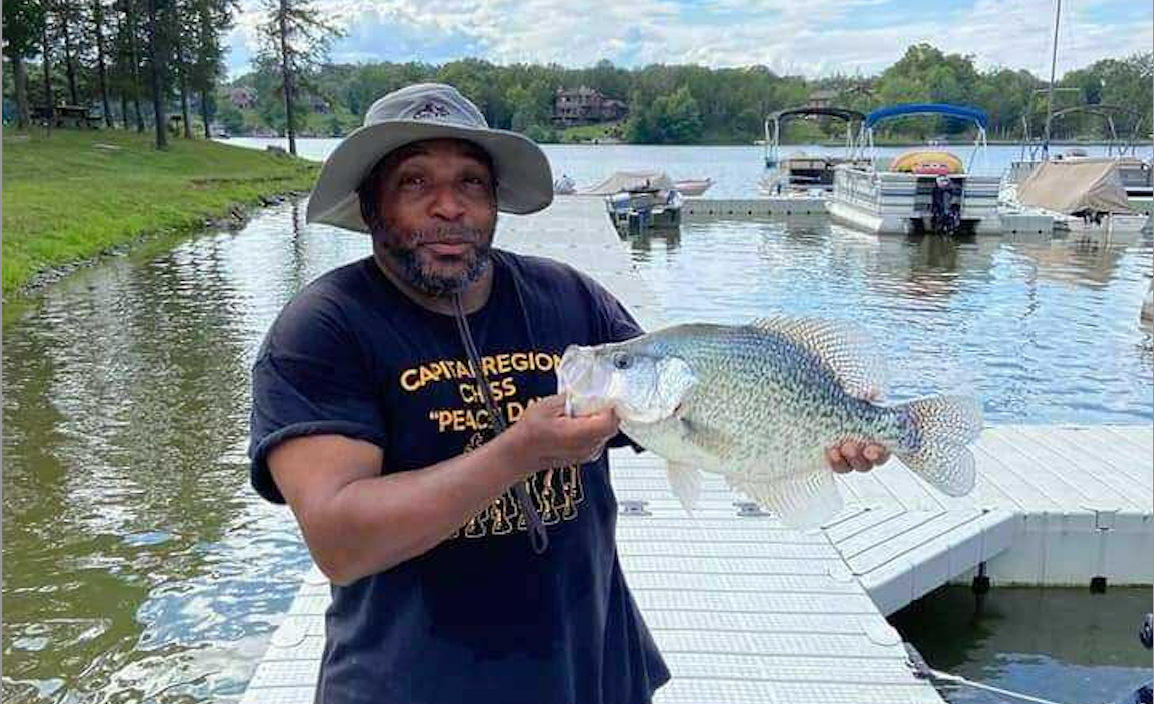 That's one heck of a panfish. Risa Getman
SHARE

Roy Isaac, 62, of Albany, New York, caught a 4-pound, 7-ounce crappie from Sleepy Hollow Lake last Saturday. Now, the New York Department of Environmental Conservation (DEC) has confirmed that Isaac’s catch is the new state-record white crappie. The fish not only smashed the previous state record for white crappie, which was a 3-pound 13-ouncer, but it’s the largest crappie ever caught in New York, as the current state record for black crappie is 4-pounds and 1-ounce.

Isaac was able to access Sleepy Hollow Lake, which is located in a private residential community, because his friend Abb lives there. Isaac fishes the lake regularly with his 7- and 14-year-old sons. He says it’s safe, clean, and holds big fish. He hooked into the pending record crappie from a dock where, in the weeks leading up to the record catch, he’d caught successively larger and larger crappie, starting with a 1-pound 7-ouncer, then a 2-pound 10-ouncer, and then a 3-pound, 10-ouncer a little over a week ago.

Isaac was using a live minnow for bait. He dropped it down 25-feet and was slowly jigging it up when the monster panfish struck. “All of a sudden, I got a hit,” he says. “But then nothing really happened. So I started bringing the bait up. As soon as I got it closer to the shore, the fish saw me and took off. It was a good thing I had my drag set right.”

Isaac was using 4-pound-test Berkley FireLine with an ultralight Pinnacle Gold Powertip rod and reel combo. At first, he thought the fish must be a bass because of how hard it fought. But he was ecstatic when he brought the fish up to the surface and realized it was a crappie. “It was a nice fight on 4-pound-test, believe me,” he says. “That boy had been there a long time. He was so thick and so big for a crappie. To get big like that, that fish had been eating pretty good.”

Len Greer, a longtime Sleepy Hollow Lake resident and member of the lake’s management committee, concurs: “My jaw dropped when I saw the crappie…I’ve never seen anything like it.'”

Isaac and Greer took the fish to get weighed at the certified scale at BlackHorse Farms, a local fruit and vegetable market. Isaac hopes to meet the previous state crappie record holder—and to beat his own record one day. He plans to get his current record mounted. Above all else, he’s especially glad to have landed the big panfish while out fishing with his sons.

Read Next: This 127-Pound “Dinosaur” Blue Catfish is a New State Record in North Carolina

“My 14-year-old son is funny,” says Isaac. “After I pulled it up, he was like ‘dad, you’re disgusting. Why should I be fishing right now? I’m going to be known as the son of the father that caught the record fish.’ He had me cracking up.”

Isaac adds that he couldn’t have pulled it off without the support of the community that contributes to making Sleepy Hollow a thriving fishery. For him, fishing is about far more than breaking records. “I just love fishing,” he says. “For one, it’s peace and tranquility. It allows you to get away from everything and get your thoughts together. I bring my boys because I just let them know that in today’s world, sometimes you need somewhere to go take a break.”