More than 1,700 tons of dead sea life have already been cleaned up—and it's not over yet 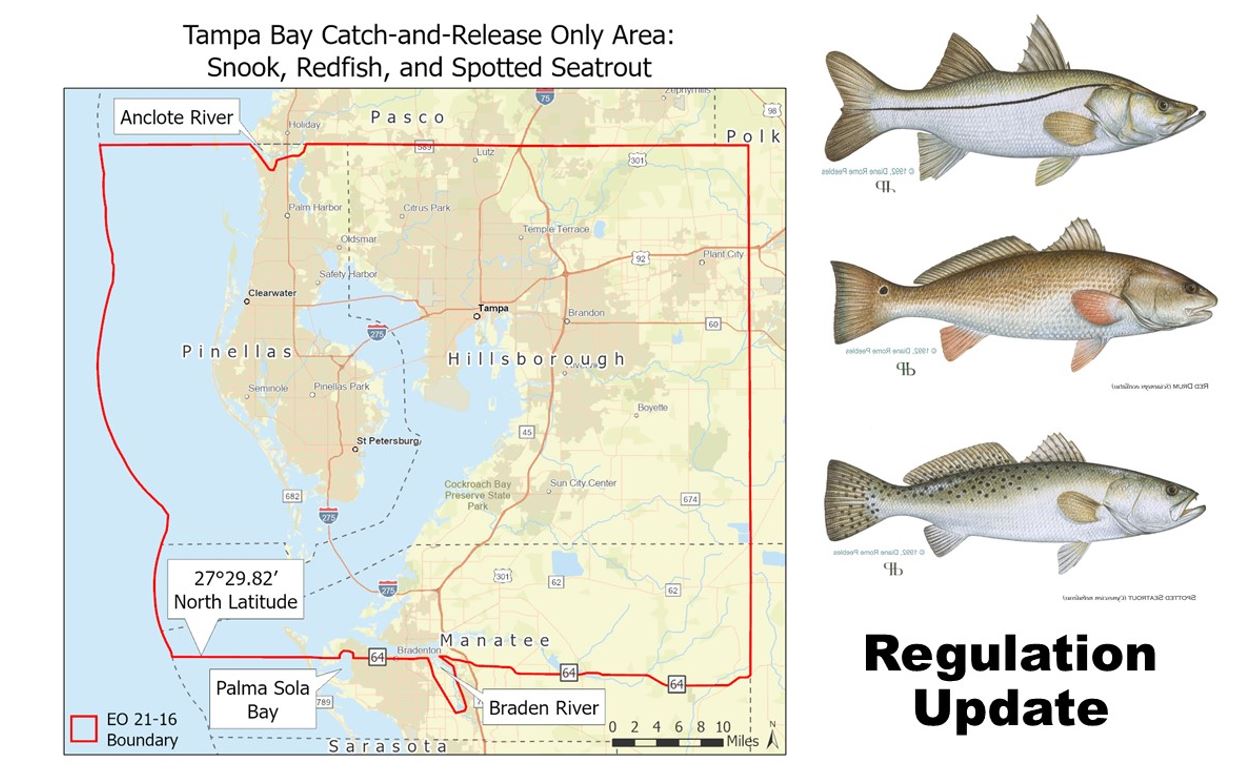 New catch-and-release regulations have been instituted on Florida's west coast as a result of the red tide's impact. FWC photo
SHARE

Florida’s Gulf Coast is experiencing its worst bloom of toxic red tide since 2018. Crews have collected 1,711 tons of dead sea life and debris from Pinellas County, which is just to the West of Tampa, Florida. The total, which is likely to increase in the coming weeks, is just short of the estimated 1,862 tons collected during the 2018 red tide bloom.

Red tides occur when the algae known as Karenia brevis blooms in large numbers. Severe outbreaks can cause respiratory illness and other harmful effects in humans, as well as kill fish, birds, and other marine life. Red tide is usually present offshore but winds, water currents, and other factors can move it closer to shore.

The 2018 bloom caused damage so severe that the Florida Fish and Wildlife Commission (FWC) declared that all redfish, snook, and trout caught in many Gulf Coast counties must be released as stocks rebuild. In Pinellas and Hillsborough counties, the moratorium on keeping these gamefish was lifted in May—only to be reimposed this July because of the latest red tide event.

Many people, including charter captains, are calling the outbreak the worst they’ve experienced. A discharge of more than 200 million gallons of polluted water from a defunct phosphate plant in April is suspected to be one of the sources of the Tampa Bay bloom. High concentrations of nitrogen and phosphorus fuel toxic phytoplankton growth. Several environmental groups have attempted to sue Florida’s government for failing to implement adequate regulations to prevent such a spill. In an interview with F&S, Governor Ron DeSantis said that he plans to hold HRK Holdings, LLC, the owner of the defunct phosphorus plant, accountable for the event and take action to prevent similar occurrences in the future.

Further south along the coast, high concentrations of fish kill have been reported around Stump Pass, which is home to one of the most popular fishing marinas in the Charlotte Harbor area. The FWC is monitoring the red tide and fish kills with helicopters, airplanes, and satellite imagery.

“In the case of a fish kill, we can get a little bit closer and we can even sometimes get a sense of which fish might be involved, what the size of those fish are,” Dr. Kate Hubbard, a FWC research scientist, told Tampa Bay’s Fox 13 News.

The University of South Florida’s College of Marine Science operates a “Red Tide Prediction and Tracking on the West Florida Shelf” page, which gives 5-day red tide forecasts. This week, severe conditions are predicted from Sarasota to Charlotte Harbor. Red tide events can extend over a year and inflict severe damage to Florida’s tourism economy. The Florida Department of Health advises people with severe or chronic respiratory conditions, such as emphysema or asthma, to avoid red tide areas.