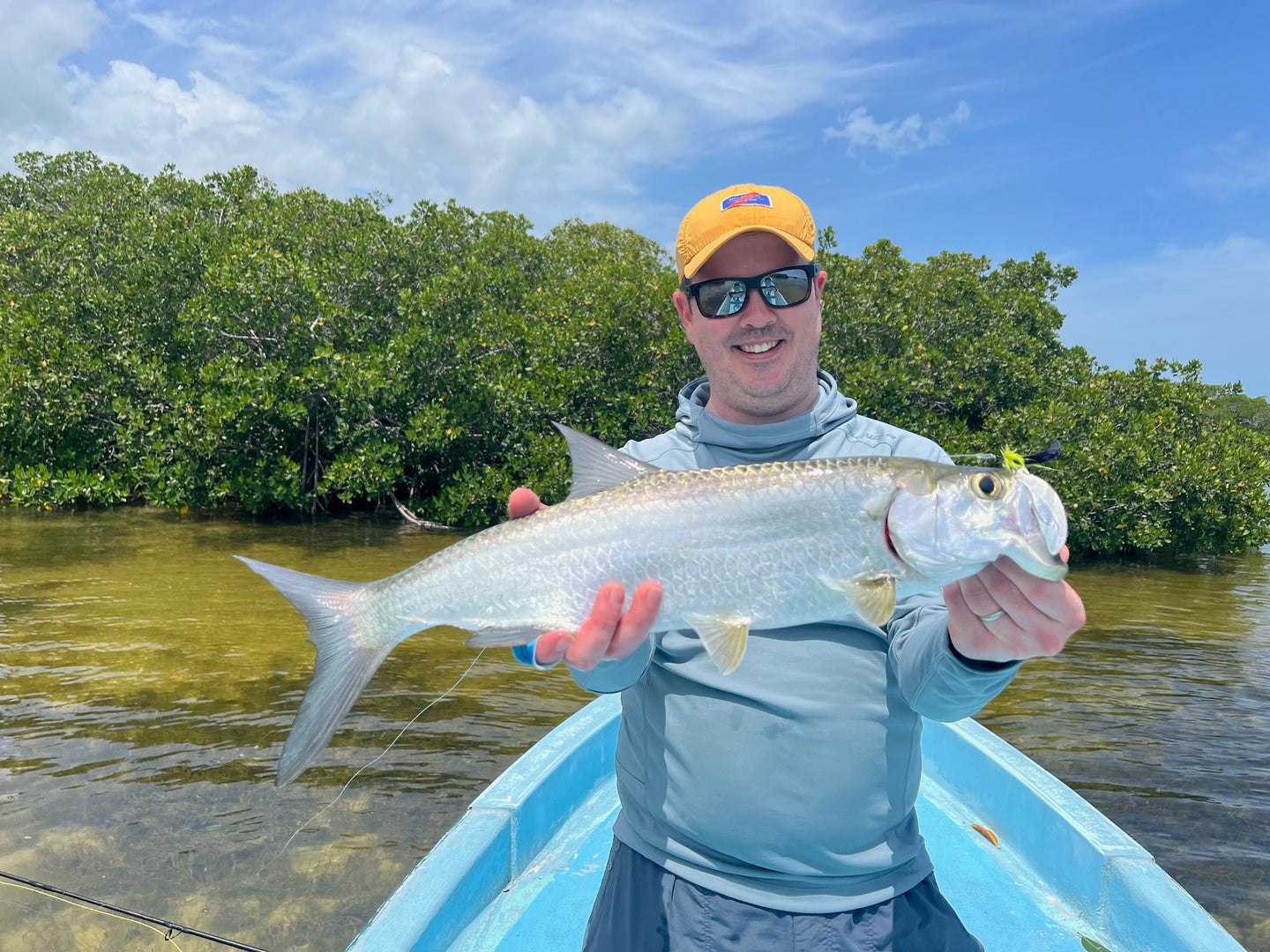 The author caught this tarpon in Holbox, Mexico, in May. Colin Kearns
SHARE

I woke up earlier than necessary so I could watch the sunrise on the beach as I rigged two fly rods—an 8-weight and a beefy 12. It’s one thing when you have an entire stretch of trout stream all to yourself. Having dibs on a swath of the ocean is something else, entirely. There was no one but me to watch the sun climb above the palms and transform the surface of the calm flats into a mood stone, morphing from black to blue to purple to fiery-orange. This solitude lasted maybe 20 minutes before the distant whirr of an outboard attached to an approaching panga broke the silence. I might’ve been annoyed by the interruption had the guy at the helm not been there to pick me up.

Flipper and I had first met almost at this exact spot a year ago when he guided me on my first-ever outing for tarpon on the fly. I landed three juvenile tarpon that day—but would’ve done far better had I not shown up with such rusty casting skills. For two weeks leading up to this trip, though, I again woke up earlier than necessary and walked to a park in my neighborhood and ran through drills that would replicate the kinds of quick-fire, moving-target casts I now knew to expect.

I handed my rods to Flipper, then climbed over the gunnel and into the panga. He inspected the sticks and smiled at the 12-weight—the big-gamer. “Let’s go look for some giants.” With that decided, he started the motor, jumped the boat on plane, and steered us toward the tarpon grounds.

My dream of jumping a 100-pound tarpon would have to wait. We idled in the open migratory waters, looking for rolling silver kings but saw none. After about an hour, Flipper suggested we switch to Plan B. “We’ll go catch some babies,” he said. I stowed the 12-weight and reached for the 8, as Flipper navigated toward the shallower, mangrove-lined lagoons where juvenile tarpon lurk.

I wish I could say that all of the practice I’d done paid off—that I made one perfect presentation after another, pulling juvie after juvie out of the mangroves—but that’s not how things went down. This time, at least, my casting wasn’t to blame. In fact, I barely got to cast at all. The tarpon were nowhere to be found, and the ones we did spot were not at all aggressive. I could land a fly well within their strike zone, and they wouldn’t budge.

“The water is too hot,” Flipper said. “The fish don’t want to move.”

Funny thing was, despite how slow the fishing was, time flew—and not because I was having fun (though, I wasn’t at all bored), but because I could feel my chances slipping away. In the last couple of years, I’ve become obsessed with tarpon fishing. I think about it constantly. Problem is, I live in New York City, which feels like it exists a galaxy away from the nearest tarpon flats. Targeting these fish isn’t exactly as simple as a drive to the nearest spring creek. So as Flipper poled the skiff from one fishless spot to the next—as the precious hours, minutes, seconds I had left with him as my guide ticked away—the idea of not only going home skunked, but also not knowing when the next time I’d be here would be, was almost heart-breaking.

Down to the Wire

I glanced at my watch: At best, I had 45 minutes left before we’d have to turn back. Obviously, I’d given up hope on a giant tarpon. Same goes for a day of non-stop action fighting juveniles. I just wanted one. I didn’t even need to land the fish. If I could just feel a strike, and I’d go home happy.

Flipper turned a corner. In front of me was this ultra-narrow alley of water between patches of mangroves, and at the end of it was a pod of four tarpon. My first cast was too short. My second one was good enough to turn a head. “Strip,” Flipper said. “Strip, strip… Stripstripstirp! Set!”

The hooked tarpon darted into the mangroves, and the fight seemed over before it ever got started. Flipper frantically poled the skiff into an open stretch, but it seemed impossible that I’d be able to pull the fish free without snapping my leader. But for the first time all day, luck was on our side: I eased the tarpon out of the mangroves and into the opening. Then, the real fight ensued.

The fish jumped, turned, charged, and jumped some more. The lagoon tarpon might be “babies” compared to the giants in the open ocean, but you should see the bend they can put into an 8-weight.

Flipper grabbed the fish at boatside, then handed it to me for a few quick photos. When I lowered the tarpon back into the water, I was almost thankful for the warmer-than-usual temperature, because it meant that I needed to hold onto, and revive, the fish for longer. I had come a long way and fished hard for this tarpon, and was in no rush to let go.