A good gift should be a surprise. The best are useful too. And the ones at the top of everyone's list stay useful for a long, long time 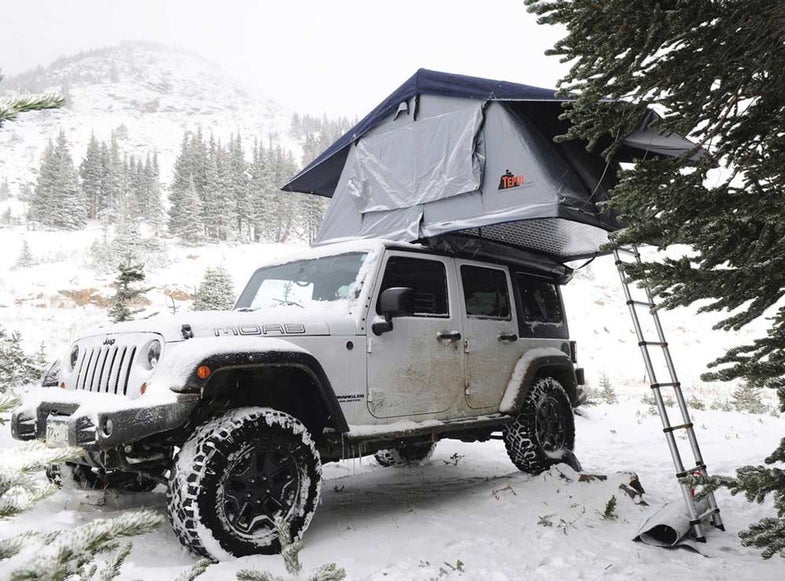 Nate Matthews, our Digital Director, is an adventure fishing junkie who lives on Long Island and spends most of his free time saltwater kayak fishing. Matthews is a little weird (he once wrote a story about fishing off an SUP), but he spends a lot of time outdoors and puts his gear through rigorous use in some pretty extreme conditions. This list is his, based off things he’s played with this year, mostly demo models sent in for testing. None of these products are cheap, not everything is new, but they are all useful, surprising, and designed to last a long time.

I sent one of these to my dad to test out this summer. He had just retired, bought a new truck, and was looking forward to doing a lot of car camping around Michigan and the upper midwest. These tents mount onto your roof racks, letting you set up a mobile base camp quickly and easily anywhere you can park a truck. “Mounting and setup resulted in an immediate increase in neighborhood gawkers, both on foot and by car,” he told me a few days after he first installed the tent. “One neighbor wanted to buy one. Two others wanted to sleep out in it.” The tent is plenty roomy for two, maybe three if you’re tiny, and the floor is padded like an air mattress. “Ten minutes after putting the truck in park we were warm and dry inside our sleeping bags, drifting off to a much-needed sleep,” he reported after one outing. Tent comes with ladder and mounts to most roof racks. $1,395

An Off-Road Hoverboard: One Wheel Plus

This one’s an odd inclusion in a hunting and fishing gift guide, but I got the chance to test it out through some connections at Popular Science and I did use it while fishing on the beach. I’m listing it here because it has just been a ton of fun to play with. The One Wheel is essentially an off-road hoverboard that makes any long walk feel like a carving session on a snowboard. Lean forward to go, lean back to slow down, lean sideways to turn. The powerful electric motor is smooth and fast, even when you’re going up hill. It’s got one big, soft wheel (stolen from a go kart) that eats up bumps and potholes and is surprisingly easy to balance on. Got a tree stand a couple miles up a logging road? You could use a One Wheel to get there quickly and quietly and without breaking a sweat. It’s great on grass, gravel, and even runs over firm sand, which let me scout a lot of beach this year ahead of surfcasting season. Biggest drawback is price. I would never have bought one of these without having used it first for free. But if I had the money now I would definitely pony up, because I’m going to hate having to give their demo model back. $1,499 • One Wheel

Also of use (in case you eat it on your One Wheel and tweak out your shoulder) is this beautifully designed aluminum stowaway trailer from Yakima. I’ve been cartopping fishing kayaks for years and have always disliked how most modern sit-on-tops exceed the load ratings of most roof racks. Throw two Hobie Outbacks up top on J-Bars and you’re asking for trouble if you use any kind of rack that’s not bolted to your frame. A trailer like this, which rates to 250 pounds (350 if you upgrade the suspension), gives me peace of mind when I’m traveling to fish, especially if the wind is blowing. It’s also nice not to have to clean-and-jerk 80 pounds of plastic onto the roof of my 4Runner at 4 a.m. The trailer folds up and rolls into small spaces if you’ve already got too much gear in your garage. $2,299

The last time I bought a pair of hiking boots I was just out of college and needed good ones for some backcountry field work in northwestern Montana. Those boots cost $250, but they lasted me 15 years. Like just about anything you use a lot, if you spend a little more up front you’ll generally save money over the long run. This year though was the last for my old boots, and I’ve been very happy with the ones that replaced them. LOWA’s Camino GTXs nail all the basics in fit and function and feature a bunch of extra smart design features, like a ball-bearing lacing system that helps you tighten them easily and tie them securely. I used them new out of the box on a four-day wilderness deer hunt in the Adirondacks, a great trip long on miles (and short on deer) that me and some other guys from the office have started holding every year. We covered about 8 miles a day through mostly pouring rain, still hunting wet, slippery, and steep mountain ridges, yet my feet felt almost fresh at the end of each day and I never felt a hot spot threaten from the lack of break in time. $300 is a lot of money, but it’s a good price for an investment like these.

This watch is light, tough, simple, and I like the way it looks. The case is carbon fiber, the face is sapphire crystal, and its hands and numbers glow with radioactive paint, making it easy to check the time in the dark without having to push a button. That’s a nice feature when you’re wearing gloves. The watch is waterproof up to 300 meters, though thank god I didn’t test it to that depth. It’s also shock proof, something I did test, as it survived scratch free after a direct hit on pavement (I wiped out on the One Wheel). $700