Flyfishing for Carp with Mulberry Flies 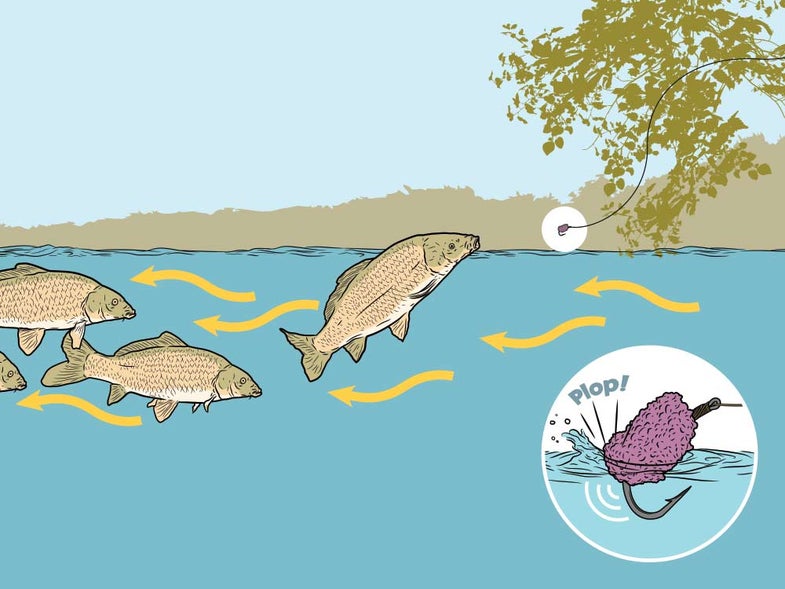 Carp are total jerks. Stalk them on the flats or in a clear river when they’re feeding on forage, like nymphs and crayfish, and they’ll snub your bugs, spook when you cast, and drive you to the brink of rod-­snapping madness. Or you can look for some under a mulberry tree, where they’ll feed with the same carefree vigor as a school of farm-pond bluegills. Depending on where you live, mulberry trees fruit from May through August, and if there are branches overhanging a river, rest assured every single carp in the area knows where to find them. As the breeze shakes berries off the tree, the carp swarm, and they can get so focused on gulping the juicy morsels off the surface that they’ll let their normally expletive-inducing guard down. This is your chance to nail a golden giant on the fly. Here’s how.

Wind is no friend of the fly-caster, but in the mulberry game, it can be your best buddy; the more berries hitting the water, the more frenzied the carp get. On days with a stiff breeze, I’ve witnessed dozens of carp lining up downstream of a tree like surface-feeding trout, moving in for a berry, then sliding to the back of the line to set up again. Of course, if there’s not a breath of wind, I may or may not have purposely snagged a tree a time or two just to give the branches a little shake and get the party started.

The plop of a mulberry hitting the water is what draws distant carp to the tree, and if your fly doesn’t closely match the surface-smacking tone of a natural berry, it can get refused—especially if the feeding activity isn’t hot and heavy. Carry foam berry flies with different densities—some cut from thick foam, others made of trimmed foam strips—so you can dial in the right notes. Color matters as well, so bring flies in a range from dark purple through bright red to match the current ripeness of the berries.

Usually when you’re flyfishing for carp, you want to lead the fish by a good distance, ­giving it time to find the fly on its own. But with mulberry flies, you want to practically hit the carp in the face. These fish have poor eyesight, so they’ll hear a berry, rise to sip it, and then drop back down. So pick a fish that’s moving toward the tree and plop your fly a foot in front of its snout. Most of the time that fish will strike; if it doesn’t, don’t expect it to follow your fly. Just strip in and be ready to cast at the next target.