In the Upper Paraná River of northeast Argentina, a combination of conservation efforts and perfect fishing conditions makes flyfishing for dorado of mythic proportions possible 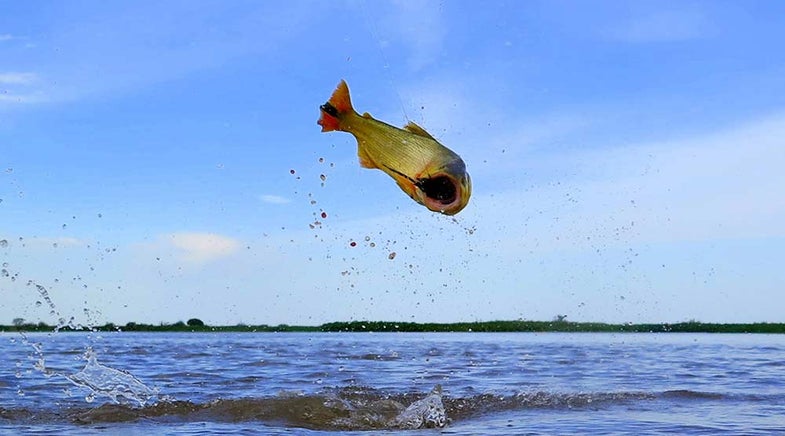 Marcelo Callegaris weaves the skiff in and out of the submerged trees lining the banks of Northeast Argentina’s Upper Paraná River, which is a mile wide in places and walled with dense green jungle reverberating with the throaty calls of howler monkeys. Large caiman bask on sandbars, and caranchos glide beneath low clouds. The air is so humid that my sunglasses keep fogging up and my shirt sticks to my skin. The fly line feels sticky in my hands, too, as I cast for golden dorado.

Marcelo, who co-owns the fishing lodge Parana On The Fly with fellow guide Andres Martínez, has tied a 6-inch black streamer onto 40-pound wire bite-tippet. I cast to a tight pocket between two gnarled branches. Following his instructions, I retrieve it with quick, foot-long strips, imitating a fleeing baitfish, as you might do when fishing for bass or trophy brown trout. No takers. I cast into the next pocket. We drift down the bank, methodically fishing each spot.

“Dorado are very territorial and will eat anything—even birds and snakes,” Marcelo told me earlier that afternoon while sipping yerba mate tea from a gourd. “If another fish comes too close, it’s in trouble. The same goes for your fly.” While I cast, Marcelo, who has been fishing these waters for more than 20 years, scans the area for sábalo—a carp-like species that grows to about 5 pounds and is the dorado’s primary prey. We soon encounter a school feeding on the mossy vegetation coating the limbs of a massive downed tree.

“Be ready,” Marcelo says. “The dorado are here.”

With a double-haul, I launch the fly upstream of the timber as big dorado are often found in front of a structure rather than behind it. I mend the floating line downstream, so the fly swings toward the tree trunk and, right before it snags, I start stripping it. Suddenly, I see a flash of gold in the swift current. An instant later, a dorado smashes the streamer in a loud explosion of water.

I strip-strike and the gleaming fish goes airborne, violently shaking its head like a tarpon as it tries to throw the hook, which dorado have a knack for doing. To keep the fish on, I use the tarpon fighting technique of “bowing to the king,” except this king is gold instead of silver. I point the tip of my 8-weight at the fish and refrain from applying more pressure until the fish lands. Once it does, the dorado surges toward the tree, threatening to tangle, or worse, snap my line in the branches. Luckily, lowering the rod to my side and bending it all the way down to the cork is enough to steer the fish out into open water.

Marcelo cranks up the engine and reverses into the main current as the fish peels line from my reel. Within seconds, I’m into my backing. The dorado shows no signs of letting up anytime soon. It leaps again, now in the middle of the river and swims in the direction of Paraguay.

Here There Be Los Tigres

According to a legend told in the communities lining the banks of the Upper Paraná, a villager named Angaa became so obsessed with gold that he turned his back on his own family to hoard more of it for himself. To punish Angaa for his greed, the all-seeing god Tupá turned him into a piece of solid gold that he then threw into the river, turning the fish gold, too, and making them just as insatiable as Angaa.

On the first evening of my weeklong stay at Parana On The Fly, located in the Corrientes Province, one of my guides, Lucas De Zan, showed me photographic proof of the dorado’s gluttony. He’d recently caught one that was still swallowing an otter, and the critter’s furry brown tail and hind paws protruded from the back of the fish’s throat. It should come as no surprise, then, that the dorado is known among locals as el tigre del río—the tiger of the river. The chance to catch another was what drew me back to the jungle for the second time from my home in Miami. I must have contracted what the guides call “gold fever.”

The upper section of the Rio Paraná, the second longest river in South America, flows for about 1,000 miles from the Brazilian Highlands to the junction of the Paraguay River. The roughly 120-mile-long stretch of river above this confluence and beneath the massive Yacyretá Hydroelectric Dam is where Parana On The Fly runs its trips. Here, the biggest dorado in the entire river system can be targeted with a fly rod because of the constant flow of clear water from the dam.

Moreover, gigantic submerged boulders, sunken trees, sandbars, undercut banks, and rocky points attract schools of sábalo. Argentina exports sábalo by the ton, but netting them is banned on the Upper Paraná, protecting this critical link in the food chain. As schools of sábalo move up and down the river, the dorado follow. Every so often, we witness a dorado suddenly ambush one near the surface; the violent attacks look and sound as if a cinder block has been dropped into the water. Once, we even spot a group of dorado corral their prey in the middle of the river before blitzing them like bluefish.

The Upper Paraná also owes its robust population of big dorado to federal and regional conservation efforts. In 2005, spurred by a vocal group of forward-thinking politicians from the Corrientes Province, the Argentine Congress declared the golden dorado a fish of national interest, requiring the provincial government of the Paraná River system to outlaw large-scale commercial fishing. A year later, the government made it illegal to export dorado and further regulated commercial fishing by permitting it only among the riverside communities where inhabitants rely on fishing to maintain their traditional ways of life. With this exception, fishing for golden dorado on the Upper Paraná is now catch-and-release only. To further protect the dorado, fishing for them is not allowed during spawning season in November and December.

Eventually, I subdue the dorado that struck my black streamer long enough to snap a few photos. When I hold the gigantic fish, I can’t help but wonder if there’s a bit of truth to the myth about the origin of the dorado’s voracious appetite and stunning color. In the day’s last light, its scales gleam like Angaa’s gold coins.