Flyfishing for trout isn’t a complicated, difficult sport. A close look reveals that a successful flyfisherman has mastered several basic... 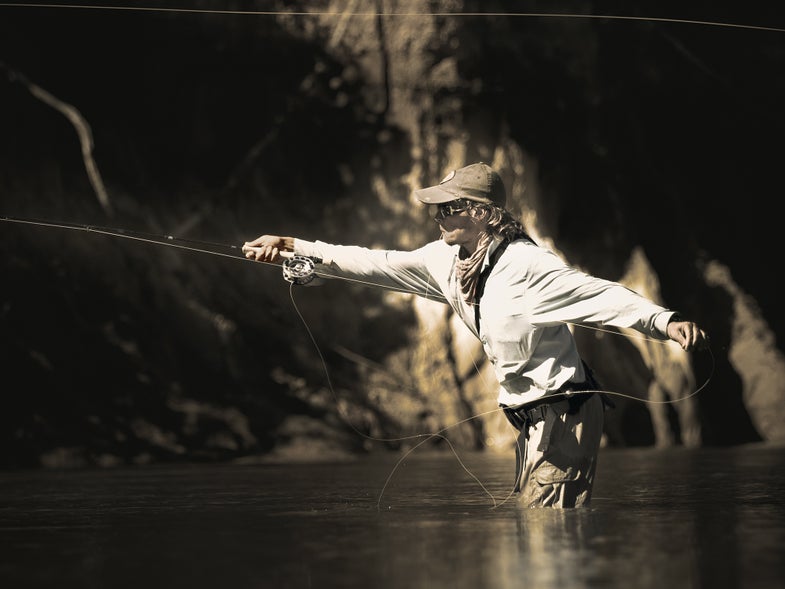 Flyfishing for trout isn’t a complicated, difficult sport. A close look reveals that a successful flyfisherman has mastered several basic abilities: casting smoothly and accurately, knowing how to select a fly that trout will eat on a given day, presenting a fly in a manner that is enticing to trout, and fighting and landing hooked fish. It’s all about problem solving, one step at a time. The following 10 pointers will help you execute those key elements of flyfishing, whether you’ve just gotten your first fly rod or you’re an experienced angler who wants to become even better.

It’s axiomatic that the fly line, and thus the fly, follows the rod tip. Taking that one step further, the rod tip follows the thumb, which is the strongest digit and the one most anglers place on top of the grip for power and direction. Lee Wulff used to cast with his index finger on top, because he felt it gave him better control. He was an exception to the rule. No matter. As long as you keep your thumb—or index finger—pointed at the target, your cast will go where you want it to. —C.M.

The No. 1 mistake novice fly casters make is going back too far on the back cast. The only tipoffs are the noises of line slapping the water or the rod tip scraping the ground behind them. This happens, more often than not, because the caster is allowing his wrist to cock too far back.

Remember this: The arm is the engine; the wrist is the steering wheel. Yes, sometimes it’s “all in the wrist,” but that pertains to matters of aiming the cast, not powering it. When you let your wrist power your cast, you will crash.

To correct this, get a large, thick rubber band, wrap it around your casting wrist, then insert the rod butt inside the band when you cast. If the band is flexing too much, odds are you are breaking your wrist too far.

If you are wearing a long-sleeved shirt, tuck the butt inside your cuff. It will have the same effect.—K.D.

Mending—the art of tossing a bend in your line as a hedge against drag—is essential for effective drifts. The trick is knowing when and how much. Anglers make two basic mistakes: mending too aggressively and not often enough.

A powerful, sweeping mend while nymphing has the negative effect of lifting the fly off the bottom, often during the sweet spot of the drift. Try to gauge how to mend the line with minimal movement of the fly. With a shorter line, this often can be achieved simply by lifting the rod tip to place the line in the desired position.

Several short mends that don’t disturb the fly are better than one big one. Generally, the best time to mend is just before you think you need it.—C.M.

You see a trout rising in a riffle with consistent, steady gulps. You wade into position, make your false cast, let fly, and—pow!—a gust of wind tosses that dry fly 2 feet to the left of what you thought would be the perfect shot, just outside the fish’s feeding lane. What do you do? If you’re like most people, you want to give it another shot. You quickly load up and try again. Bad call.

“Live with it,” says Missouri River guide Pete Cardinal. “If you make a bad cast, let your fly float out of that trout’s range of vision, then go again, but not before.” If you miss, there’s nothing wrong with letting the fly slide behind a trout before casting again. More important, there’s everything wrong with ripping a slightly off-target fly from the periphery of a feeding fish.—K.D.

Given the difficulty of choosing one fly to fish a trout river on a given day when there is no obvious hatch happening, I’d pick the Muddler Minnow. Why? Because the Muddler has multiple personalities, and it can be fished in different ways to cover a variety of situations.

Its primary role is that of a streamer. Pulled below the surface, it looks like a sculpin or other baitfish. If you grease the deer hair on a Muddler, however, and either dead-drift it on the surface or twitch it slightly under a cutbank, it looks like a grasshopper.

All flies can assume different characteristics if the angler understands how to adapt their presentations. Clip the wings and hackles on an Adams dry fly, for example, and you’ve just made an RS2 emerger.

The point is to adapt your flies to different situations. You don’t need 50 patterns for 50 scenarios. You are better off to carry 10 flies and know how to fish each, five different ways.—K.D.

6 | Use an Attractor Fly

One of the lessons I learned from scuba diving with trout came from watching them react to attractor flies (go to ­field​and​stream.com/scubatrout). To set the scene, I had a buddy fishing a two-fly dry-fly rig. The lead fly was a size 12 Stimulator—a big bug that might look like a terrestrial or a stonefly, although its basic mission is to stimulate a rise. The second fly, trailed 18 inches off the bend of the first, was a size 18 Bluewing Olive, meant to match natural Baetis flies.

As I watched the fish from below the surface, I noticed they’d swim up to check the larger fly, then catch view of the smaller fly and go eat it. The lesson is that if you are fishing two small dries, you won’t draw their attention as consistently as you would with an attractor.

The attractor fly really works when you are prospecting and when there isn’t a consistent hatch coming off. When you’re fishing a prolific hatch, don’t mess around with attractors.—K.D.

7 | When in Doubt, Think Small

Of everything to consider when selecting a fly, size is the most important, especially during a hatch. If you think you’ve identified whatever bug the trout are eating and they’re refusing it, go a hook size smaller. Pressured trout sense danger in big flies.—C.M.

The trick to landing big trout on a river isn’t complicated. Yes, you are going to run into situations where a fish makes a sudden charge, and it snaps you off. But when I’m guiding beginners, I tell them that all they need to be concerned with, after the hookup, is maintaining a steady arc in the fly rod, with the tip high. You need a strong, solid flex. If the fish wants to run, let him go, but keep the strong arc in the rod, and everything else will take care of itself.—K.D.

One morning, while dry-fly fishing a Trico hatch on Montana’s Missouri River, guide Pete Cardinal told me to stop casting and watch the water. We were working a seam where fast water, colliding with a slow pool, was creating a foamy bubble line. At times, that bubble line would disperse and spread out in wide fronds of white, wispy water. At other times, the currents converged and collected hatching insects in a tight, white highway that ran straight through the run. Until Pete pointed it out, I hadn’t noticed that the fish were keyed into this system. When the currents dispersed or collapsed, the fish didn’t rise. When the foam line formed a hard seam and collected those mayflies, the trout began slurping away at the surface. The lesson? Follow the bubble line. When you see a foam or bubble line on the surface, there’s a good chance that feeding trout will be underneath it.—K.D.

A number of years ago, I interviewed 10 trout fishing guides for an F&S story on their favorite tactics and techniques. Their input was diverse, and everyone seemed to have a different point of view (perfect for the story). But when I asked them all about their pet peeves, the answers were nearly uniform. “People don’t look where they walk.” “People forget to look at the water right in front of them.” “Most folks forget to notice that some of the best trout are right near the bank.” In other words, you’re standing on your fish, stupid.

Don’t take anything for granted. By dashing out into the middle of a run, the only thing you guarantee is that any fish that were there will be gone.—K.D.

Adapted from The Little Red Book of Fly Fishing, by Kirk Deeter and Charlie Meyers, by permission of Skyhorse Publishing Inc. Available everywhere books are sold.