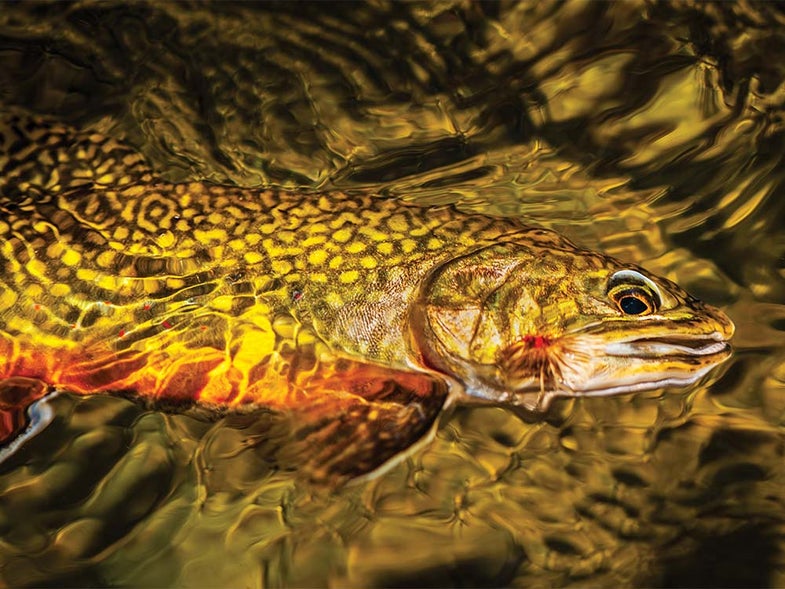 Small Wonder: The vivid colors of this wild brook trout make up for its lack of size.. Brian Grossenbacher
SHARE

Looking at the stretch of Michigan’s Jordan River I was wading, it was tough to believe it was teeming with wild brook trout. The shallow, ultraclear flow wasn’t very wide. It was fully lit by the August sun, and there wasn’t a dark hidey-hole in sight. Here and there, a few branches lay clumped together on the sandy bottom, creating meager eddies and slight depressions. I could see every leaf on the riverbed, but I hadn’t seen—or spooked—a single trout. So when my first cast of a beetle behind a midriver stick was met with the sip of a brookie that seemed to materialize out of the ether, I was shocked. Holding the tiny fish in my hand, marveling at its ruby spots and amber fins, I realized that a wild brookie’s ability to camouflage itself is uncanny, and that I don’t chase them nearly enough.

Downstream, my good friends Joe Demalderis and Brian Kozminski were enjoying the simplicity of the day too. We each carried a 3-weight outfit, a dozen dries, and a spool of 5X tippet. This was Kozminski’s turf, and while the Boyne City guide built his reputation on big browns, wild brook trout are his passion. Every few minutes, someone would hoot over a missed take or another beauty skating to hand. It was all very relaxing until noon.

Not Waiting on a Friend

“I’ve got to split,” Kozminski told us. “I’ve got something to do this afternoon, but you guys should keep fishing. Just keep working up until the river meets the road again.” We watched tall, thin, in-shape Kozminski bound off downstream, practically gliding over every logjam and sinkhole that had tripped up less-than-in-shape Demalderis and me in this swamp that was cut in half by the Jordan.

For the next hour or so, we picked away at brookies in every bubbly bend and pothole that looked juicy. We also noticed that reaching each next juicy spot was getting more taxing. The Jordan had necked down into a deep, fast-moving, wood-filled chute for as far upstream as we could see. It quickly became the kind of wade that required fresh calculation every 20 feet. I tried the high road over the now brush-choked bank, only to take five steps before my leading leg hit mud with no bottom. As I contemplated how I’d extract the extremity without losing a boot, I also came to the conclusion that we’d gone too far to turn around.

If you’ve never been on a fishing trip where the goal changes from catching to just getting the hell out of wherever you’ve gotten yourself, you don’t fish hard enough. By the time Demalderis and I made it through the quarter mile of deep, woody Jordan, that’s where our heads were. Except now we had to get around a monstrous beaver dam spanning the entire river. I started to scale the pile, limbs and branches cracking under my weight. At the pinnacle, it finally happened: The same leg I had arduously pulled from the mud plunged straight through. The pain from my crotch meeting hardwood was overridden only by a fear that at any moment, my foot would be gnawed from my dangling leg by a pack of angry beavers below. Luckily, they weren’t home.

The next span of the Jordan looked like cake—wide and sandy with no obstacles within eyeshot. But looks can be deceiving. For 10 steps it was like walking on concrete. On the 11th, you were buried up to your rear in quicksand. Demalderis spent 20 minutes trying to locate the soles that had been sucked off his fancy new quick-change-sole boots before giving up. We were exhausted and really had no idea how much farther we had to go. That’s when we made the decision to take to land and face whatever challenges the swamp presented until we hit the distant trees and the road.

After almost an hour of slogging through ankle-rolling, knee-twisting alder bog that made me fall flat twice, we finally reached the sloping line of trees and sweet solid ground. I don’t think we had ever been so happy to see a scrabbly dirt road. As we caught our breath before walking back to the car, Demalderis cracked a sly smile.

“I think that’s enough wild brook trout fishing for me for a while,” he said with a laugh.

Gear Tip: Do the Brookie Stomp

A Hippy Stone mimics a variety of insects, and brook trout love it. UMPQUA

A Hippy Stone mimics a variety of insects, and brook trout love it. UMPQUA

Wild brook trout will rise to almost any dry fly, but according to Michigan guide Brian Kozminski, no brookie assortment is complete without some Hippy Stompers. This mash-up dry has a profile that represents everything from a caddis to an emerger to a beetle, and thanks to its foam body, it’ll float all day. Kozminski says a Hippy Stomper in any hue will score wild brookies, but if he could pick only one body combo, it would be black and purple.