Flyfishing: Three Must-Know Worm Flies and How to Tie Them

Step-by-step videos on how to spin the San Juan Worm, the Jello Shot, and the Con-Dominator 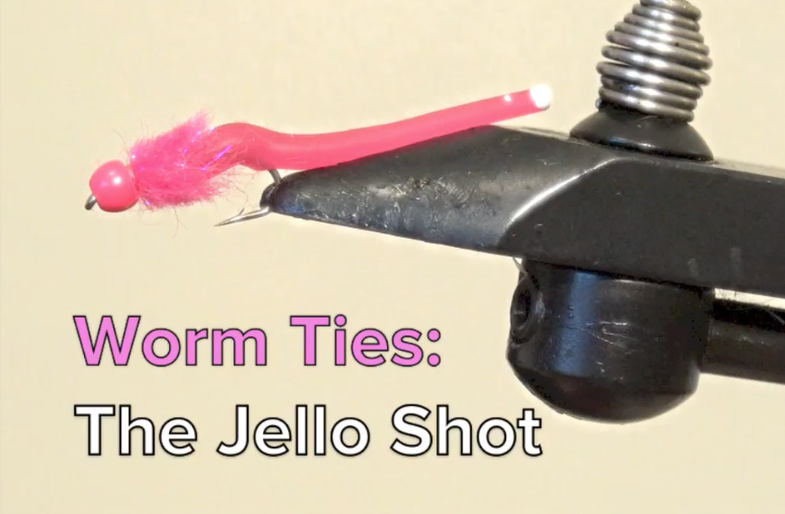 There are two constants in worm flies: One, there will always be the guy who scoffs at them or considers them cheating. He’ll say he wouldn’t dream of tying one on—at least not when anyone’s looking. This is because of the second constant: he, and every other fly angler, knows that worm patterns absolutely smoke trout. This is true year-round in any water, and for any size fish. In the spring, however, when the water is often high, cold, and stained, only a fool would wade in wormless. Whether you’re a rookie or veteran at the tying bench, here are three worm patterns—from the classic to the modern, and to the downright dirty—that you should spin up this season.

The truth of the matter is that you really need only one worm fly: the classic San Juan. Good luck finding a long rodder, from streamer junkies to dry-fly purists, who doesn’t have a San Juan or two in his or her box as a back-up. Because when all else fails, a 20-pound steelhead, a 12-inch stockie, and a 6-inch wild brook trout will all scarf down this simple worm. Best of all, even a kinda-sorta decent fly-tier can knock out this pattern in less than a minute. It is arguably one of the easiest bugs you’ll ever spin, making it great for beginners itching to score a fish on a homemade fly. San Juan styles are nearly endless, too; change the length, chenille thickness, and color to match your target’s appetite and size, or to match the water conditions. In low water, you can drift a worm weightless, letting it ride just below the surface. In high, dirty water, sink it with some split shot and dredge up a monster.

In recent years, clever fly-tiers have used some very non-traditional materials to create wiggly worms. Perhaps the most notable is the Mop Fly, which has a tail made from a single strand cut from a micro-fiber cleaning pad or wash mitt. This is just one example of solid worm material found in dollar stores and auto-part places, but it’s not the only one. I stumbled upon the Top Fin Anemone Plant at my local pet emporium recently. I’ve also seen these same perfectly tapered, fluorescent, wiggly rubber tentacles on some random dollar-store toys (though damned if I can find them on Google, because I don’t actually know what they’re called). I’m certainly not the first guy to recognize those tentacles as perfect worms, and the fly I call the “Jello Shot” is one of many variations of worm that you can make from this material. The basic idea, however, is that one little tentacle wiggles (like a bowl of Jell-O) in even the slightest current. Though I’ve yet to drop this bug in front of wild trout, stockers positively destroy it, as do grubbing carp—if you’re into that.

It’s staggering the number of jokes one can make about a worm fly made from a condom. I get it. But before you call gimmick on the Con-Dominator, hear me out: First, for years tiers have been using latex from rubbers to create nymph and worm patterns, so this is nothing new. Second, the reason condom latex works better than, say, rubber-glove latex is because it’s so thin. When you pull it tight and stretch it over a fly body, the thread or dubbing color underneath shows through. What you end up creating is a slightly opaque, shiny rubber skin around the fly that gives it an incredibly natural look and feel. Flies tied with condom latex look pretty darn good out of the water, but they really come to life when wet. My Con-Dominator is just one of many variations of worm fly that lean on this rather comical material. But you won’t be laughing when a 20-inch wild brown or massive steelie slurps down this pattern.