Taking trout on flies in the cold waters of early spring is like trying to get an overfed fat man... 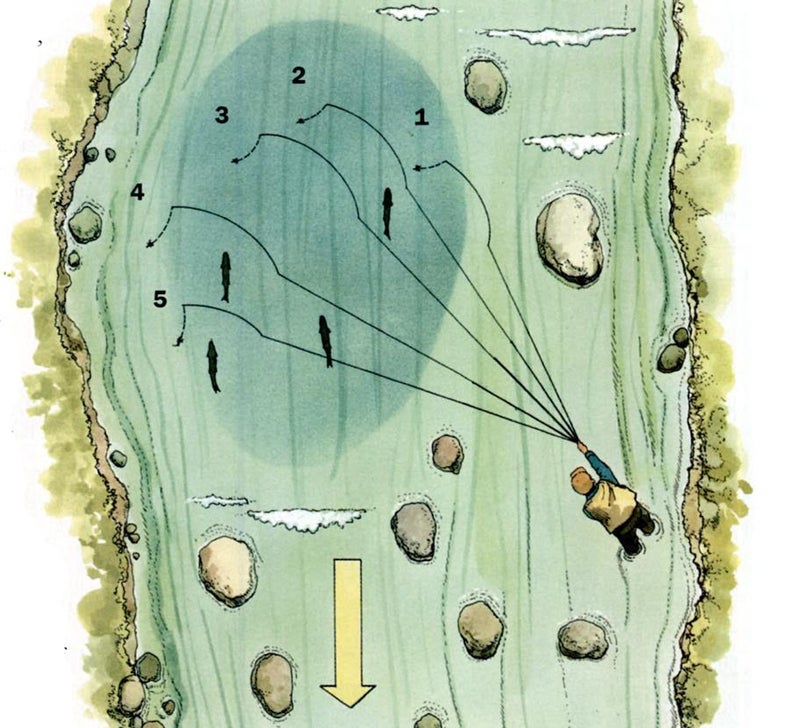 When fishing a wide pool, position yourself at an angle down- and across-stream. Your first cast should be close in, followed by successively farther casts until you have covered the pool.. John Dyess
SHARE

Taking trout on flies in the cold waters of early spring is like trying to get an overfed fat man to take yet another morsel. He doesn’t really want it, but if it’s tempting enough—and he doesn’t have to move far—he’ll gobble it down. If the fat guy is a trout, a streamer fly can get his attention.

In early-season streamer time, the water will be high and cold or low and cold, depending on the prevailing weather. The cold temperatures will keep trout on or near the bottom, moving little. But they’ll move if a sizable fly is delivered in a way that tempts them to take it. Your goal is reduced to just two things: Get your fly on or very near the bottom, and fish it slowly enough so trout don’t need to chase it.

Step 1: Up the Creek

Small waters, so cramped that you can’t position yourself to cast across their pools, must be approached from either upstream or downstream. Upstream is better. Most foothill and mountain creeks have well-defined stair-step pools; the majority of their trout, and almost always the largest trout, hang under current tongues at the heads of these pools.

Rig to fish small pools with a floating 4- or 5-weight line, a 3X leader the length of the rod, and a size 8, 10, or 12 weighted streamer. My favorite is a Lead-Eyed Woolly Bugger in olive or black. Whatever streamer you use must sink the instant it lands.

Take a position at the foot of a pool. If you’re after lots of fish and not concerned about size, fan your casts upstream from the lower end of the pool, covering the tailout, the edges, and the main current slot. Extend your final casts to place the fly right where the water enters the pool. Retrieve line a bit faster than the current escorts the fly.

If you’re after that one largest trout in the pool, calculate so the first cast will catch it. Make the cast straight up the current line, over the deepest water, directly to the head of the pool. Let the heavy fly sink. Retrieve downstream just fast enough to keep the fly out of trouble with the bottom. The streamer will nod and bob its way along, and that one big trout will be first to see the fly.

Step 2: Averaging It Out

Trout streams of average size, defined as being about a cast across, should be fished with a fast-sinking-tip line in 5- or 6-weight. Shorten the 3X leader to 6 or 7 feet. Choose a streamer that is more a swimming type than a bottom bouncer. A weighted size 6, 8, or 10 Mickey Finn, Muddler, or Black Marabou Muddler should work well.

In average-size water, you might discover yourself casting streamers over riffles, runs, and bend pools where currents create depths against the far bank. In such cases, take up your first position 10 to 20 feet downstream from the head of the water you want to fish. Refrain from wading until you’ve covered the water near you; it has just as much potential to hold trout as the water across the pool.

Cover all of the water with a fan of casts, starting in close and casting slightly upstream. Work subsequent casts both farther out and then slowly downstream. After each cast, give the line a few feet of free drift to sink the fly. Then take up the slack to bring your rod tip into closer contact with the fly. Make upstream mends to drop the fly deeper and slow its swing.

Most hits will happen at one of two times: first, when the fly swings out of slow water at the edges and inserts itself under the central current; second, when the fly swings back out of this central current slot and crosses the seam into the slow water alongside it. If you drop your rod tip, toss some slack, or make a mend at one of these two moments, the streamer will hesitate. This makes it look like something easy to eat.

Step 3: Bigger Can Be Better

If you fish a large river, one too big to cover any stretch of water from a single casting position, the largest trout of the year become possible. Choose a line that will take your streamer right to the bottom. Use a quick-descent line on a rod strong enough to propel it, meaning a 7- or 8-weight. Stub the 1X leader to 4 to 6 feet, and use heavily weighted size 2, 4, and 6 streamers in either swimming or bottom-bouncing styles.

Take a position at the upper end of the stretch you desire to fish. Make your initial casts short, either slightly upstream or downstream from straight across. You’ll have to search for the casting angle that delivers the fly to the bottom in the depth and current speed you’re fishing.

Give that fast-sinking line a few feet of drift to wrench the fly to the bottom. Then take up the slack to gain contact with the fly. Fish it on the swing, swimming and bouncing down there, slowly. Alternate a steady swing on one cast with a teasing motion of your rod tip on the next cast that repeatedly swims the fly a foot and rests it.

To cover a long length of productive water, move downstream a step or two after fishing out each cast. Some takes will be thuds; others no more than slow pressure against the rod tip. You need to sense these and rap the hook home. Then hold on. In big, early-season water, trout that take streamers can be fat guys of serious note.

WHEN TO FISH STREAMERS

We all know that in spring streams are supposed to be high and muddy, and we’re supposed to fish them with streamers on the bottom. That’s true—but only part of the time. Sometimes the water is low and clear, especially in the West before runoff begins. That’s still a streamer situation if the water is cold; no insects are out; and no trout rise, feed visibly in the middepths, or take nymphs with winks along the bottom.

If you see signs of other types of feeding, then respond to them no matter when it happens, no matter what the water conditions. Always fish dries, wets, or nymphs if they’re indicated. It’s the absence of indications for any other fly type that most clearly defines a streamer situation.