How to Fish Terrestrials in Late Summer

The best patterns and tips to help you land giant brown and rainbow trout on these big, crunchy bugs 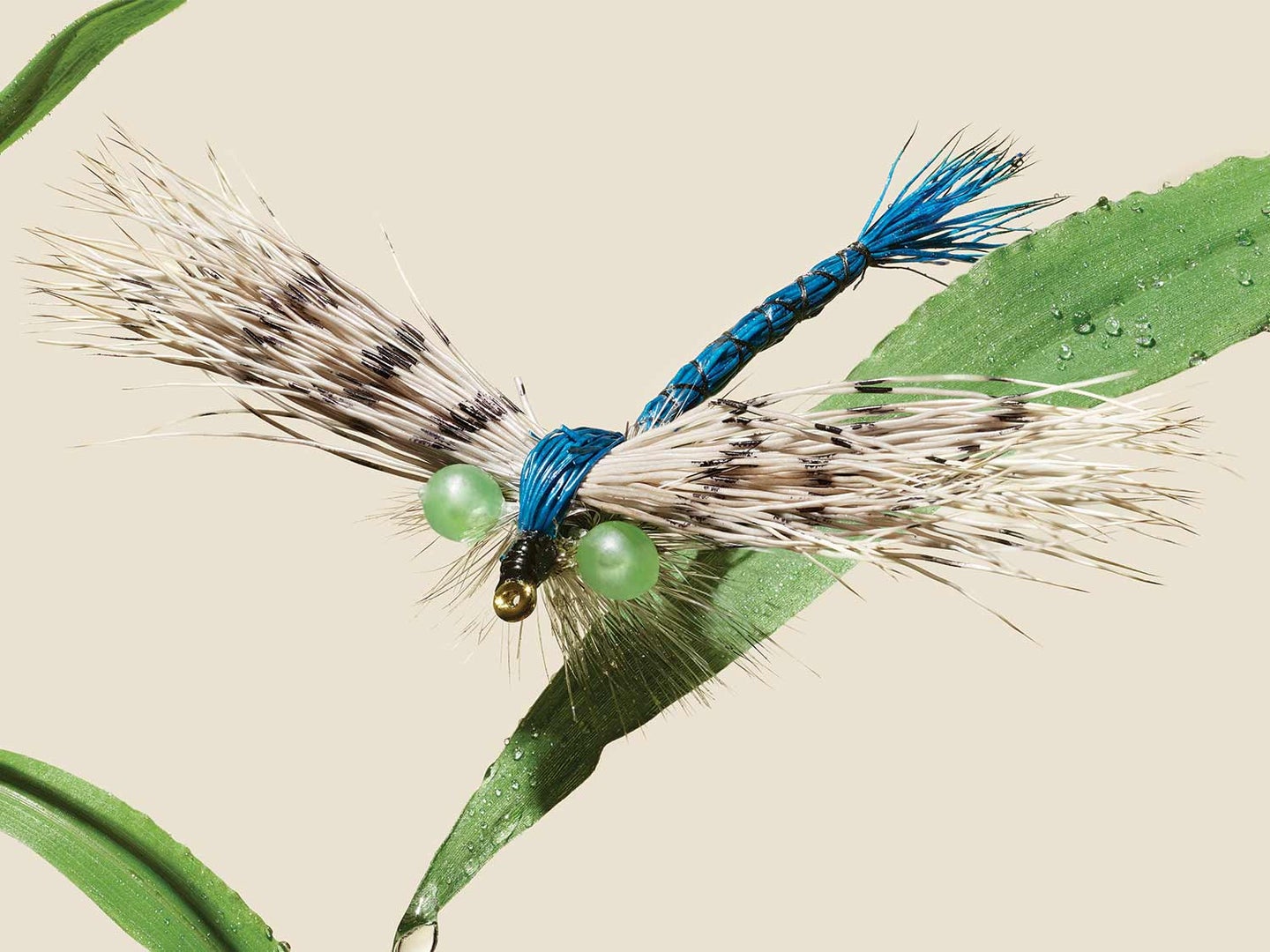 Grasshoppers, crickets, ants, beetles, bees, dragonflies, cicadas… There’s a whole mess bugs classified as terrestrials. No matter the insect, when a breeze blows any of these land-based trout snacks into the river, it doesn’t last long. In late summer, when traditional hatches slow, it’s ­terrestrials that keep the fish looking up. In fact, some of the biggest trout of the season often fall to a drifting terrestrial pattern. The bonus is that terrestrial fishing is laid-back. The best action coincides with wet-wading season. Or hop in the drift boat wearing flip-flops, relax with a cold beer, and just keep plopping that juicy hopper along undercut banks until a behemoth brown decides to jet out from its lair and smack it. But fishing terrestrials takes confidence because you often do a lot of casting before you finally get a taker. To get you on the fast track to success, we’ve rounded up some of the best trout guides in the country to find out which terrestrial they tie on first, and how they use it to call up late-summer slobs.

Southwest Montana is a mecca for terrestrial fishing thanks to the expansive cattle ranches and agricultural fields lining many of its blue-ribbon rivers. All that tall grass and brush is absolutely loaded with hoppers by late summer. Guide Paul Weamer fishes many Montana rivers, but he calls the Yellowstone home, and he knows that even though the grasshoppers are thick, your imitation will get snubbed if you’re not rigging properly.

“Tippet and leader selection are highly situ­ational, and that’s no different when fishing terrestrials. One of the deciding factors for me when selecting a tippet size is water flow,” Weamer says. “In the early season, when the Yellowstone is honking at 20,000 cubic feet per second, the flow is relatively uniform. However, when the water is low later in the season, there are more microcurrents that can hurt a natural presentation. Finer-diameter tippets act like a finer gauge spring. They’re more absorbent of the river’s currents and minute seams, allowing for greater ease in achieving a drag-free drift.”

Weamer prefers a long leader—9 feet or more—when fishing hoppers, though he notes that if you’re having a difficult time casting accurately, you shouldn’t be afraid to shorten up. “It’s crucial to put that fly where it needs to be,” he says. While it’s not uncommon for a trout to move far off a bank to eat a hopper, you’re always better off landing it as tight to the bank as possible. Visit any Western fly shop and you’ll find an enormous variety of hoppers in the bins. They all catch fish, but Weamer leans most heavily on the Stalcup’s Hopper. “This is a real confidence fly,” he says. “Foam hoppers are great and float like corks in heavy water, but Stalcup’s Hopper sits low in the film and has a low profile too. I believe the trout recognize it as easy pickings, minimal energy expended with guaranteed calories acquired, all without overexposing themselves too long to aerial predators.”

In most parts of the country, terrestrial fishing isn’t about matching a hatch. You’re simply mimicking a meaty bug that fell in the water, and you’re hoping an opportunistic trout takes a shot. Terrestrial fishing on the Delaware River in New York’s Catskill Mountains, however, presents an exception to the traditional blind-casting method because there’s a legitimate hatch to match, according to veteran guide Joe Demalderis.

“Flying ants are a summer affair that you can count on, and trout love ants,” Demalderis says. These bugs usually appear in late August. Clouds of them fill the air, and millions end up on the water, dotting the surface like coffee grounds. They’ll get the fish rising feverishly enough that you can pick specific targets like you would during any caddis or mayfly hatch. “It’s very similar to fishing a bluewing olive hatch,” Demalderis says. “You want a long leader, you need to make precise casts, and drag-free drifts are just as critical as ever given how selective the trout in this river tend to be.”

The bugs will vary in size, but Demalderis most often turns to a size 20 flying ant. Twelve- to 14-foot leaders are common, and sometimes it’s necessary to scale down to 7X tippet to score a take or achieve a perfect presentation. The tricky part is that the fish aren’t always eating single ants. With so much food on the water, trout often key on larger clusters of ants instead of loners, and mimicking a cluster is almost impossible.

“When the fish are eating clusters, it’s important to get that cast in their feeding lane with a short lead,” Demalderis says. “Don’t try to land too far ahead of the fish. You’re just trying to slip your fly in with the clusters. The idea is that your pattern just happens to be floating along with the group of naturals and gets eaten. This is why I always have a few flying ants with a little tuft of CDC. It helps you find your fly among the masses.”

Let That Sink In

The White River is a monster tailwater with a reputation for kicking out some of the biggest brown trout in the country. What the White is not known for, however, is hatches. The trophy trout here are meat eaters, more apt to grab a smaller trout than a mayfly most of the time. Although the aquatic bug life may not be strong enough to get the fish feeding up often, juicy terrestrials make these carnivores rise. This is why guide Jamie Rouse ties on a Psycho Ant during the late season. And don’t let the “ant” part of the name fool you; this is a hefty bug. “It’s not a hopper, which the fish see plenty of, but it’s larger than any ant we have around here,” Rouse says. “It’s just a good, nondescript, buggy terrestrial.”

Where Rouse puts that ant all depends on water conditions. In average to low summer flows, he focuses on choppy runs midriver, or deeper holes and pockets in the shallows. When the flows bump—especially if the water stains—Rouse switches his focus to the banks, where he says the fish will take shelter in calmer pockets.

“I’ll have clients cast from the boat directly across the river to the calm pockets. The fly sits still for a bit, but then the current takes the belly of their line downstream, ultimately drowning the fly and swinging it,” Rouse says. “When high flows consolidate fish into the calmer bank pockets, this technique can make for some epic terrestrial fishing.”

If Rouse’s drown-and-swing method isn’t getting trout to come up to take a swipe, he loses the ant and switches over to a hopper-dropper-style rig with a non-traditional twist. “I’ll add a 12-inch piece of 5X tippet to the bend of a really buoyant hopper pattern, but instead of a nymph, I’ll put a small ant or beetle on the dropper,” he says. “Then I’ll put a small tin split shot right above the trailing fly so it gets down quick. If the fish aren’t rising, this rig can be a game changer.”

The Pere Marquette is a text-book trout river. It’s loaded with gravel bars, pools, pocket water, undercut banks, and laydowns, all of which harmonize to make it a big brown factory. Come late summer, ebony jewelwing damsels are prolific on the PM. These insects are similar to dragonflies, but they’re smaller, topping out at just over 2 inches long. Through the years, guide Frank Willets has learned the importance of a natural terrestrial presentation and has devised a sneaky method of enhancing the ruse.

“I’ll tie a bare size 20 hook as a dropper off the bend of my dragonfly with 1-pound-test,” he says. “Then I’ll intentionally get the fly stuck on overhanging brush or other streamside vegetation where I think a trout would be looking up for falling food. I’ll let the fly dapple and splash on the surface as if it were falling or struggling. When a trout strikes, the weak tippet will break if the hook does not easily come free.”

During terrestrial season when flows are low and clear, Willets approaches the river more like a hunter than an angler. The key is to move slowly and deliberately. While the disturbance of a bug hitting the water will coax a big brown from its lair, the commotion of a careless wading angler will put it on high alert. Willets takes his time getting into position and waits like a stalking blue heron. When he’s confident the area has settled, he’ll rely on gentle roll casts or bow-and-arrow casts to present his bug. Most of the time, if that first presentation isn’t perfect, the game is over.

Willets’ final piece of advice is to skip setting an alarm and let yourself catch plenty of z’s. “The river­bottom is often the coldest spot in the morning,” he says. “Give the bugs living there some time to warm their legs and wings. If it’s a really warm morning or exceptionally dry, sure you’ll pick up some good fish. But more often than not, terrestrial fishing will be most productive after the sun gets up over the horizon a bit.”

The Green River is like Disneyland for trout anglers. It boasts more trout per square mile than any other Western tail­water. But despite the fact that it’s practically teeming with trout, don’t expect the fishing here to be easy, especially by the time terrestrial season rolls around. Angling pressure is heavy, and by late summer, with low, clear flows, the Green’s trout become some of the most discriminating in the world. That’s why guide Chad Jacques gets creative with ­presentations when cicadas make an appearance in the area.

“Elvira’s Cicada is definitely my go-to because it matches the profile of our cicadas perfectly. But no matter which terrestrial pattern you’re casting, if you go through a fishy run and you feel like you should have had a take, add a twitch to your fly,” he says. “Don’t go overboard with it, and don’t do it often, but the occasional, random little twitch to make it look like the bug is taking its last gasp of life can be the trigger that gets a trout to commit.”

In most traditional dry-fly situations, you want your fly to land gently on the water like it’s softly parachuting down from the air. That’s not the case with terrestrials. “I do the exact opposite of a dry-fly presentation,” Jacques says. “I cast with a little more velocity so that fly lands with a distinct plop.” Whether they get blown out of a tree or fall off a blade of streamside grass, terrestrials are clumsy in the water, and it’s the surface commotion they make that often gets a trout to lock in.

Jacques also stresses the importance of simply keeping your fly wet. Trout don’t eat during your false cast; lay the bug out and let it drift as long as possible. “Add an additional 30 feet to your drift,” Jacques says. “It’s not uncommon for a trout to follow your fly for a while before making the decision to eat.” If you’re getting refusals, Jacques recommends downsizing the bug before ­changing the pattern.