The 4 Types of Turkey Hunters You’ll Encounter This Spring

From callers to crawlers, the spring gobbler woods are full of characters. Here are some to be on the lookout for in the next couple months 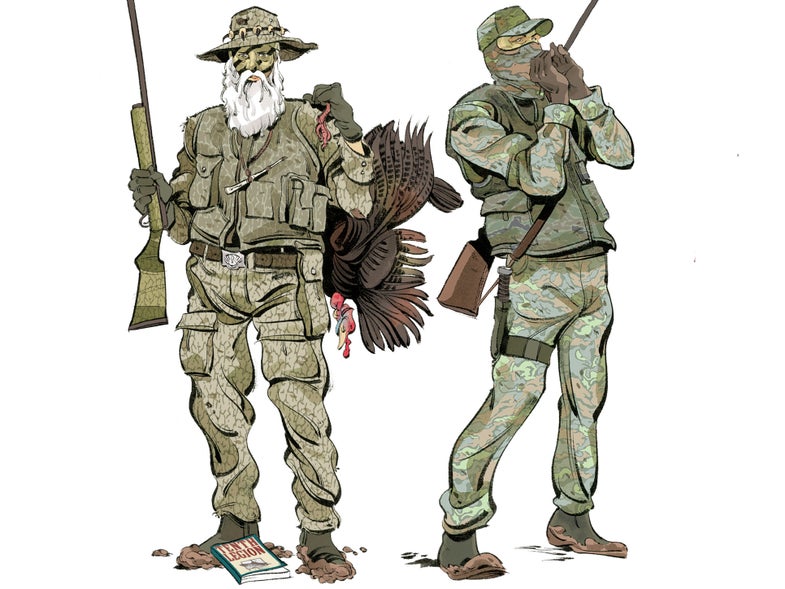 To see a spectacle of ineptitude, take a pair of proven turkey killers with different hunting styles and ask them to hit the woods together. Both will go home with unfilled tags, fully blaming the other for the day’s failure: ­Moron. I don’t see how he’s ever killed a turkey, carrying on like that.

Turkey hunting is split into cliques. Though there are many ways to kill a turkey, ardent adherents of particular hunting styles are all convinced that there is only one correct way: their way. When the true believers bump heads, power struggles form and stereotypes harden.

These characters all have one thing in common, though. They know how to fill tags on their terms. For open-minded hunters like you and me, there’s something to be learned from each of them.

He was around for the wild turkey restoration, and he’ll tell anyone who’ll listen all about it. Back in those days, he had to make every gobble count. That’s why he’s such a killer now.

The faded camouflage on his boonie hat matches the gray in his beard. He keeps a copy of Tenth Legion in his vest and can quote from it on command. He wears a hatband made of turkey spurs, and a wingbone yelper on a leather lanyard around his neck. Because the wingbone sounds like crap, he does all of his actual turkey calling with a two-sided paddle box. His A-5 has a fixed Full-choke barrel and is wrapped in Trebark tape.

The Sage is good at killing Eastern gobblers in the timber. He knows when to call and when to shut up, when to move and when to sit still. He believes that anyone who’d fan a turkey would also hammer-smash ducklings, and he can’t accept that his famously wary gamebird will ignore a 6-foot pop-up blind in the middle of a field. The Sage looks forward to each spring more than the last—and at the end of it, he usually has a few fresh spurs for his hatband.

Show this man a hardwood ridge, and he’ll show you a stage where he can put his contest-calling routine on display. Whether a turkey gobbles or not, the Performer will let loose with yelps, cutts, or fighting purrs. He arranges his instruments before him in the predawn like a surgeon preparing for a transplant. Pots and strikers and box calls will be laid out alongside chalk, grit stone, and sandpaper. mouth calls are likewise carefully organized: a ghost cut for tree yelps, and shipwrecks for raspy, suggestive talk. For emergencies, he brings along a custom-built scratch box. Throughout the morning, he’ll cycle from one call to the next until he finds the day’s magic sound.

Some turkey hunters (mostly those who can’t call) will say that the Performer is too noisy. He’ll reply that a gobbler that can’t hear you won’t come—especially if it’s hung up on the far side of a canyon or a four-lane highway. For the Performer, the calls and the calling are the very best part of spring. To bag a bird that isn’t searching for the source of the noise isn’t really bagging a bird at all.

The Go-Getter has never seen a longbeard that belly crawling couldn’t kill. His answer to any turkey hunting dilemma is to move closer. Always. Slither through 10 inches of ditch water. Sneak around the back side of a hill. Or just crouch and walk behind a fan or a gobbler decoy. Waiting, watching, and listening are not for him.

He’s most at home around fields, where he can see a turkey and move when it’s time. A henned-up strutter, the type that won’t come to traditional calling and decoying tactics, is in trouble.

The Go-Getter will spook some turkeys. Some hunters view his tactics as blasphemous and unsafe (he’s banned in Pennsylvania, where stalking turkeys is illegal). But neither alarm putts nor highbrows will slow him down because at the end of the season, he’ll probably kill more turkeys than everyone else on the list—and have at least as much fun scaring away the rest of them. Over the next hill or in the next county, there’s always another strutter with a ditch 40 yards away. The Go-Getter pours the creek water out of his boots and goes.

No turkey was ever spooked by someone sitting quietly and waiting, and so that’s how the Camper hunts. He finds a field that he likes and erects a blind. He doesn’t bring a decoy; he brings an entire artificial flock. Each individual fake is set precisely and for a purpose. Hell to the hunting buddy who faces the jake in the wrong direction.

The Camper will not move, even if there’s a turkey gobbling like a fool 500 yards away. In a few hours—or maybe tomorrow—that turkey could end up in the decoy spread. He is not deterred by hunger, thirst, or boredom because there’s a cooler in the corner of the blind and a full charge on his smartphone.

He’ll do some calling, but not much. On the rainy days and the windy days, when the turkeys aren’t talking and other hunters have gone home, the Camper’s best weapon is simply that he will be there, waiting for the tom that at some point is bound to make a mistake.

GEAR TIP: Keep It Close to the Chest

I think most turkey vests are too heavy and bulky. That’s why I leave mine at home in favor of a fanny pack much of the time. This spring, I may have found a better option—the Undertaker Chest Pack from H.S. Strut ($45). Secured via a four-point harness (like a binoc system), this pack has plenty of storage for calls, shells, and compact binoculars. It’s also a really handy place to rest the stock of your gun while you’re working a bird. I’m a bit uneasy about the magnetic closures. They are quiet, but time will tell how they hold up to hard use. —W.B.