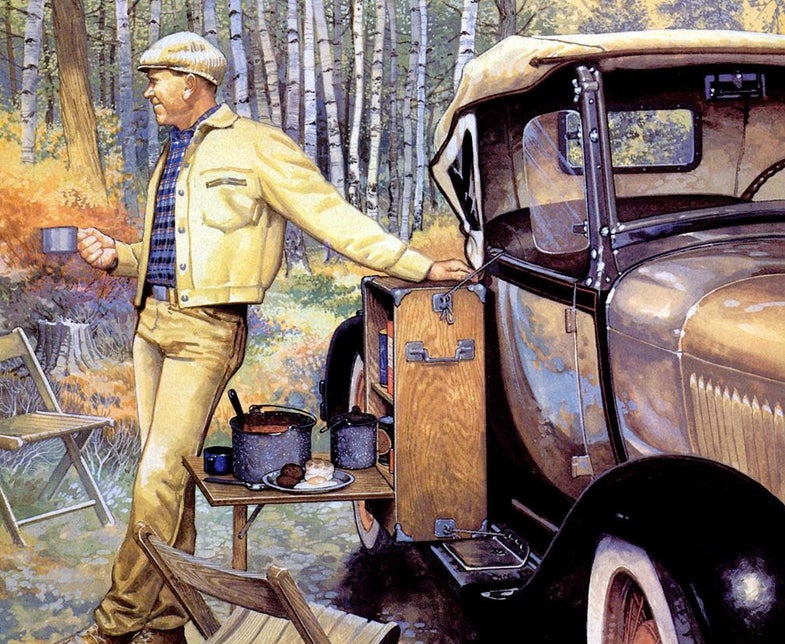 Editor’s Note: For the better part of three decades, Ted Trueblood wrote a monthly column for Field & Stream, captivating readers with stories of bluegills and bass, pronghorns and steelhead, chukars and grouse. Among all the stories he wrote for the magazine, however, one from the Jan. 1956 issue stands out for the peculiarity of its subject matter—boxes. “To my surprise,” Trueblood later recalled, “I got more letters about that article than any other I can remember.” We’ve provided the story below in its entirety.

One time when I was on my way to the coast for steelhead fishing, I stopped at a cafe in Bend, Oregon, for a sandwich and a cup of coffee. While I was eating I overheard a couple of cowpunchers talking. Apparently, it was a time for introspection, because one of them said, “My weakness is horses, women, and dogs.” His statement always intrigued me because of the order in which he worded it. I never could figure out whether horses or dogs were more important.

Like the cowpuncher, I also have several weaknesses. As far as horses go, I can take them or leave them alone. But I have others—boxes, for example. I am fond of boxes. Like all hunters and fishermen, I need things in which to put things, and boxes, in many cases, are the obvious answer.

I have been collecting and making boxes for as long as I can remember. There’s a stack of them in my garage. My wife occasionally looks at them and says I’ll never use them all, but a man never knows when he might need a box. I started saving shotgun-shell cases away back in the days when they were made out of nice, clean-grained wood with dovetailed corners, and I still have some.

Among the boxes which I use frequently—and which I think many other sportsmen might find useful—are pack boxes, boat boxes, grub boxes, camera boxes and, of course, tackle boxes. I even have a bottle box, but more of that later.

Now, it is a fact well known by all men who have suffered in a hot boat in the August sun or shivered in a December duck blind that nobody ever made a box exactly right, just as nobody has ever made a piece of string that was not 1 inch too short. That is why I started making and collecting my own in the first place. I always needed something a little different. I still do.

The evolution of my grub box is a good example. I started in the grub-box-building business by making one with shelves and drawers that sat on the running board of a car. The front was hinged at the bottom so that it swung out and was supported by a little leg to make a table. That was a handy box. You could stop beside the road almost anywhere, drop the front, and in a few minutes have a lunch ready. However, the car manufacturers put it out of business when they quit making running boards.

My next attempt was one that hung on the back bumper. I put a couple of iron hooks on the lower back side of the box so that I could set it on or off at will. There were handles on the sides, and the front, again, swung down to make a table. It had one drawer and several shelves and compartments, and it actually was pretty good except for one fault: it was too darned heavy.

When we made camp, I used to take this box off the back bumper and set it up inside the tent with the swingdown front at the proper height for a table. One time, after I completed this job, I wiped the sweat off my brow, looked at the box, and said to myself, “Never again.” I left it right where it was.

My present grub box, which we’ve been using for about 10 years, was an accident—I found it. I was in a stew to get started on a fishing trip when I happened to see a nice wooden box in the basement of the place where I worked. Nobody claimed it; so I fastened the lid with hinges and a hasp and put a handle on each end. I put a partition in the middle and attached a piece of lath to the lid with a hinge so that it would lie flat when the box was closed but support the lid when it was open.

That was a lucky evening: this box turned out to be exactly right. It is small enough so that I can handle it easily when it’s fully loaded, and it’s big enough to hold everything we need for a short trip. It measures 24x13xl2½ inches. I had two nesting stainless-steel pans made to fit one compartment; we use them for dishpan and wash pan. Our nesting cooking outfit—two kettles, stewpan, coffee pot, skillet, plates, and cups—fits inside the pans. There’s also room for the bag of silverware, dishcloths, towels, soap, and some food. We fill the other compartment with grub.

Since this box turned out to be so nearly perfect, I’m going to make another just like it when it finally falls to pieces. Judging from its battered appearance, that probably won’t be long.

Strangely enough, the only other box I have that turned out to be exactly right was also acquired more by luck than good judgment. It is my camera box. Since I spend a lot of time outdoors in all kinds of weather, I needed something that would keep my cameras dry and dust-free—and in our country it rains hard when it rains and the dust may be a foot deep when it doesn’t. Finally, just after the war, I stumbled across a stack of .50-caliber ammunition boxes in a surplus store. I bought a couple, took them home, and tested them. They were absolutely watertight, which meant they’d be dustproof, too, and were just the right size.

I glued a couple of Masonite partitions in one of them with duPont Household Cement. My 2¼x2¼ reflex camera in its leather case fits in one end. The 35mm miniature and the telephoto, also in their cases, fit in the other end. The middle division holds filters, an exposure meter, and enough film for a lot of pictures. By notching the two partitions I could even lay a compact tripod across them.

I gave this box a coat of aluminum paint so that it would not get so hot in the sun, and then tested it in the laundry sink. To my amazement and delight, I discovered that it was not only perfectly watertight, but would float fully loaded. This meant that I would be able to recover it in case it was ever spilled out of a boat-a distinct possibility on some of my trips.

I gave the other box a coat of aluminum paint and use it to carry flash equipment, bulbs, and extra film. Although it would not be such a loss if this stuff got wet, still it is comforting to know that it will be kept clean and dry, no matter what the weather. The final advantage of these boxes, slight though it may be, is that they are strong enough to sit on. Many times I’ve sat on them in a duck blind. With a boat cushion on top, one of them makes a pretty fair seat. I’ve mentioned my pack boxes in this column before. They’re 22½xl5xll inches, which is just about right either to manta (wrap with a packsaddle cover) for cargo packing or to drop into alforjas—packsaddle frames—if the packer uses sawbucks.

I made my boxes out of 14-inch plywood, with quarter round in the corners, and fastened them with cemented nails. They’d have been better if I’d used screws and glue, but I was in a hurry.

Judging from the way they’ve lasted, one of my ideas was probably pretty good. I wanted them light—hence the ¼-inch plywood—and I figured they’d probably take more abuse if I kept them flexible. Consequently, the lids are merely pieces of plywood attached with straps and tied shut with cord. I believe hinges and hasps, which would have made the tops rigid, would have been torn loose long ere this. For handles, I simply bored two holes near the top of each end and tied a piece of rope through them.

We load these boxes before we leave home, and when we get to the spot where we transfer from car or plane to packhorses, they are ready to go. At camp we empty them and stack them in the tent for a cupboard. Occasionally we use one of them as an extra grub box when we make a long camping trip by car or boat.

My boat box is mighty useful, too, although I intend to make another one, just a little different, if I can ever find the time. It came about in the first place because I wanted something in which to put shells, lunch, coffee pot or vacuum bottle, dry gloves and socks, and maybe a coat, when I was duck hunting. ’I use my canoe 98 percent of the time, and it didn’t help any of these items to slop around loose on the bottom all day.

We soon discovered that this box was equally useful in the boat when we were fishing. It kept lunch, jackets, tackle, and other small items together, out of the way and out of the weather. Consequently, we call it the boat box, although we also carry it in the car during bird season, again using it to hold shells. lunch, coffee bottle, and other items that are better off in it than on the floor.

This box is made out of ½-inch plywood, with brass corners to match the hasp, hinges, and handles. It is stronger than a young bull, but needlessly heavy. Also, I’ve decided, its 14-inch width is 2 inches more than necessary, although the 18-inch length and 15-inch depth are just right. I’m going to make the next boat box 2 inches narrower, with ½-inch plywood in the ends and ¼-inch stuff in the top, sides, and bottom.

One good feature of this box, which I’ll retain, is the flanged lid, made by putting the box together first and then sawing through it 2 inches down from the top. It is easier to attach hinges and hasp on the flat surface thus provided. And the rim around the top keeps things from sliding off when we swing it out for a table and the ground happens to be uneven. The lid, of course, has a hinged leg, made out of an old towel rack, to support it.

I have a lot of other boxes I’d like to tell you about, but the ones mentioned, with one exception, are the best. That exception is my bottle box. Jack DeMotte, who knows my weakness for boxes, gave it to me for Christmas. He bought a fifth of cough syrup and then built the box around it, using ⅜-inch plywood. The corners are so perfectly fitted and tightly glued that you can’t see the joints. He put a little nickel-plated carrying handle on the top, but didn’t provide any way to get at the contents.

In order to retrieve them, I had to saw the box in two. It was such a pretty little box that I hated to cut it; so I waited until one evening when I had a desperate cough. Consequently, my job of sawing and attaching the hinges and hasp, which were inside, was not so neat. Nevertheless, it is a nice box to have, and it has been, on occasion, a real comfort.