In the lower 48, muskies are the undisputed kings of the Esox family. Head far north of the border, and... 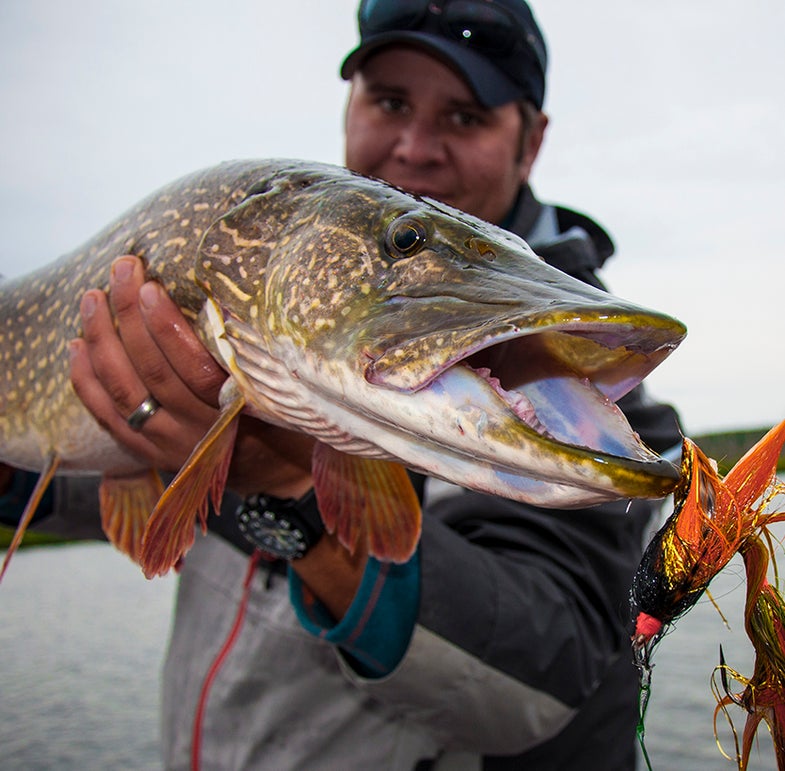 In the lower 48, muskies are the undisputed kings of the Esox family. Head far north of the border, and for the most part, nobody cares about them. Why? For starters they don’t exist in most of the hundreds of thousands of square miles of virgin waters near the Northwest Territories. Second, why worry about finicky muskies when the shot at more cooperative 50-inch pike is very real? Whereas many U.S. anglers view pike as bass lure-stealing nuisances, “Hook Shots” host Joe Cermele has had a jones for pike on the fly for years. Say what you will about this species, but the strikes are utterly explosive and often catch you off guard. When the opportunity arose to chase monster Saskatchewan northerns that had never seen a fly, Cermele and crew couldn’t board the float plane fast enough.

The Deal: The Cree River system near Stony Rapids, Saskatchewan, is an incredibly diverse fishery. There are seemingly endless miles of clear, rocky river where big pike can be found in every eddy and current break. Then off the main flow, there are seemingly endless deep, weedy bays chock full of northerns. It is a true pike fisher’s paradise, as many of the these fish have never seen a lure or fly, and exhibit maximum aggression unlike those in highly pressured lakes and rivers in the U.S. When your arms get tired of fighting pike—which average in the 30-plus-inch range and frequently break 40—and your fingers just can’t handle the burn of another strip strike, there are loads of grayling willing to sip dry flies and nymphs, and monstrous amounts of big walleyes that will hit…well…anything you can get in front of them.

When To Go: Most anglers—particularly fly guys–associated June with big pike. According to Cree River Lodge owner Pat Babcock, June is good, but August is best. June fish are spawned out, but by August the pike have recouped and fattened back up. Unlike closed systems that often get too hot for prime fishing in late summer, the amount of moving water in the Cree River system keeps water temps cool and the big pike feisty. As these fish have a long winter to deal with, they feed heavily in August when the short northern summer warmth starts to wane.

What To Bring: Lots of flies. Bring lots and lots of flies. Once you get to Cree River, you can’t run to the tackle shop for bugs, leaders, or a hook sharpener. Cermele and company brought easily 5 dozen pike flies a piece, destroying many each day on the water. If you don’t fly fish, large spoons in various colors (black and green was a favorite) not only turn fish, but can take the beating better than hard plastics. Wire leaders are a must, with 35-pound tie-able green wire the preference for the flies. If you’re one of those anglers that thinks heavy fluorocarbon is better than wire, you might be correct in a scenario where only a handful of fish are hooked throughout the day. At Cree River, you’d just be retying leaders every ten minutes, and these fish aren’t leader shy, so fluoro’s disappearing qualities won’t help you catch more fish. As for rods, bulk up; 8- through 10-weight outfits are best for chucking heavy flies, getting a solid stick on the strip set, and fighting these brutes. Floating line will work 95% of the time, but it’s wise to have some sink tips handy for deep holes. 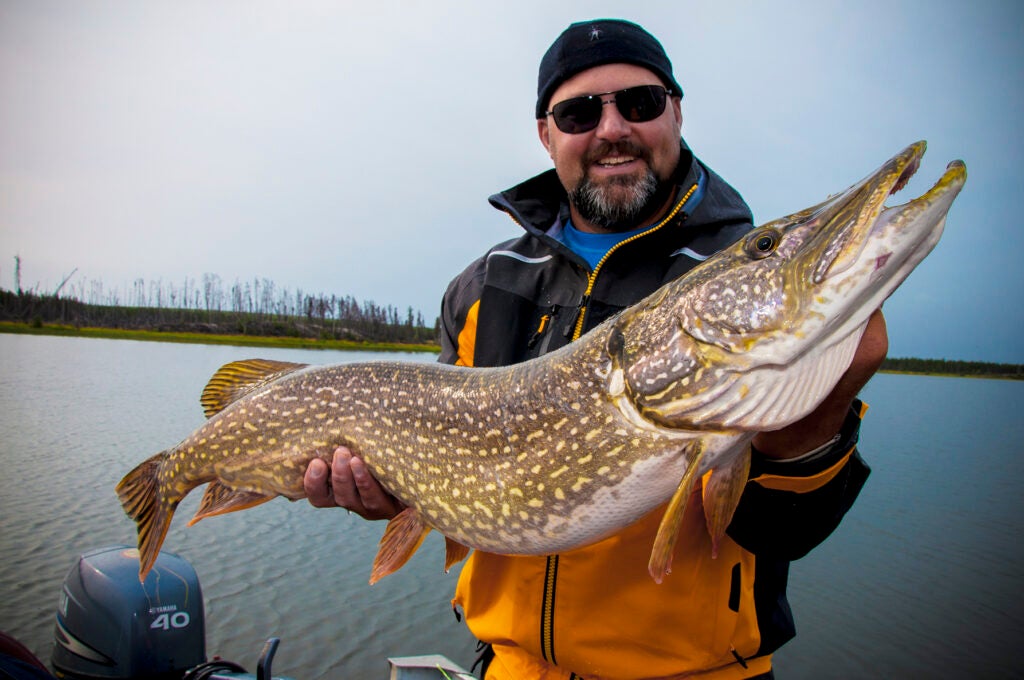 How To Fish: During our shoot, fly color and size didn’t matter nearly as much as presentation. Vary your retrieve speed until you get the bigger fish dialed in. Whereas smaller pike might strike at any speed, pulling bigger fish out of deep holes often required a little more finesse in the form of long pauses and quick, erratic jerks. Keeping your rod tip in the water on the strip is useful, as it not only helps you keep better contact with your fly for early strike detection if a fish hits and swim at you, it aids in strip setting, which can be critical depending on how hard or soft the fish takes the fly.

Where To Stay/Guides: There is only one place to stay—literally—if you’re going to fish Cree River, and that’s Pat Babcock’s Cree River Lodge. All of Pat’s guides know the 200-plus square miles of water the operation can fish like the backs of their hands. The food (including an exceptional shore lunch) is top shelf, and the cabins offer just the right amount of rustic comfort without being too plush in this remote setting. Pat’s crew can take you to farthest corners of the wilderness looking for those hidden trophies, or you can catch pike, grayling, and walleyes practically within eye shot of the lodge. At night you can catch a northern lights show off the dock while casting dry flies to rising whitefish. If you’re into pike on the fly, Cree River Lodge should be on the top of your bucket list. Cree River Lodge; (306) 276-7841