A mouth full of needle-like teeth. Incredible jaw pressure. The ability to spin on a dime and grab a leg.... 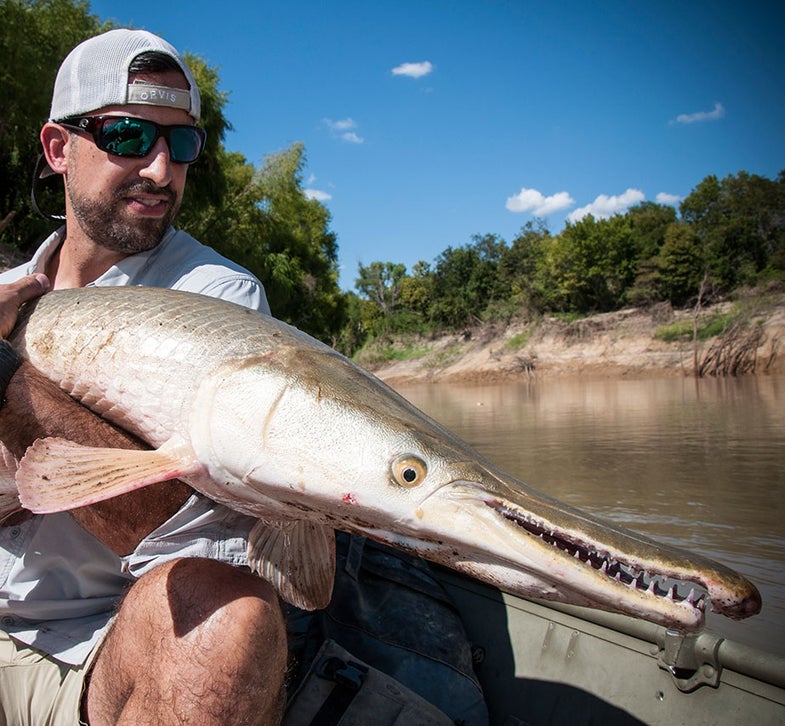 A mouth full of needle-like teeth. Incredible jaw pressure. The ability to spin on a dime and grab a leg. These are just some of the characteristics of the massive alligator gar that call Texas’s muddy Trinity River home. But despite the false wrap these dinosaur-like creatures get as trash fish that attack humans and decimate gamefish populations , they are on of the most intense species an angler can tussle with in freshwater. Last May, host Joe Cermele and crew took a shot at these brutes, but thanks to the severe spring flooding in Texas, they came up empty. This September, Cermele and artist friend Mike Sudal rejoined young-gun guide Dawson Hefner for a no-holes-barred round two of redemption.

The Deal: While alligator gar can be found in many states throughout the South, the Trinity River in Texas is arguably the most famous place in the country to chase them. It’s dirty, it’s loaded with snags, it’s a navagational nightmare, but it boasts an incredible number of fish in the top of their weight range; we’re talking 7 and 8 footers that can break the 200-pound mark. You can find the fish from the Trinity’s headwaters north of Dallas, all the way to where it meets the Gulf well over 400 river miles away just southeast of Houston.

When To Go: According to guide Dawson Hefner, it’s possible to get gar to bite year-round, although he skips out on the coldest months because the fish get too sluggish for the pursuit to be worthwhile. A visit any time from April through October will get lines tight, though Hefner says May and September are some of the best months. Mid-summer is great, too, but just be prepared to roast in the Texas heat.

What To Bring: Above all else, bring plenty of extra clothes. If you’re playing on the Trinity—even if you never get out of the boat—you can bank on being covered in a thin layer of sandy mud by the end of the day. If you get out and fish from the bank, you’ll be even more caked. The river’s banks are mucky and sticky, and once the wet mud dries, it just turns into mud dust. But battling it out with a 100-plus-pound gar is worth getting down and dirty. If you want to bring your own rod and reel, a conventional outfit that can handle muskies is good, but one that can handle big grouper is better. Hefner doesn’t mess around with his gear; his reels are spooled with 130-pound braid and his rods can stop a tank. Can you whip these fish on lighter gear? Sure. The trade-off, however, is losing many of them in snarls and snags because you can’t put on enough heat.

Where To Stay: Hefner lives just outside of Athens, TX, and the stretches of the Trinity he fishes most often are close to town. There are also plenty of restaurant options in Athens, and no shortage of chain hotels. Click here for a listing.