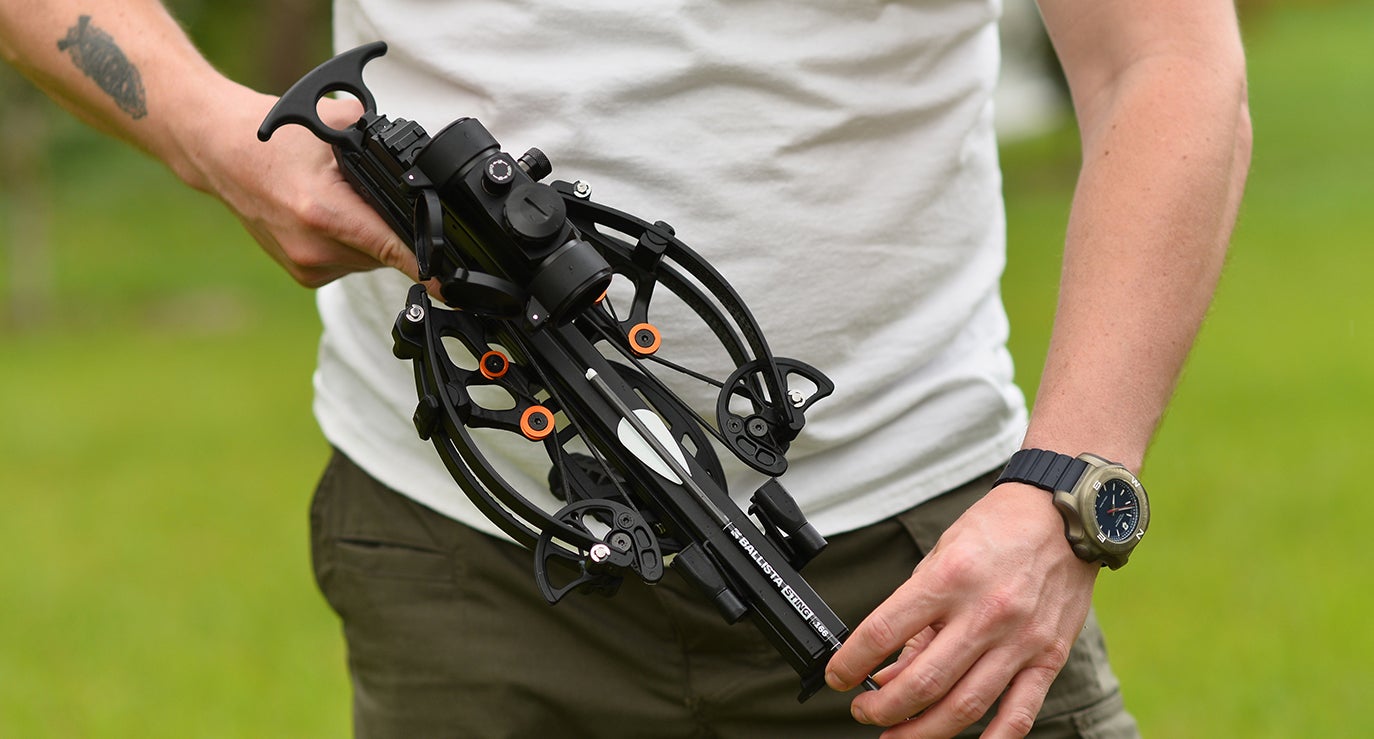 In George Clooney’s last good movie, he played a murderous bank robber who had been busted out of prison by his deviant brother (Quentin Tarantino). The duo took an innocent family hostage and overnighted at a strip bar, where, after Salma Hayek finished dancing with an albino python, a gun fight broke out and all the exotic dancers turned into vampires.

Stick with me, there’s a point here. Clooney and his hostages escaped to a hidden room in the back of the bar, where they found a cache of weapons large enough to fight off the vampire horde until sunrise—at which point some of them were saved by a drug cartel led by Cheech Marin.

In addition to condoms filled with Holy Water and a jackhammer tipped with a wooden stake, one of the weapons found in that back room was the Ballista Bat Reverse Draw crossbow pistol. Okay, that’s not true. But it would’ve been one of the weapons, had it been available back in 1996. And I’ll tell you what else: Back in 1996, when I had braces and a bowl haircut, I’d have saved every nickel I made mowing lawns to buy one for myself. I’d have used it to shoot possums and frogs (and kept it handy in case of vampires).

When I first saw the Ballista Bat Reverse Draw crossbow pistol sitting alongside the other submissions for Best New Product of the 2023 ATA Show, I thought, “The makers of this thing grew up in the ’90s and have a great sense of humor.” But then I handled it, and noted that it seems to be well-built with an advanced limb-and-cam system, and that with a 150-pound draw weight, it’ll shoot a reported 420 feet per second. That’s as fast or faster than most full-length crossbows. The cocking device looks cool, too, as it is integrated into the barrel and relies on a pulley system that keeps the force required to cock the bow to just 50 pounds and has a built-in self-retracting cord tensioner.

The bow also has standard picatinny rails for mounting optics and accessories (including a bowfishing reel) and a folding foregrip. It can be used with practice bolts or Ballista Sting bolts, which are 13-inch, 400-spine carbon shafts with threaded inserts for broadheads. Sixteen-inch bowfishing arrows are also available, in a 3-pack, for about $40 (far less than you’d pay for three standard bowfishing arrows).

There are actually two models of the Ballista Bat Reverse Draw: The standard Bat has forward-facing limbs and is a little less expensive, but is also 90 feet per second slower. Seems to me you’d want to spring for the Bat Reverse, which provides the benefit of a longer power stroke in a comparably sized package.

I’ve not had the chance to use either one, but I have requested a sample of the Bat Reverse to review. Do I think it’d be a practical hunting tool? Probably not (though as best as I can tell, it would be legal here in Kentucky or Texas, but not in Illinois or New York). With the bowfishing setup, I think it’d be a hell of a lot of fun for shooting carp, and wouldn’t take up much room in the boat. It’d probably do OK for possums and frogs, too. Maybe I need to mow $450 worth of lawns this summer.