The Best Camp Knives Ever Made

When it comes to camp chores, a bigger knife is usually better. Here are some of the very best 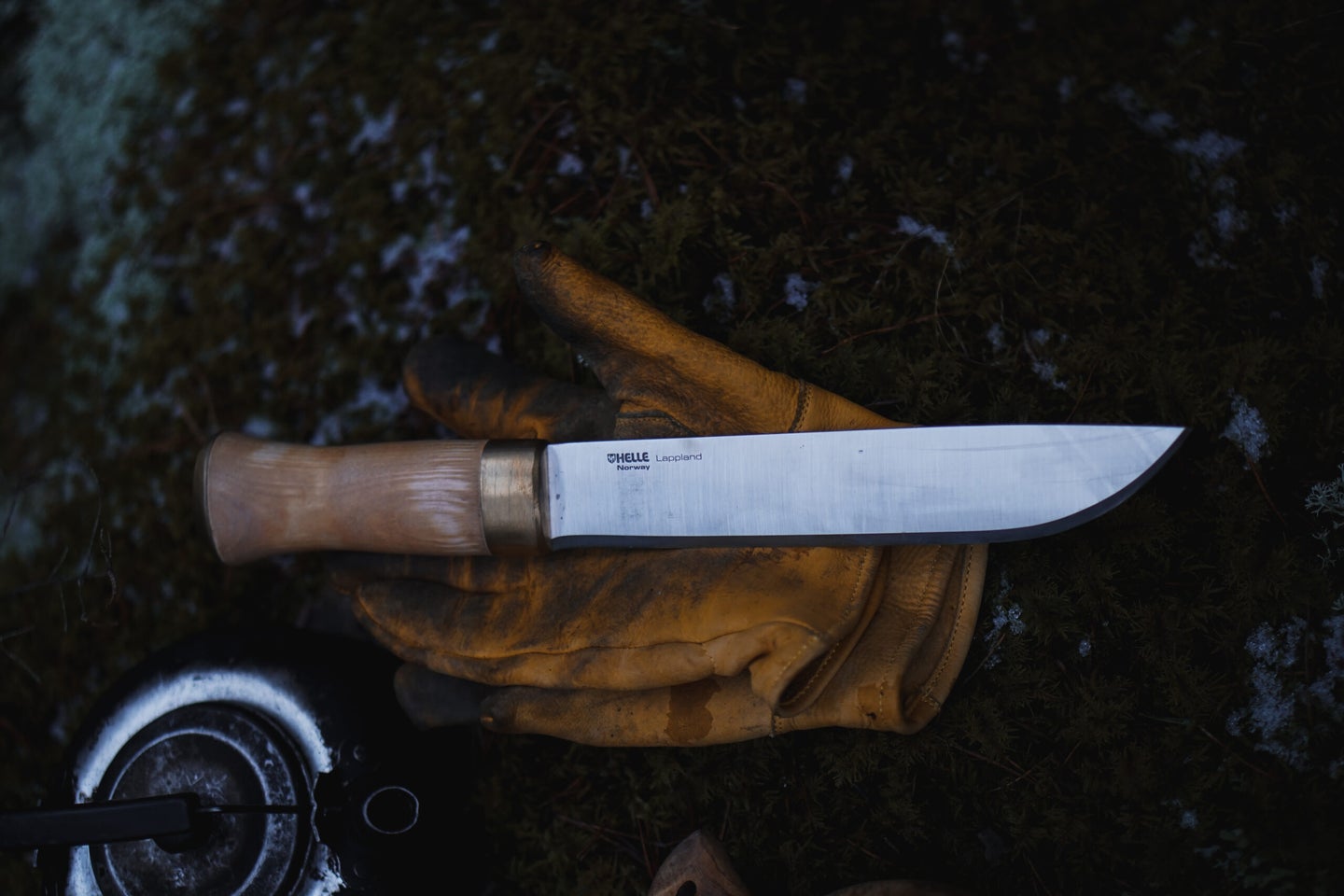 As a kid, one of the first lessons I learned in the outdoors was that knife size was directly related to experience and competence. The smaller the knife you carried, my elders preached, the more likely you knew what you were doing, and the bigger the knife, the more likely you were a tenderfoot, and therefore subject to scorn, mockery, and derision.

But my elders were full of it. I’ve found this out, and so have a lot of other people. Thus, the re-discovery of the camp knife, which is at least an old idea, and probably an ancient one.

In the U.S., mountain men carried heavy butcher knives that today would be called camp knives. In World War II, the Marine Corps issued a massive-bladed knife with a rounded point that it called a Hospital Corpsman’s Knife. It was a brutish thing that could do everything from breaking rocks to amputating limbs that were beyond saving. It, too, is a camp knife. In Lapland, Kenya, and in the Philippines, people have used camp knives for centuries and call them, respectively, leuku, panga, and bolo.

The virtue of this tool was best summed up by ace Maine knifesmith Lamont Coombs, Jr.: “You can do little things with a big knife, but you can’t do big things with a little knife.”

Here are four of the best big knives ever made. You won’t use them all the time, but when you do, you’ll find they speak with a mighty voice.

Dan Winkler established himself in the late 1980s as one of our foremost makers of buckskinner knives, turning out blades and sheaths that were individual works of art. In 1998 he switched gears and designed a standardized line of tactical knives and tomahawks that have found  favor with some extremely frightening people who wear uniforms.

The Winkler Camp Knife is not only the best knife I know of in that category; it’s one of the very few perfect knives I know of in any category. Its 9¾-inch drop-point blade is made of 80CRV2 carbon steel, which is given a black Caswell finish. This is a high-carbon tool steel that is hard, tough (not the same thing), and holds its edge for a long time. It will rust, however, thus the Caswell finish. Winkler tempers his blades to Rc 60, which is harder than the usual camp knife figure of Rc 55-58.

Handles are ergonomically superb and come in either maple or micarta. Dan’s sheaths, which are as good as his knives, are felt-lined Kydex. Dan’s shop can build you one to order (winklerknives.com) and arizonacustomknives.com and knifeart.com get them once in a while. Then they are bought with blinding speed.

Designed by Ethan Becker and produced by Ka-Bar, this is one of a series of knives that have become cult favorites and probably get customized more than ’55 Chevys. Known to the cognoscenti as the BK-9, this model has a 9-inch clip-point blade made of 1095 Cro-Van steel and coated with epoxy. You can get a scary edge on it with very little effort.

The handle scales are removable and are made of something called Ultramid. The issue handle is OK, but if you’d really like to do things right, Google theknifeconnection.com and look at their replacement handles scales. They are made of G-10, and are therefore indestructible, have a slimmer profile than the factory grips, look much nicer, and identify you as a Knifer in the Know, even if you’re not. They’re $60, and worth it.

The sheath is so-so. If you’re looking for something better, Google “Becker BK-9 custom sheaths,” and prepare to be thrilled. The really good ones cost north of $100, but so what? Can you take money to the grave with you?

Midwayusa.com and amazon.com has BK9s right now for just under $120, which is a very good price.

Pronounced “Hoonglass,” with the accent on the first syllable. The Junglas is highly similar to the Winkler Knife in size, shape, and feel. Its 10¼-inch drop-point blade is made of powder-coated 1095 steel. The handles are micarta and can be ordered in all sorts of colors. The knife comes in a black Kydex sheath that is excellent, and although there are custom sheaths available, I don’t think you need one.

There is much to love here. ESSEE has a maniacally thorough field-testing program for every knife model before it goes on the market, and it shows.

The handle is not only big enough for any paw, even a gloved paw, but is also ergonomically excellent. The coating is extremely tough. Edge holding is superior. The weight, heft, and balance are decisive. When you hack something with the Junglas, it stays hacked. Get a baton and you can probably split a telephone pole and then, without resharpening, whittle kindling shavings. The MSRP for the Junglas is over $300. Amazon carries it about $185, and there are other sources as well. ESSEE has an excellent reputation, and if I could not afford the Winkler, I would get one of these and live out my life in harmony with the universe.

This type of knife is known as a leuku, which is Finnish for “big knife,” and is a universally-used tool of the Saami people, who inhabit the northernmost reaches of Europe. It has flourished, unchanged, for a millennium, which means it works pretty well.  Helle is a Norwegian company, and the Lappland is unique among the four camp knives described here because its blade is made of stainless steel, Sandvik12C27. Said blade is 8½ inches long, which is about the minimum length for a successful camp knife.

The handle is birch and the handle furniture is brass. The Lappland comes in a traditional pukko sheath, which swallows the knife almost completely. It’s damn near lossproof, and eliminates the need for snaps and straps, which are a pain in the ass when your fingers are frozen. The Lappland’s handle is shaped in the classic pukko style, which is designed for use with mittened hands; if cold weather figures prominently in your plans, this is worth considering.

The price for the Lappland is around $170. They’re pretty easy to find, including on Amazon.com. For a look at other leukus, forged by individual smiths, go to Ragweedforge.com. Some of them are very pretty, and most of them are amazingly cheap.

How Long Is Long Enough for a Camp Knife?

There is no shortage of “camp” knives with 6- and 7-inch blades. These, I say, are nothing more than hunting knives with pituitary problems. A true camp knife needs at least 8½ inches of blade; 9 is much better and 10 is better yet. To illustrate this, I ran a two-knife chopping test on a dead, sound, birch tree that was 6 inches in circumference. One knife was the Becker BK-7 Combat Utility with a 7-inch blade, the other a Becker BK-9 Combat Bowie with a 9-incher. Same steel, same temper, same hardness, same everything except length and balance.

The BK-9 severed the tree in 53 strokes and took 80 seconds.

Granted that my whacking and hacking were not of the highest order (long layoff), the longer blade still did the job with a lot less work, and avoiding work should be our foremost objective in all things.

On Keeping and Sharpening Camp Knives

The test mentioned above was a reminder that a knife with a blacked-out blade and camo handle scales is pretty easy to lose. The solution is to use a paracord lanyard in a nauseating but highly visible color. Or you can tie a fancy lanyard using the snake knot (see YouTube for directions) or buy one. They don’t cost much, and it beats losing your knife.

Sharpening a large knife presents its own challenge. You do much of the work with the curve of the blade, but because of the blade length, you lose your leverage when you’re sharpening this segment. The solution is to wrap the blade at the halfway point with a couple of turns of an old T-shirt. Grab the T-shirt to sharpen the front 2 or 3 inches out to the tip. It gives you back your leverage and control. Be careful doing this; seizing a bare edge that is on its way to being very sharp is not good for you.