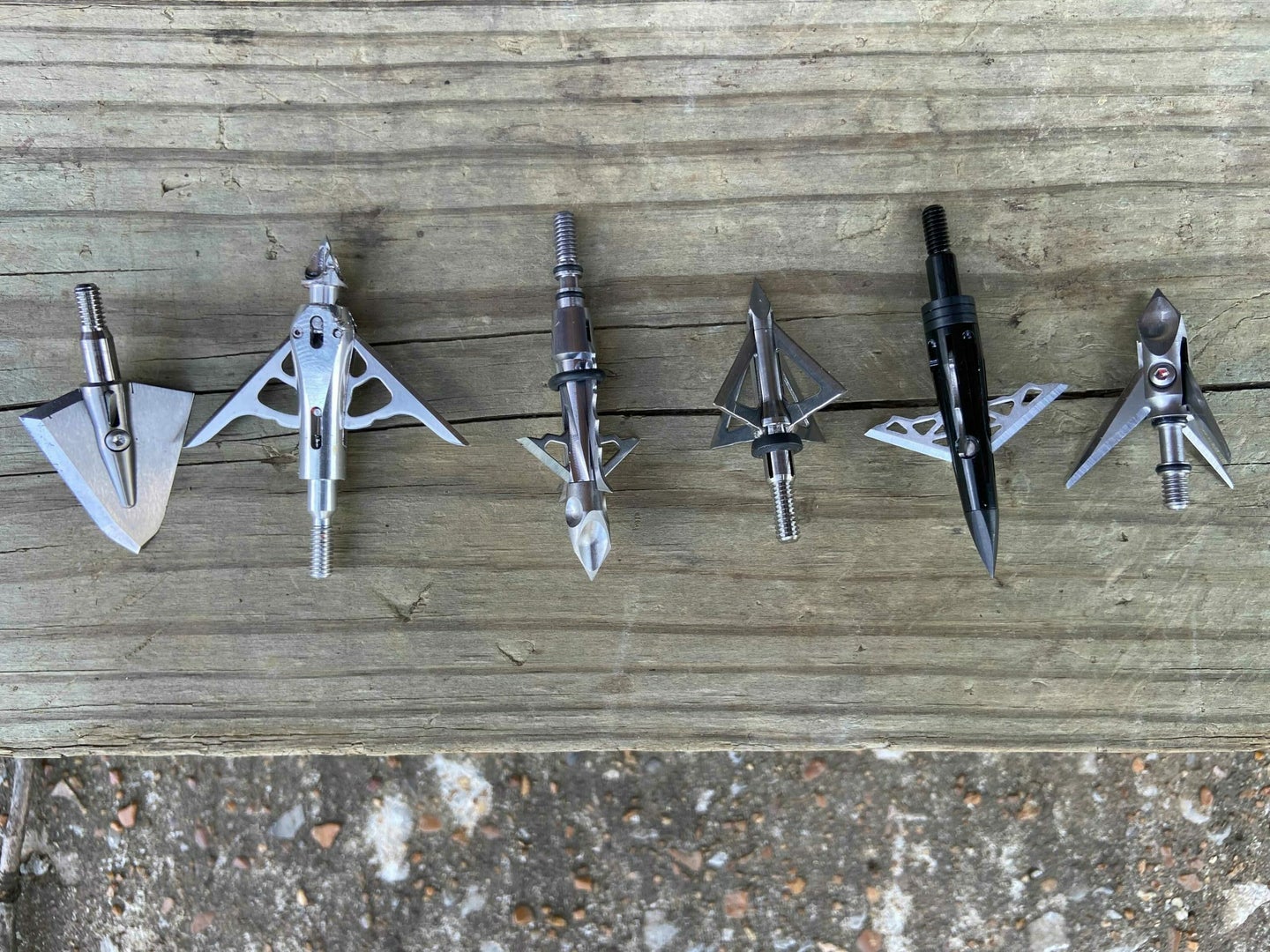 The Best Crossbow Broadheads of 2021

We put this year's best crossbow broadheads—mechanical and fixed—to the test. Here are the results

The only true requirements for the best crossbow broadhead is that it penetrates deep enough to hit a vital organ and cleanly cuts tissue along the way. A couple years ago, my buddy Tyler Freel killed an Alaska grizzly bear with a knapped flint arrowhead and recurve bow. Put another way, a sharp rock will work if it hits the right spot, but even the toughest fixed-blade broadheads and the largest-cut mechanical broadheads won’t make up for a marginal hit.

But still, shot placement being equal, good broadheads are a huge advantage. They can mean the difference between a profuse blood trail and a trickle; a broken shoulder or an arrow stopped cold. That’s why I spent a couple scorching summer days on the range testing new broadheads, to help you decide what to use ahead of this hunting season. I trashed a whole lot of perfectly good blades and arrows in the process, as well.

We’re publishing the results of this test in two parts, starting with crossbow broadheads below. Keep in mind that nearly all of the best new broadheads I tested in 2020 are still available in 2022, so if you haven’t read that, check it out.

How We Tested the Best Crossbow Broadheads

Long-time bow-test panel member Danny Hinton helped with the legwork of this test. Our broadhead test is an invitational. Last year we tested 20 broadheads, but this year’s field had just 13 total heads and 6 crossbow models, largely due to the post-Covid manufacturing challenges that seem to be plaguing most industies. This included three mechanical broadheads and three fixed broadheads.

Once we received a submission, we weighed each head from a package individually to gauge consistency. We did a quick blade sharpness evaluation by first checking the edges with our thumbs, and then stretching 2-inch rubber bands to 3 inches, between a thumb and index finger, screwing the broadhead into an arrow, touching it against the taught rubber band, and seeing how much effort was required to sever it. Most blades required a little pressure to pop the rubber band, which is acceptable. A couple mostly rolled the band around, and those are too dull. A few popped it almost upon contact, and that’s ideal.

Next, we tested the broadheads for accuracy on the range with a TenPoint Vapor RS470 crossbow and factory bolts, from a D.O.A. shooting bench at 45 yards. Then we moved on to the fun stuff. My buddy Charlie—who processes deer during hunting season and cattle and pork in the off-season at Hart Farms—donated a dozen sides of cattle ribs to the cause. I suspended those rib cages from a rope in front of a Block target. Then I shot them from 20 yards using a new AX405 crossbow. The AX405 shoots micro-diameter bolts at a speedy 400 fps, which was great for pushing broadheads to their limits. During this portion of the test, I evaluated the broadheads for penetration and durability. For mechanical models, I noted both entry and exit holes on the cattle ribs, to see if the blades opened on impact and whether they were still open and intact when they hit the Block target behind the ribs. That’s noted in the “Reliability” column in the tables below, which applies only to mechanicals.

Ramcat broadheads submitted three models—all in the Crossbow category—for the test, and the Ramcat Diamondback Hybrid was my favorite. I’ve had outstanding results on game with hybrid broadheads that blend a fixed blade with a pair of big swing-open mechanical blades. This one has an interesting, spiral-fluted ferule with a concave chisel tip. These heads shot outstanding groups that were dead-on with my field points at 45 yards. Averaging 100.1 grains, the Diamondback Hybrids were consistent from the package, too. The blades use old-school O-ring retainers that worked just fine, and they punched huge holes through the cattle ribs. Their one drawback? At crossbow speeds, these broadheads are one and done. Every single blade on all of the heads was bent or broken after going through the cattle ribs, and that damage seemed to impede their penetration a bit into the Block target, since they were stuck just inside the foam. While the mechanical blades on my samples were acceptably sharp, the fixed blades seemed dull.

The XS125 was the best fixed-blade broadhead the crossbow category. It was the sharpest and the most accurate. Each one weighed exactly 125.2 grains, and I shot near one-hole groups with them at 40 yards, and they were right in line with my field point zero. Paired with micro-diameter bolts out of the AX405 crossbow, these things penetrated like nothing I’ve ever seen. One bolt zipped through the cattle ribs and the entirety of the Block target behind it. I plucked the bolt out, as it was hanging by the nock. And each of the broadheads was like-new and still sharp, even after the rib test. The relatively small cutting 1-1/16 diameter, even with the two bleeder blades attached, would be my only criticism, but I think the tradeoff is worth it. They do have a lifetime warranty, and Iron Will broadheads are known for their durability, but that’s only useful if you don’t lose them. I don’t recover too many crossbow bolts after running them through critters, especially from ground level, so price is a point to consider.

The crossbow DK4s from NAP broadheads shot well and consistently weighed in within a half-grain of 125. They were acceptably—but not scary—sharp, and they punched big holes upon impact (their pivoting-blade cutting diameter is 1-3/8 inches). Problem was, the blades on these broadheads all but shattered in the cattle ribs at crossbow velocities. Every single one of the swing-open bleeder blades broke, and on two broadheads, they broke before making exit holes in the ribs (the broadhead ferules and pivoting blades did pass through, though some of the pivoting blades were damaged as well). Consequently, this crossbow broadhead scored low marks in both the durability and reliability categories.

Ramcat broadheads are best known for their “fixed” pivoting-blade broadheads, like the original HydroShock. Those heads, with the concave airfoil tip and blades that are sharpened on both sides, have a loyal following. The new Ramcat Hyrdoshock version of this head was the sharpest of the three Ramcat entries, and the most durable, too. The broadheads punched right through the ribs and deep into the Block, and while a couple blades were bent in the process, nothing broke. The broadheads did run 1 to 2 grains heavy out of the package, and they hit about 2 inches off from my field point zero.

The compound version of this two-blade mechanical performed pretty well in last year’s test, and the design makes for a good crossbow head, too. These Ramcat broadheads came from the package a little light—98 grains on average—and the blades were too dull for my liking. I had to saw at the rubber band pretty good to break it. Still, they did perform well. They hit about an inch off from my field points at 45 yards, and the plunger-style blade retention system—though a bit of a pain to put into place—seemed to do its job at both retaining blades in flight and springing them open on contact. They zipped through the rib cages, too, leaving big 2-inch holes on both sides. For mechanicals, these broadheads are durable. There was some blade bending after going through the ribs, but nothing broke, and the heads buried deep into the Block target.

There’s a lot of cutting surface in this big TruGlo 4-blade fixed broadhead, and it punched a predictably big hole in the cattle ribs. The titanium ferule is tough and well-designed, but the blades on a couple of the heads were severely mangled after the rib test. They were sharp enough, but they ran 2 to 2.5 grains light out of the package. The biggest problem with these fixed-blade broadheads is the same one that I’ve had with virtually every other fixed 4-blade model at crossbow speeds: They just don’t seem to fly well. These hit several inches off target from my field point zero, and group sizes were the largest of the test at over 3 inches.

Q: What is the most accurate broadhead?

Mechanical broadheads tend to fly like a field point, which generally makes them pretty accurate. In this test, mechanicals performed very well, scoring at least four out of five for accuracy. They were also very consistent, and consistency contributes to accuracy. But every crossbow has unique characteristics, so try a variety of broadheads until you find the set up that works for you.

Shot placement is more important than the type of broadhead used. But all things being equal, a high-quality broadhead with a big cutting diameter makes a huge difference. Many hunters show a preference for mechanicals because they tend to be accurate, but the cut on contact design of fixed blades is reliably deadly. Whichever you choose, make sure you can put it where it needs to go.

Q: How reliable are mechanical broadheads?

When they were first introduced, there were issues with mechanical broadheads. They would often fail to open, and not perform as needed when it counted. But those days are gone, and the bulk of the mechanicals on the market perform reliably. Two of the three in our test performed flawlessly, and the other scored a three out of five.

The field in this year’s crossbow broadhead test was more limited than it has been in the past, but it still produced clear results. The Ramcat Diamondback Hybrid is the best new mechanical crossbow broadhead due to its excellent accuracy and consistent results. Fixed-blade fans should consider the Iron Will XS125, which was the sharpest and most accurate of the test.