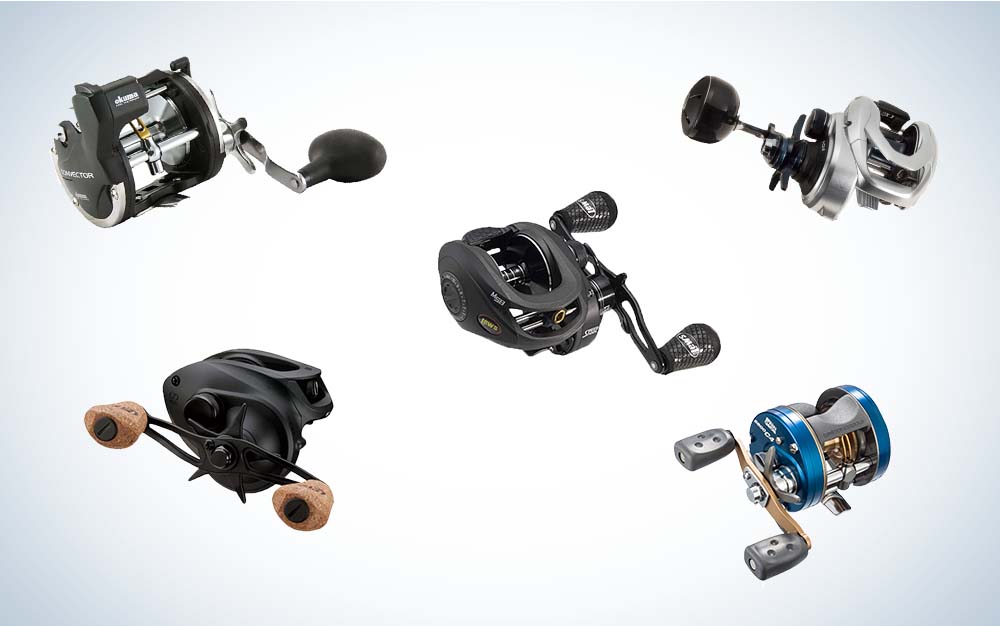 Get the right reel to help you land the fish of 10,000 casts

The right musky reels are critical to fight, control, and land a toothy monster. The so-called “fish of 10,000 casts” can confuse and beguile anglers. When you’re ready to give up, they give you another window into possible success. When the bite finally comes, they’ll use every trick in the book to outsmart or outpower you. And if you have subpar equipment, the fight won’t last very long.

Since they can make anglers’ lives miserable—throwing cast after cast without a bite—musky addicts have developed numerous tactics to even out the playing field. They involve artificial lures, live bait, casting, trolling, and drifting. Each one can benefit from particular equipment choices. Your reel, however, is the most important piece of gear. There are dozens of options that will get the job done, but only a few rise to the top of the heap when it comes to comfort and effectiveness. Here are the best musky reels on the market.

How We Picked The Best Musky Reels

We’ve chased muskies in prolific fisheries like Lake St. Clair and had them inadvertently show up behind our lures elsewhere. We’ve learned that their unpredictability requires a lot of arrows in the quiver, including casting big lures, casting small lures, trolling, and using natural bait. There are certainly reels that can cover several of these presentations, but sometimes a specialized tool is the best option for the job. I based my selections on the following criteria:

Why it Made the Cut: A saltwater reel that can take a beating and handle big lures, big waves, and big fish.

Shimano initially developed the wide-ranging Tranx series to conquer saltwater fish. Luckily, this reel translates perfectly to the musky world. Everything about them is beefed up, from the handles to the 22-pound drag system, and they incorporate the best of Shimano’s latest technology—Hagne, X-Ship, and HEG. I’ve used mine for everything from smallmouth bass to tuna, and they’ve never let me down. Most importantly, this reel feels good even after years of using it. The 400 is the workhorse, but for smaller musky lures, there’s a 300, and for upsized presentations or more line capacity, the 500 gets the call. They excel at casting but can be used to troll in a pinch.

Why it Made the Cut: This bargain-priced reel allows anglers to set up a complete spread on a budget and still stand up to vicious drag-ripping strikes.

Whether you’re chasing muskies on Lake St. Clair, the St. Lawrence River, or a Canadian shield lake, the best trollers have developed scientific systems to make their spreads most effective. This involves not only the number of baits, but also how far back and how deep they run. Okuma’s line counting reel makes replicating a setup simple, and while the Convectors are inexpensive, they’ll still hold up to hard strikes that threaten to rip the rod out of the holder. They’ve incorporated stabilizing systems for increased durability and high-grade brass main and pinion gears to hold up over time. The drag range is customizable, meaning it’ll slip when you need it to, but hold tight to crank in trophies.

Why it Made the Cut: Super high-speed gear ratio takes lures into overdrive without sacrificing power.

Muskies are known for following lures and turning away at the last minute. Sometimes the best way to combat this annoying indecisiveness is with a high-speed retrieve that forces them to react. In the Concept A3 Gen II, 13 Fishing has built a reel that brings ultra-high-speed retrieve ratios to the table but still packs a punch with 40 pounds of drag. It is a true marriage of form and function. That includes a brass drive gear, a corrosion-resistant coating, and a low-friction six-way braking system. Musky fishing is physically demanding under any conditions, but that exertion doubles when the fish react best to a fast retrieve. This reel is lightweight but can still handle giant fish without tiring out anglers.

Best for Smaller Lures and Multispecies

Why it Made the Cut: This reel may be styled as a heavy-duty bass buster, but its lightweight construction allows all-day fishing and multi-species use.

Lew’s has taken the guts of one of their tournament-proven bass reels and beefed up every aspect of it, from the double-shielded bearings to the thumb bar and drag system. The braking system is highly-adjustable, allowing anglers to throw different sized lures in varying wind conditions. Plus, the Winn Dri-Tac knobs stay comfortable and non-slippery in any weather. If you’re a serious musky angler, this reel will handle many situations, but if you only chase them once or twice a year, it won’t sit in storage. Instead, it’ll find plenty of opportunities in the salt or throwing swimbaits for bass.

Why it Made the Cut: An excellent reel for casting big lures and special features for fishing live bait.

Conventional level wind reels get most of the love in the musky world, but there’s no shame or harm in using a spinning reel. In fact, they are better for specific techniques like fishing live bait. Daiwa’s beefy Free Swimmer allows big toothy critters to take natural bait without resistance, making them less likely to drop your offering. That leads to more and better hookups. Even if you use natural bait sparingly, the Free Runner still operates perfectly for casting and reeling. It has oversized gears, a beefy tooth pattern, and a round EVA handle that allows you to retain a grip during the retrieve and subsequent fight.

Why it Made the Cut: A longtime bulletproof standard of baitcasting reels, the Ambassadeur has a proven track record of excellence.

The round Ambassadeur is an iconic reel in the fishing world. While it may not look modern, plenty of top musky chasers trust its proven design and simple yet sophisticated construction. The carbon matrix gearing is a substantial improvement over the already-solid systems these reels employed in yesteryear. Plus, the centrifugal braking system is a no-nonsense way to keep your line in check. There is also an even less expensive C3 version, but it lacks a thumb bar for spool release, so keep that in mind when choosing one over the other.

Things to Consider Before Buying The Best Musky Reels

They are dubbed as the “fish of 10,000 casts” due to the difficulty of not only landing a musky, but just hooking one. When the time comes, your gear must be fine-tuned and ready to go. This means musky lures, flies, rods, and most importantly, reels. Muskies are very powerful and have sharp teeth. One wrong move and they’ll break you off. Make sure to consider these factors before you purchase your next musky reel:

Muskies usually demand heavy line to withstand the size of the lures and baits and to hold up during a brutal fight. That could mean monofilament, fluorocarbon, braid, or wire, but it will likely be strong, and you may need a lot of it. Don’t skimp on storage capacity because it will impact every aspect of the process.

Sometimes muskies want their meals served up in a slow, gliding manner, and other times, it takes a warp speed retrieve to tempt them. Choose the speed that will make it most comfortable to achieve what you need for success. Traditionally, super high-speed reels sacrifice cranking power on big fish, but that has changed for the better in recent product generations. Look for a gear ratio that can burn a bait back and retrieve a lure slowly.

Muskies don’t necessarily go off on long, spool-emptying runs, but they will pull line either on the strike or surge at boatside, and if your drag doesn’t engage at exactly the right increments, it will lead to pulled hooks and lost fish. The drag not only needs to be easily adjustable, but also be able to retain its power and smoothness during runs.

Q: Do I need an expensive reel for musky fishing?

You do not need an expensive reel for musky fishing. It is more important that the reel be suited to the task at hand, whether that be casting, trolling, or some other application. Fortunately, there are now many high-quality reels in the low- to mid-price range. Be sure to check bearing counts and other key features to make sure that no corners have been cut to reduce the price.

Q: Can I use a spinning reel for musky?

A spinning reel (with a matching spinning rod) can certainly be used for musky fishing. It still needs to have proper line capacity and a drag system meant to withstand the power of these vicious predators. Spinning reels are used primarily for casting and live bait fishing, not as much for trolling. When using a spinning reel it is critical to take steps to prevent line twists.

Q: What is a good gear ratio for musky fishing?

While higher and lower speed reels have specific applications, something with a gear ratio between approximately 6:1 and 7:1 will cover a remarkably wide range of applications. It’s critical to be able to slow down or speed up when the muskies get finicky, and they clearly seem to prefer particular speeds or cadences on many days.

Even the best and most successful musky anglers will likely experience long periods of frustration. When you think you have these fish figured out, they change or show some other form of wariness. Your equipment should make the search easier and more pleasurable rather than compounding the heartache. That starts with reels. If they’re cumbersome to use or fail at inopportune times, they will ultimately make the brief windows of happiness even more infrequent.