Is this air rifle worth the cost? We tried it to find out 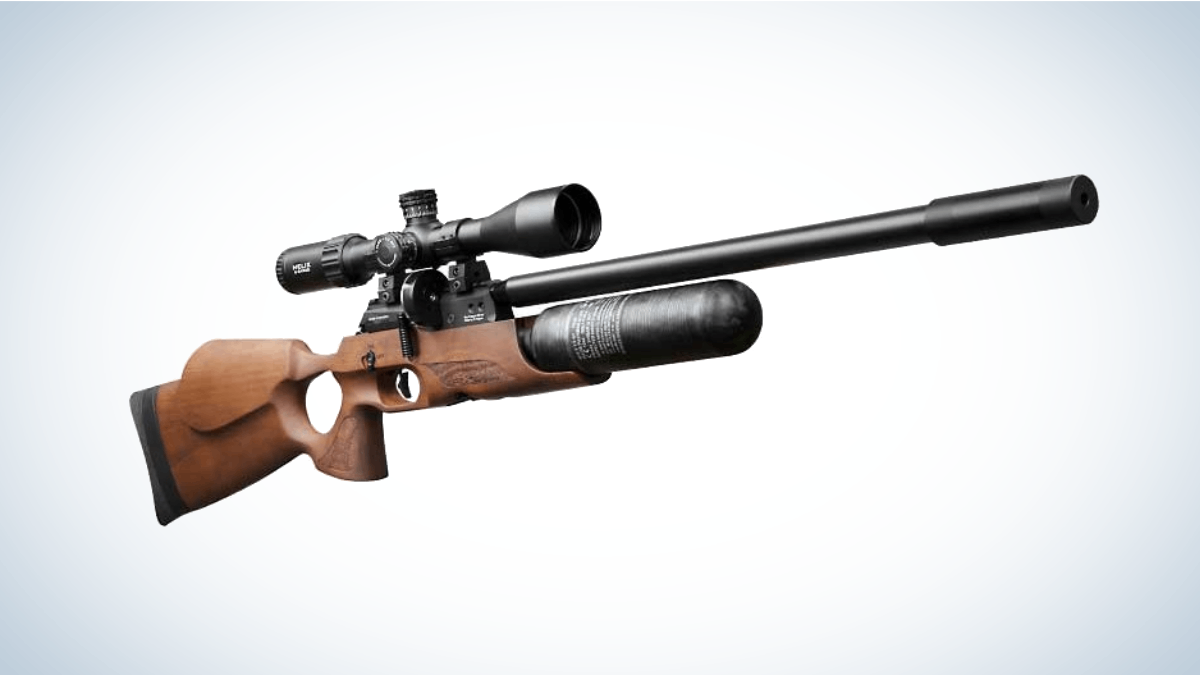 The FX Crown MKII is an updated version of one of the Swedish air gun maker’s most versatile and best-performing rifles. Among the key improvements is a larger plenum and valving to increase power, as well as an updated barrel that’s stiffer and lighter. We reviewed the Continuum package, which includes two barrels: a 380 mm compact barrel for hunting and plinking and a 700 mm barrel for more power and long-range accuracy.

What is the FX Crown MKII?

The FX Crown MKII is a high-end pre-charged pneumatic air rifle that’s both powerful and adjustable. The Continuum package is a relatively cost-effective, two-guns-in-one option with a short barrel that’s ideal for hunting. When outfitted with the 700 mm barrel, the rifle is a range machine capable of excellent accuracy. Our test rifle featured an ambidextrous walnut thumbhole stock.

The Continuum is also available with a synthetic stock (for $200 less) or a GRS laminate stock ($200 more). The package ships in a hard plastic case. A moderator (made by Donny FL for FX) is also included.

How does the FX Crown MKII work?

The FX Crown MKII features a 480 cc carbon fiber-wrapped cylinder that’s filled using a Foster quick connect located on the underside of the forestock between two manometers—one that provides the tank pressure; the other that shows the regulator pressure. The maximum fill pressure for the tank is 3,265 psi (250 BAR). The max regulator pressure is 160 BAR.

The updated Crown features a plenum that’s 28 percent larger than the previous model, along with a larger 6.5 mm valve to increase power. A side lever works a rotary magazine that holds 18 pellets in .22 caliber (16 in .25 and 13 in .30). Dials to adjust the power (low-medium-high) and hammer spring tension (both micro and macro adjustments) are conveniently located on the left side of the receiver. Both barrels are FX Superlight STX barrels, with the barrel liners no longer housed in a steel tube but rather in a sturdy barrel attachment that increases rigidity while decreasing weight. The stock features an adjustable cheek piece and a rubber butt plate that can shift from side to side.

How We Tested the FX Crown MKII

I intensively tested the FX Crown MKII Continuum over several months, shooting hundreds of pellets of various types and FX Hybrid Slugs through both barrels and at a wide range of power, hammer spring and regulator settings. Much of the shooting was in a backyard range at 25 yards but I  spent several long sessions at the local range shooting at 50 to 100 yards.

I also had the chance to put the rifle to use in the field during Virginia’s spring gobbler season (alas, no shots were fired) and during dozens of nighttime missions to help a friend who was dealing with marauding rats from an apartment complex near his home. The rifle arrived from FX with the excellent Element Titan 5-25 by 56 mm FFP scope. I tracked velocity using the FX radar chronograph.

While the Impact M3 is the undisputed popularity king of the FX’s lineup, the Crown MKII offers comparable performance in a more traditionally styled platform. Whether shooting with the shorter barrel at medium and low power settings, or with maxed out power and the longer barrel, the rifle was accurate while also being pleasantly frugal on air use.

The walnut stock on our test rifle not only looks good, it feels good. The thumbhole stock is comfortable and easy to adjust to find a good shooting position. The large objective lens on the Titan, along with the hefty diameter of the 18-shot magazine, requires high scope mounts so I found that I needed to pull the cheek piece to its highest setting. The Picatinny scope rail has 20 MOA built in to facilitate the long-range shooting you’ll want to do with this rifle.

The sidelever bolt was super smooth and the magazine fed flawlessly with both pellets and hybrid slugs. The two-stage adjustable match trigger is a joy, with a solid wall and a crisp break. I didn’t bother trying to adjust it because the factory setting suited me well.

Out-of-the-box performance was outstanding with the factory tune. Half-inch single-hole groups were the norm at 50 yards shooting the 18.1-grain Diablo pellets from FX. A rifle like this begs to be tweaked, of course, so tweak I did. Switching out to the longer barrel, bumping the regulator up to about 150 BAR, and setting the power on high with an almost-maxed-out hammer spring produced velocity ranges slightly topping the 920 figure provided by FX (with 18-grain pellets).

I achieved my best 50-yard groups—the best being five shots in ⅜ of an inch—with the long barrel and modest power settings. One day, while shooting off a bench in my yard, I decided to dab some wet cat food several places on my target to attract flies. The buzzing pests didn’t stand a chance.

Heavier pellets, such as the 22.14-grain Barracuda Match, grouped slightly better at higher power settings. Those pellets were the best performers for me at 100 yards. I could put most shots from a magazine into a 2-inch group, though I could never manage a group without at least a couple of fliers, which were no doubt my fault. In the hands of a talented benchrest shooter, this rifle is certainly capable of single MOA groups at 100 yards.

No single air rifle excels in every situation. With its two barrels and extreme adjustability, the Crown MKII Continuum package comes close. This is a rifle that will have lots of success in benchrest competitions—in fact, it already is. But with a quick barrel change (which takes about two minutes) and a few adjustments, it can become a compact, fun, quiet ,and ridiculously capable backyard shooter, pest gun, or hunting rifle.

Will some casual shooters gravitate to the Continuum just because? Of course. We all know folks who drive their Porsches only to the grocery story and back, don’t we? But this is really a gun for enthusiasts who will have the time and desire to push the rifle’s capabilities and to test their own ability to tap its potential.

It’s hard to find fault with a rifle that looks great, is extremely well-made, and can shoot the lights out, as the saying goes. If there is any sticking point with the FX Crown MKII Continuum, it would likely be the price of admission. Add the kind of good glass that the rifle deserves and you’re knocking on the door of $3,000. Granted, it’s much more economical to shoot a pellet gun than a firearm, but that’s still a significant amount of cash for any rifle.

Hunters may also struggle to figure out a way to carry the gun in the field since the design is not exactly sling-friendly. For turkey hunting, I tried a loop sling that I use for my Hawken muzzleloader but the balance was too wonky so I ended up just carrying it. That was okay for short jaunts but wouldn’t be ideal for long treks in the woods.

Is the FX Crown MKII a Good Gun?

With its precise tuning capability and resulting match-grade performance, and when outfitted with the 700 mm barrel, the FX Crown MKII Continuum air rifle is a benchrest dynamo that will help good shooters win medals and money. The shorter barrel part of the Continuum package adds a casual, fun element. It’s not exactly two guns for the price of one, but the FX Crown MKII Continuum certainly offers two different personalities—both of them winners.