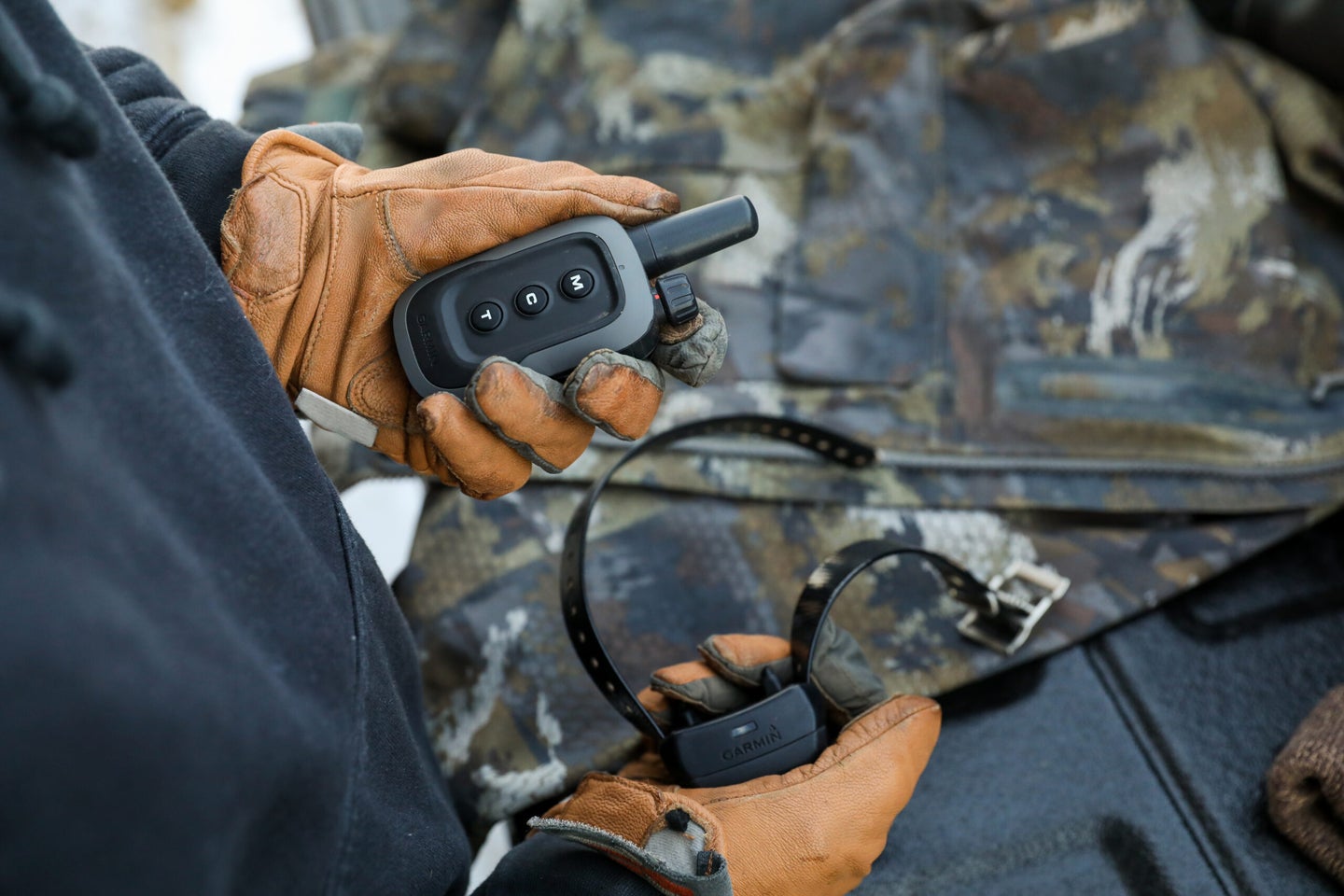 The Garmin Delta SE training collar is easy to use in the field and at home. Garmin
SHARE

Hunting seasons last a couple of months, but our dogs live with us every day of the year. We need them to be well-behaved family pets as well as reliable hunting partners. That means training is about more than teaching a dog to retrieve or hold a point. It’s also about teaching dogs to stay off of counters, to have good leash manners, and to generally behave. A training collar lets you correct a dog instantly in the outdoors, and can also help it become a good citizen around the house.

The Garmin’s Delta SE is a collar that can pull double duty at home and in the field. It is a compact, bare-bones collar from one of the best in outdoor electronics. It is the perfect size for training, and a good entry-level choice, too.

The Delta SE transmitter unit fits in the palm of your hand and weighs only 3 ½ ounces. It has a stub antenna next to an intensity selector knob offering a vibration setting and stimulation (“stimulation” being the polite term for “shock”) levels from 1 to 10. Three buttons marked “M,” “C,” and “T” let you choose momentary or continuous stimulation or a tone. There’s a sliding collar selector switch on the side if you want to run two collars at once. It has a USB charging port, a green LED to let know the thing is working, and a lanyard. That’s all there is to it. The collar receiver/collar is light and compact. It also comes with long and short contacts for long and short-haired dogs.

The collar charges via a corded plate that clips on the receiver. The use of a plate means there is no USB port to admit mud, seeds, and water as there is with other collars. Moreover, the collar is just as waterproof as any other Garmin training collar, so you can use it for retriever training with confidence. It also has a half-mile range, which is more than enough to reach out and correct big-running dogs.

At Home and In The Field

After charging and pairing my collar and transmitter per instructions, I put it to work right away helping my young German shorthair, Zeke, learn better leash manners on our daily walk around the block. With the intensity knob set to “V,” I corrected Zeke every time he pulled. The vibration didn’t hurt, but he didn’t like it, and by the end of our ten-minute walk he had learned the command “don’t pull.” Just like that, our walks are more civilized.

Once you get past “vibrate,” the intensity levels go to “10” and the “10” on the Delta SE equals the highest intensity of any collar in the Garmin lineup. The only time you would ever use a setting that high would be to break a dog of undesired, dangerous behavior like running deer. Even then, you probably don’t need full power, so there is no question that the Delta SE is just as capable of delivering a full range of stimulation as any other collar. And, while other collars offer more gradations, an amateur training their own dog doesn’t need infinite levels of stimulation any more than most of us need a 30-speed bike instead of a 10-speed. You can also train the dog to associate the tone with stimulation, then phase out the stimulation and train with the tone only.

As for battery life, Garmin claims the dog device will run for 60 hours per charge, and the transmitter for 70 hours. I can only say that it lasted three weeks between charges and I often forgot to turn it off after using it. As long as I remembered to keep it charged, the Delta SE worked without any problems at all.

In the field, the Delta SE was just as compact and user-friendly as it was at home. The simple controls made it easy to use while I was out hunting. The only thing I might change would be to add a stouter lanyard or a molded carabiner hole somewhere in the transmitter so I could clip it onto the D-ring of a vest to be extra sure I kept track of it. An E-collar customer service rep once told me that he termed the day after any Sunday during hunting season “Transmitter Monday” because of the number of calls from weekend warriors who lost transmitters over the weekend. That said, I had no problem keeping track of the Delta SE transmitter.

The Delta SE bundle of transmitter and dog device sell for $249, and you can buy an additional collar for running two dogs at once for $129.