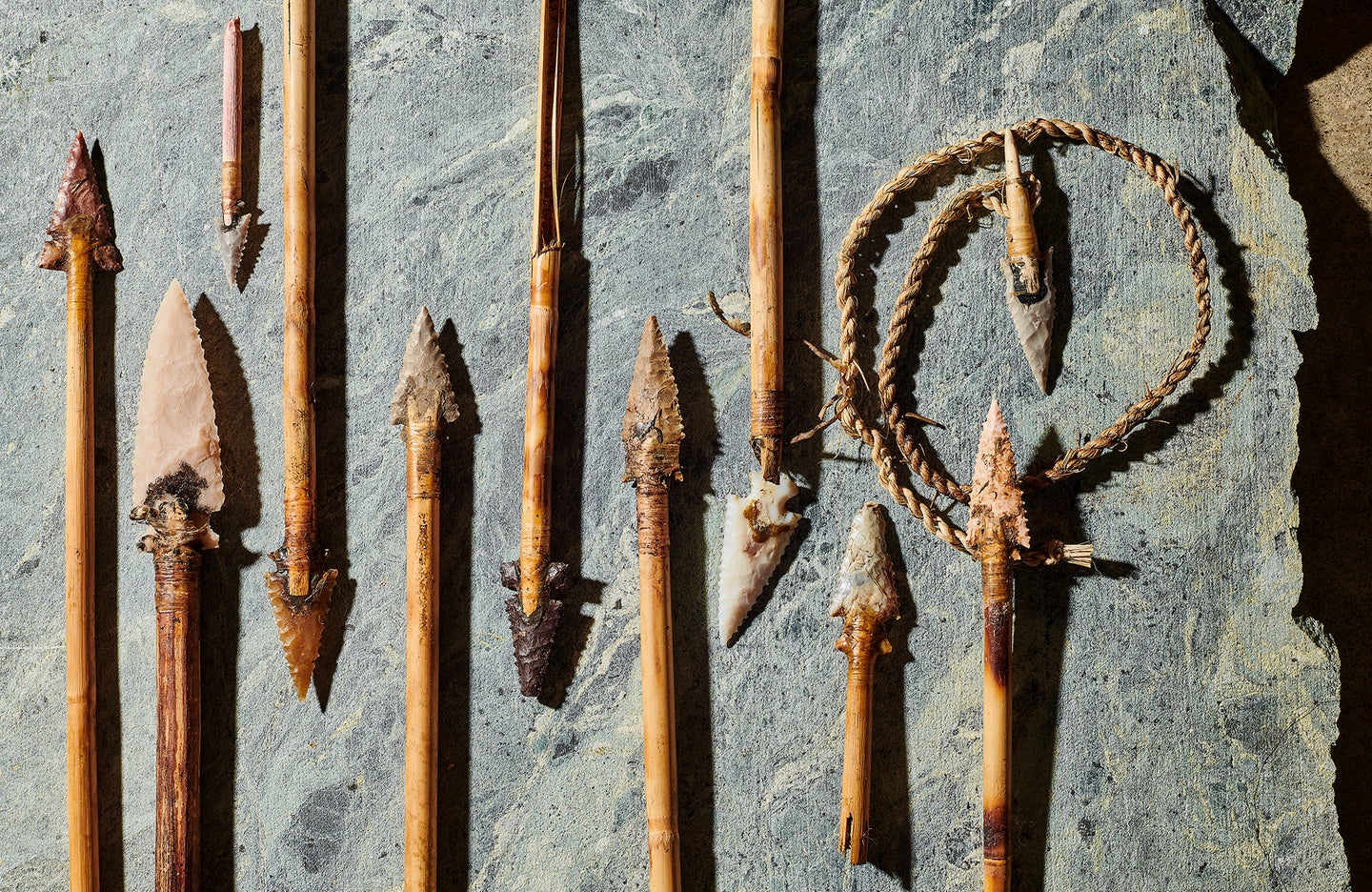 A collection of flint arrowheads, atlatl points, and harpoon points—all knapped by Gill, attached to wooden shafts, and used by him to kill a variety of big-game animals.

The Primitive Arts: How an Expert Crafts Stone-Age Hunting Tools by Hand

WHEN RYAN GILL was 13, his father gave him a stave—or long stick—from a black locust tree, along with a single wood rasp. By the time his dad got home from work that evening, Gill was standing over a mound of wood shavings and holding a primitive-looking bow in his hand. After stealing a string from a Bear recurve, they strung Gill’s first bow and shot it into the night—launching a lifelong obsession, Gill says, to re-create and hunt with the tools of our Stone Age ancestors.

Today, as the owner of Hunt Primitive, Gill spends most of his waking hours building self bows and atlatls and crafting wooden arrows, spears, and knives tipped with stone points he knaps by hand from flint and obsidian. When he’s not making them, he’s hunting with them. Gill has taken more than 50 game animals using his own primitive gear. He’s tried modern equipment, but says it’s the most basic tools, and the art of making them, that let you completely immerse yourself in the hunting process and get the most out of it.

Clockwise from top left: Crafted from Georgetown chert, this point will start as a knife blade and become a spear point and then an arrowhead as it wears down; a head made from Florida agatized coral, reflecting the Clovis style in use 12,000 to 15,000 years ago; a stone point knapped from Pennsylvania jasper, a material popular 7,000 to 9,000 years ago; a red-hued chert head reflecting the Dalton style, which was common in the late Paleo era, about 12,000 years ago.

Gill, 38, leans on the workbench in his shop. By the age of 21, he’d become so proficient at crafting primitive hunting gear that he began selling his handmade tools and teaching others to build and hunt with their own. Today, his business keeps Gill and his wife, with help from their two children, busy full time filling orders. “Fred Bear was my idol, not only for his hunting skill, but for what he did to popularize modern bowhunting,” Gill says. “I want to be the primitive archery answer to Fred Bear.”

Gill used this harpoon point to spear a Florida alligator in 2019, after paddling a canoe to within 8 yards of the animal. “Primitive alligator hunters used canoes because they’re so quiet,” says Gill, “and the gator doesn’t really see it as a threat until it’s too late.” The stone point was initially attached to a spear. Once a gator is harpooned, the point stays in the animal but rotates and slips off the shaft, leaving the cordage for the hunter to hang on to. “I hit the gator in the lungs, and it sank to the bottom. Then I used the cord to pull him up.”

Gill has killed two bison with primitive gear. For the first, he used a self bow and the arrowheads shown at top right. For the second, he used an atlatl to propel a long spear, the foreshafts of which are the sections of wood shown at center. Gill used the stone knives, which are part of his regular hunting kit, to dress and butcher the animals. “I wasn’t nearly as nervous on the gator hunt as I was when I hunted bison. If you can take a bison with primitive gear, you can take anything.”

Gill has built hundreds of bows, all crafted from a single piece of wood, using only basic tools. “One thing I love about self bows is that each one is totally unique,” he says. “I’ll make a snakeskin-backed bow, like the top and bottom two bows shown here, and I’ll think, That’s the prettiest one I’ve built. But then I’ll make one like the honey-colored bow in the middle, and I’ll change my mind. Truth is, I love them all.” Gill used the bottom bow to take his first bison and the one above it to kill several deer and a hog. The others are for sale.

These are the materials and tools Gill uses to knap arrowheads, spear points, and stone knife blades. The process starts with a large chunk of chert or flint (bottom center). That rock is chipped into smaller pieces (right and top), and these are finally shaped into finished points (left). He uses the round stone in the center to break off the initial pieces, and antler of descending diameter to shape a point into a finer and finer form.

To make most of his bows, Gill relies on a few comparatively modern hand tools, including a draw knife and round file. But he learned early on how to do it using only what primitive hunters had on hand. He starts by shaping the wood with a hand ax (center left). He removes more material by using the ax to strike an antler chisel (center middle). Then he finishes the bow using stone scrapers (center right). “I’ll be honest, it’s pretty tedious and kind of sucks,” he says. “Doing it with metal hand tools is plenty difficult enough.”

Clockwise from top right: Striking a “mother stone” of chert with a rock hammer; separating a large flake, or spall, for further shaping; creating the point’s final edge by “pressure flaking” with a small antler tine. “This process took me years to perfect,” says Gill. “It’s so hard on the hands that my doctor told me mine would become useless if I didn’t stop. But I switched from antler to a copper shaping tool, and now I can knap all day with no problem.”

Gill shoots one of his hunting bows. “I snap-shoot, and while I never touch a part of my face with any part of the bowstring or release hand, I’m within a quarter inch of the same anchor point every time,” he says. Gill starts aiming before drawing the bow, then he pulls back and releases in one smooth motion. “My dad taught me to shoot a bow just like a primitive hunter would have instructed his son. ‘Just go out and shoot,’ he told me, and I did, using the form that felt right and comfortable to me.”

Gill launches a spear with an atlatl. The thrower, in his right hand, is little more than a stick, but it acts as a lever that adds power. It has a triangular spur that fits perfectly into the concave end of the spear. Just like an arrow, the spear oscillates up and down as it begins its travel, but the large feather fletchings stabilize and correct its flight as it approaches the target. “It took me forever to learn because I refused instruction, wanting to figure it out myself,” says Gill. “But I can teach a person to be proficient with an atlatl in a few lessons, and you can be hunting with one in a matter of days. Then all you have to do is sneak within throwing range of an unsuspecting animal.”