Want to hit the road and just hunt? We did just that last fall, and this is some of our favorite gear from the trip 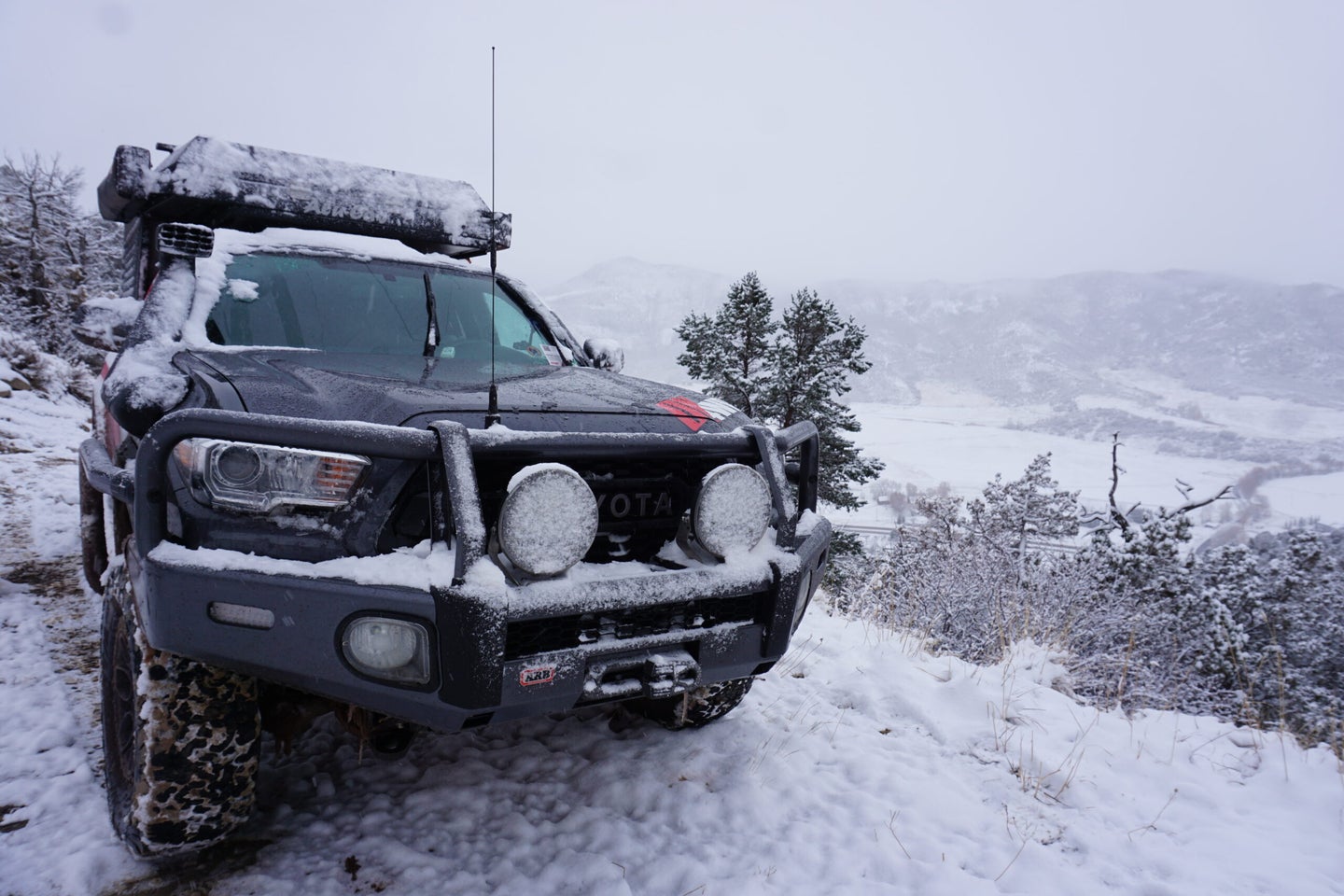 If you want to live out of your truck and hunt just about anywhere, you're going to need reliable equipment. Matthew Every
SHARE

On a recent cross-country hunting trip, my wife and I had a chance to test out a lot of gear. From the Colorado Rockies to the swamps of Tennessee, we hunted for upland birds, deer, waterfowl, squirrels, and elk while living out of our truck. If you’d like to hit the road and just hunt, the following gear will help you along the way. All of it is rugged and reliable enough to stand up to the months of travel on the road.

This case will secure your bow, period. I have so much confidence in it that sometimes I just leave it outside, no matter the weather. You can throw it in the back of a pickup, let it get rained and snowed on, pull your bow out, and go hunting. It also has room for the extras—which are essential when you’re miles from a bow shop. You can keep plenty of arrows, broadheads, an extra release, and some string wax in the different pockets. It’s not the lightest bow case, and it definitely takes up space, but you can be confident that it will withstand any amount of banging around.

You can stack up critters from coast to coast, but if you can’t get the meat home, it’s not worth leaving your front door. When we set out on our trip, we wanted a cooler that could hold everything, so we went with a Yeti Tundra 160. If you’re traveling with buddies and have multiple tags, this is the cooler for you. And if you get some dividers, you can use half of the cooler for your food and the other half for frozen meat. When you’re not on the road, it’s perfect for aging deer quarters when it’s too hot outside and you don’t have space in your refrigerator.

There are prickly things all over the country that can make upland bird hunting miserable. In thick brambles, these chaps are like body armor. They’ll keep cactus thorns at bay in the desert and rosebushes out of your thighs in the woods. Unlike a pair of brush pants, you can shed them when it gets too hot or when you find gentler cover.

When my wife was looking for a pair of boots that were both comfortable for long rides in the truck and sturdy enough for the trail, she decided to go with a pair of Lowa Explorers. They’re tough and light and good for hunting in fall to moderate winter temperatures. They’re also not too bulky or stiff, so they won’t get in your way while driving. Lowas really shine when you have a load on your back, and these aren’t an exception. Personally, I wear the Tibets for hunting just about all year round. I’m on my second pair, and they haven’t let me down yet.

I first tried an SX4 on a turkey hunt two years ago. I was impressed by how lightweight and soft-shooting it was. When it came time to pick a solid, general-purpose shotgun to bring along for this trip, we picked a 20-gauge SX4. With multiple screw-in chokes, it’s right at home in a duck blind or in a cornfield chasing pheasants. The SX4 also ate every shell we put through it from light grouse loads to full-blown 3-inch magnums. It’s also cheaper than other premium autoloaders. For under $1000, it’s hard to beat.

I’m not a huge fan of disposable-blade hunting knives. It’s not that they don’t work, I’m just used to bringing either a fixed blade or folder into the field. And for a folder, the DTS from Gerber is a good choice. It’s light, good for hunting off horseback or ATVs (fixed blades can end up where they shouldn’t if you fall off a horse or 4-wheeler), and it holds an edge. To help hold that edge, the DTS also has a D2 steel “tendon tool” for cutting joints and tough skin. Anyone who’s popped a joint with their knife knows how bone can dull a blade and the tendon tool saves your main skinning knife from abuse. I also like that it’s orange and easy to find on the ground and has a reflector for picking up light in the dark.

Not all truck-mounted awnings are created equal, and the Alu-Cab Shadow awning is in a league of its own. It’s a big investment, but if you hunt in wide-open spaces with little tree cover, it’s really an asset. We used ours to give our dogs some shade during an unseasonably hot day in Minnesota. It’s easy to set up and take down and it has a coating that reflects the sun. Some people have compared temperatures under the Alu-Cab awnings and the competition, and the Alu-Cab is cooler.

Space was at a premium in our truck bed camper, so we needed chairs that had a small footprint when packed away, but were still comfortable. The Timberline from Klymit gave us that in spades. They pack into about the size of a big thermos and can be stashed just about anywhere. They’re also easy to assemble. I also like that they’re small enough to fit into a plastic tote box—which makes them easier to keep dry in the back of an open pick-up.

I got this lantern to use in camp in case the lights on our truck went dead, but now I bring it on just about every backcountry hunt I have. A lantern is definitely a creature comfort when trying to set up a lightweight pack—one or two headlamps are usually plenty. But this one is an exception because it serves two functions: light and power. The light is nice, but what’s even nicer is its ability to be used as a battery backup for your phone. It’s rechargeable and it takes AA batteries giving you two solid battery options.

Before getting the Gas Growler, I relied on green propane bottles to run my cookstove. They’re great, but they have their drawbacks. For one, they’re easy to burn up if you’re using a portable stove for days on end. Two, when you do run out of gas, what do you do with the canister? I have a pile of spent or half-spent green propane bottles at home, and I don’t know exactly how to get rid of them. The Ignik changes all of that. Compared to the green bottles, it’s a big initial investment, but one that’s worth it. You get more capacity—one Ignik refill equals five green bottles—and, pound for pound, refiling only costs a fraction of the disposables.

I’ve had a few small grills, but eventually, they all got burned out and started to fall apart. The PKGO is altogether different. It’s made of cast aluminum instead of sheet metal and the hinges are part of the casting. The cast-iron grates offer two levels so you can get food closer and further from the flame. The smoke vents are easy to use, too, and so far haven’t been fowled up to the point of getting stuck. But the coolest thing about this grill is the Flip Kit. It lets you take the lid and turn it into another grill, giving you two times the grilling space in one small package. If your two-person hunt turns into a four-person hunt, you’ll be able to feed everybody. So far we’ve used it in both configurations all over the place, and it doesn’t disappoint.

Big, wool blankets have been taken camping for hundreds of years. Why? They work no matter what. Today it’s easy to forget about wool especially with so many synthetic/down options out there. But unlike down quilts, wool won’t melt and spill feathers everywhere when it comes in contact with a hot coal from the fire. It will also keep you warm when it’s wet and will boost the heat rating for any sleeping bag. We have a queen-sized blanket so it can be folded in half to double the warmth, and we’ve used it for years. Lay it on the floor of a tent to get your feet off the ground, fold it up for a dog bed, wrap yourself in it around the fire, or roll it up and sit on it like a stool.

The benefits of wool don’t stop at a blanket. I’ve switched all of my baselayers from synthetic to wool over the years for one reason: It doesn’t stink. Wool is antimicrobial. You can wear it for days, and you won’t smell terrible. It’s also breathable and wicks sweat. In fact, if I could only pick one high-dollar piece of gear to hunt with, it would be a nice set of wool base layers like these from Smartwool. On what I like to call DEFCON-1 cold days, I combine them with Filson heavyweight merino baselayers. The Filsons are a bit looser and fit nicely over the Smartwool, and when worn together it’s an unbelievably warm combination.

I like hunting with first-focal-plane scopes because the reticle’s measurements remain the same no matter what magnification you’re on. (However, the size of the reticle will increase). That makes long shots easier in heated situations because you don’t have to dial a turret—you can just adjust for the shot with you’re reticle. I also like that the RS.1 is available without a cartridge-specific turret. This allows me to hunt at different elevations and on different rifles and just use a ballistic calculator to get my holdovers. The turrets on the RS.1 are capped so you won’t bump them while hiking, and they can be adjusted with your fingers when uncapped. Paired with a lightweight rifle (like the Springfield Waypoint), it’s a solid setup for everything from Rocky Mountain Elk to river bottom whitetails.

Read Next: One Wild Ride: A Hunting Road Trip Across America

For years I hunted with a traditional external pack frame. I liked how rigid the metal frame was compared to internal frame packs. But when I wanted to upgrade to something newer, I went with the Sitka 6500. The pack has an internal metal frame which is a perfect platform for heavy gear and animal quarters. So far, I’ve helped pack three mule deer with it and each time it’s performed perfectly. The straps are strong and well padded, and the pack is adjustable for different body types. When I’m not using it at full capacity, I use it as a daypack and tighten all of the lashings so it has a small footprint. I’ve found that it’s small enough to not get snagged on brush, and when you do shoot an animal, it’s nice to be able to expand it for packing meat. There is also a front chamber that can separate the meat from the rest of your gear, so you won’t get everything all bloody.