Your food plots are in, and your cameras are out. Now's the time to make sure your tree stands and blinds are ready for the season 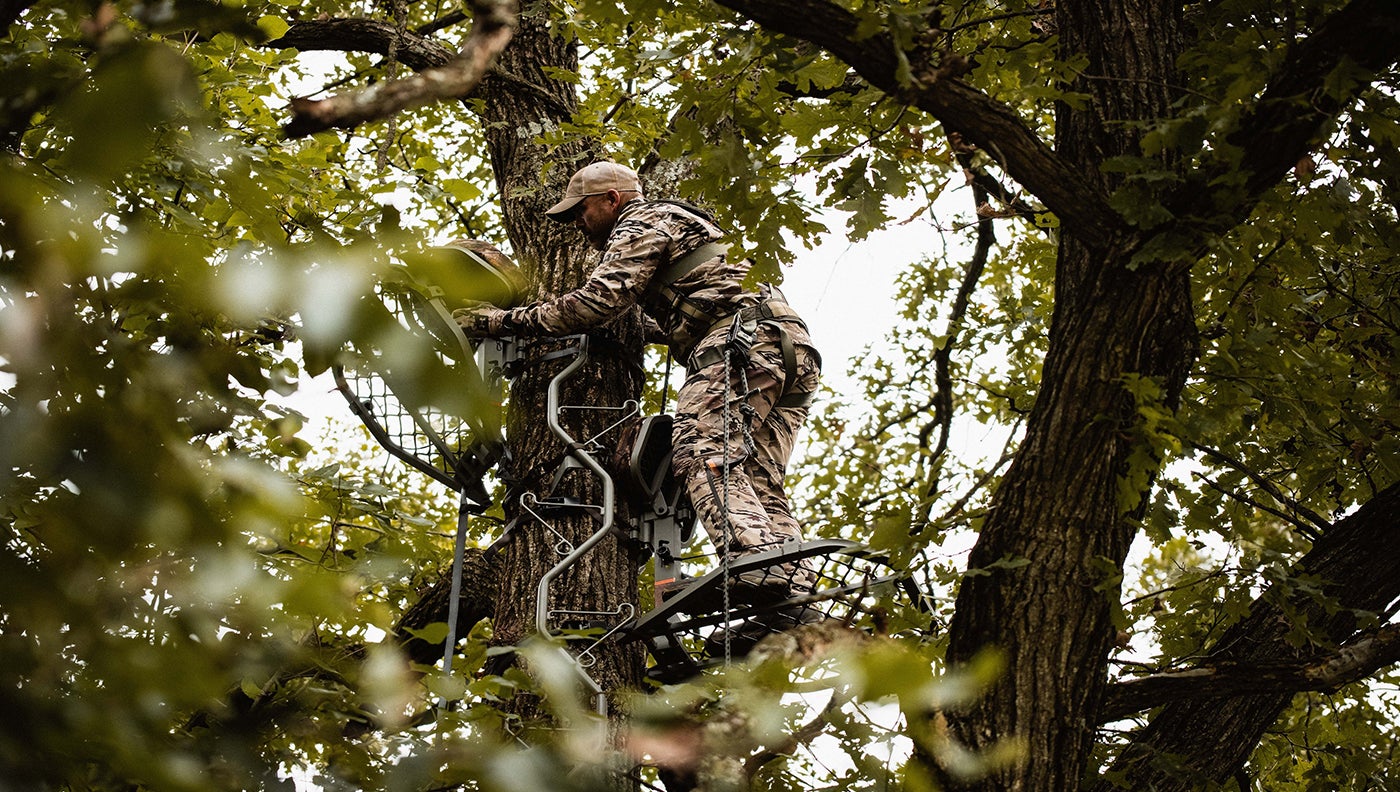 Now's the time to make sure your stands, steps, and safety lines are in good working order. Summit Tree Stands
SHARE

Most whitetail nuts recognize that our sport is now a year-round obsession. But admit it, with most of your food plots in and the first cameras of the year hung (you do have all that done, right?), it seems like a perfect time to take a short breather before things shift into high gear for late summer.

Forget it, buster. There’s no time to waste between now and the early bow openers when it comes to prep work. What now, you ask? Stand and blind prep. Those tree stands, blinds, and shooting houses that have been neglected since last fall need your attention. And now is the perfect time to get after it, with the season still many weeks away. Your intrusion into the timber won’t have any long term effect on deer behavior or movement, and you’ll have your ambush spots ready for action for opening day. So let’s get rolling on this basic checklist. Here’s what you need to do now.

If you’ve left a hang-on stand out for more than six months, the attaching strap(s) definitely needs attention. Extended exposure to snow, rain, and sunlight can rot the material and compromise the strap’s life and effectiveness, which. of course, translates directly to a safety issue for you. While some straps are thick and durable and can withstand some weathering, others can nearly disintegrate, so be overly cautious when evaluating strap conditions. If they show signs of wear, swap them out immediately, either with replacement straps from the manufacturer (most companies offer these at a reasonable price) or add a ratchet strap or two. You can’t be too safe when it comes to tree-stand straps.

If your stand attaches with a chain, this is a perfect time to pull the stand and rehang it, using a slightly longer loop in the setup. This allows the tree to grow and expand during the summer growing season and prevents big problems from happening if the stand is left unattended. Anyone who’s hunted from hang-ons long enough has forgotten a stand or two in the timber only to return and find the strap or chain has literally grown into the tree. At the very least, unhook the chain or unfasten the stream, add some slack, and leave it hanging for now. As the growing season winds down and the opener approaches, it’s a quick and simple process to climb up and reattach the stand properly.

While the popularity of climbing sticks and ladders, as well as ladder stands in general, tells me that screw-in tree steps are on the way out, lots of people still use them. But like a strap or chain, steps can grow into a tree and damage it. Also, steps left out in the cold, snow, and rain can rust or corrode them. Now is the perfect time to pull them, bring them home for some maintenance and give the stand tree a break for a few weeks. At home, inspect them for signs of corrosion or weakness, and lubricate them after cleaning. Light machine oil or WD-40 works well; if you’re worried about scent use vegetable oil instead. If I intend to put the steps into the original holes, I’ll jam a stick in each one after I unscrew the step; this makes finding the old spots a snap when I return to install the steps again.

If you’re using climbing sticks or a ladder to reach your sets, perform the same routine you did for stand straps or chains, inspecting them to make sure they haven’t weathered and been compromised. If you note damage, replace the straps with those supplied by the manufacturer or swap them out with ratchets or other cinch straps.

Anyone who knows me also knows I’m a nut about safety lines, and all my stands have one. While these are pretty heavy duty and can take years of weather without failing, I like to inspect the line for signs of rot or fraying. If I spot trouble areas, I’ll replace the entire setup, though I’ve noticed if anything is going to wear on a life line it’s usually the prusik knot. I carry a few pre-tied loops with me and replace any prusiks that are looking feeble.

The growing popularity of permanent blinds and shooting houses has put another chore on my preseason checklist: making sure these structures are hunt-ready. This will be a bigger chore than normal this summer, as several straight-line wind events have toppled or otherwise damaged some platforms. So I’ll be assembling a small carpentry crew to rebuild or repair the normally maintenance-free portion of a permanent blind.

But even in a normal year, it’s part of my checklist to inspect the interior of every blind to make sure pests haven’t invaded the space. Windows and doors tend to blow open in the off season, and I’ve had wasps, bees, owls, and raccoons jump on the opportunity to set up housekeeping in a blind. Opening day, I’ve learned, is not the time to realize that a blind is infested with wasps. Deal with these homesteaders now, and hunting season will be much more pleasant.

This is also a good time to check doors and windows for annoying squeaks and groans by hitting them with a light machine oil or WD-40 or vegetable oil. Again, you don’t want to learn that a window squeaks while you’re slowly swinging it open it to take a shot at a first-day bow buck. I also pull all the carpets from shooting houses at the end of the season, and now is a good time to bring them back or replace them with new ones.

I always like being as silent as possible in the final approach to a stand or blind, and the key to this is a narrow path I rake for the last several yards to the base of the tree. On a field edge setup, the path is invariably shorter, but on stands located in the timber, they tend to be long and sometimes winding. This is the perfect time to clear or re-route a path by clipping brush and removing sticks and rocks to create a silent sneaking trail. Brush clippers and/or a handsaw, as well as a steel rake, are the only tools required to create such a path and, while falling leaves will cover the route as fall progresses, removing them is a quick and largely-silent process once the original path is created. I also like to put up any reflective tacks or trail markers now.

It’s also a good idea to crawl up in the stand and make sure new limbs or other fresh growth has not clogged any of your shooting lanes. I tend to like a fairly broad shooting lane, especially when I hang a set long before hunting season. But no matter how well-cleared my originals are, nearby trees and bushes seem intent to push new limbs and leaves into my openings, so I keep my pole saw in the truck to clip the offenders back now—so that no branch will get in my way of filling a tag come bow season.