An impressive rack from an ice-age elk is for sale. The antlers, still attached to the skull, span more than... 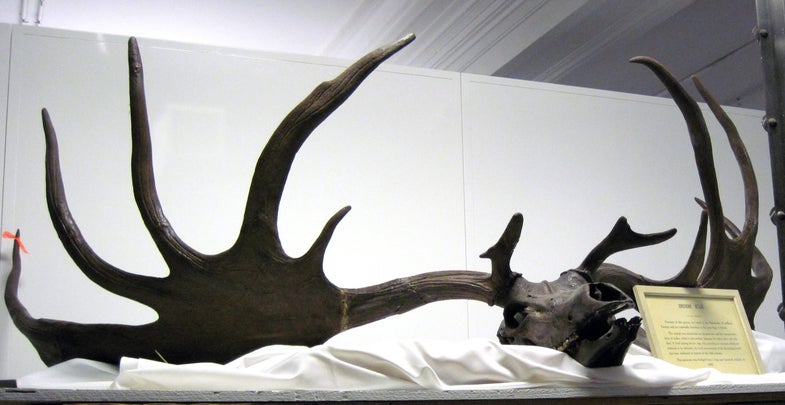 The Irish elk has been extinct for 11,000 years. Their massive, fossilized racks are a rare find, and are usually discovered in bogs in Ireland, giving them their name. Courtesy of Flickr/James St. John
SHARE

An impressive rack from an ice-age elk is for sale. The antlers, still attached to the skull, span more than 10 feet and date back at least 11,000 years. They were discovered in a bog and have been displayed in a private hunting lodge in New Zealand.

“It’s something that we’re very excited about having in the sale,” Andrew Grigg of Cordy’s fine art and antique appraisers told the New Zealand Herald. “We knew we had something that was a rare find for this country.”

It’s a rare find for the world, actually. The antlers come from an Irish elk, which went extinct about 11,000 years ago. According to the University of California Museum of Paleontology, the elk stood 7 feet tall and populated areas beyond present-day Ireland. The animal’s remains have been found in Europe, Asia, and Africa, but most of the well-preserved fossils have been found in Ireland bogs.

Only a few people have seen the rack, which is ready for auction in New Zealand, over the past 100 years. The sizable mount hung in Major Robert Adams Wilson’s master bedroom in his lodge on the North Island of New Zealand. When Wilson died, in 1964, the antlers went to his son, Murray, who gave them to Malcolm McIntosh two years ago. McIntosh, who camped on Wilson’s land as a boy scout, initiated the auction.

The massive piece is expected to sell for thousands at the auction on November 8.