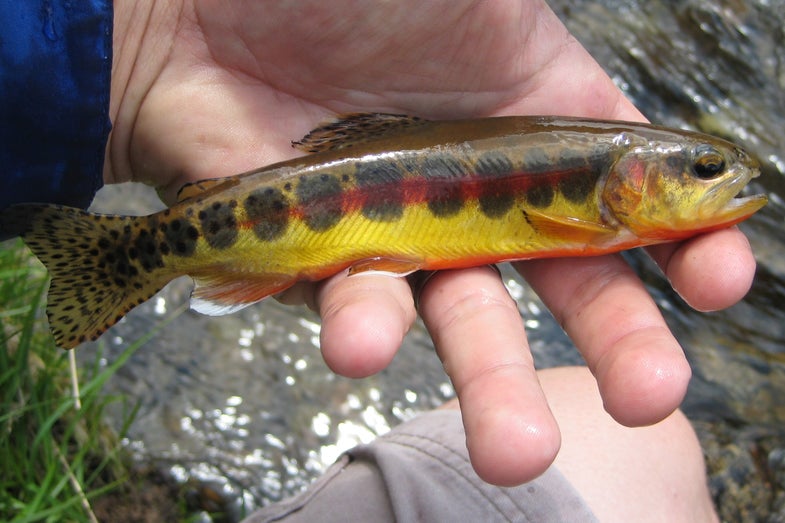 In California, state biologists recently rescued 52 golden trout from Volcanic Creek in the Golden Trout Wilderness. According to KCRA.com, scientists determined that the remote creek, which is above 10,000 feet of elevation, was no longer a viable habitat.

Tracy Purpuro, a district fisheries biologist for California’s Department of Fish and Wildlife, said creek conditions put that population of golden trout, which is California’s state fish, in risk of elimination.

“We’ve been monitoring this for three years now, and populations have steadily declined and habitat has steadily shrunk to the point where we think we’re at a threshold where we might suffer some genetic damage if it gets worse,” said Purpuro.

Vehicles are prohibited in the Golden Trout Wilderness, so the biologists had to pack the trout out on mules so they could be transported to the Nimbus Fish Hatchery for safekeeping. The fish were transported in chilled canisters complete with battery-powered aerators for the 15-mile journey through the wilderness area to a vehicle that would take them to the hatchery.

“The logistics of this is tough,” said Purpuro. “It’s a remote location. We work from a base camp here next to Golden Trout Creek that is a good 15 miles from the trailhead, and then from this camp to the project site is about four miles, roughly a three-hour hike over another small pass.”

Ultimately, the plan is to release the fish when the environment is better suited for their survival. In the meantime, scientists plan to collect DNA samples while they live at the hatchery.

In 2011, the U.S. Fish and Wildlife Service announced that the golden trout would not be protected under the Endangered Species Act based on the results of a 10-year review. According to spokeswoman Sarah Swenty, the USFW ruled that “conservation measures throughout the trout’s historic range have done much to protect the species.

Largely because of those measures, the service determined that the intensity of threats does not indicate the species is endangered, or likely to become so in the foreseeable future.”