10 Guns Worth Handing Down to Family and Friends 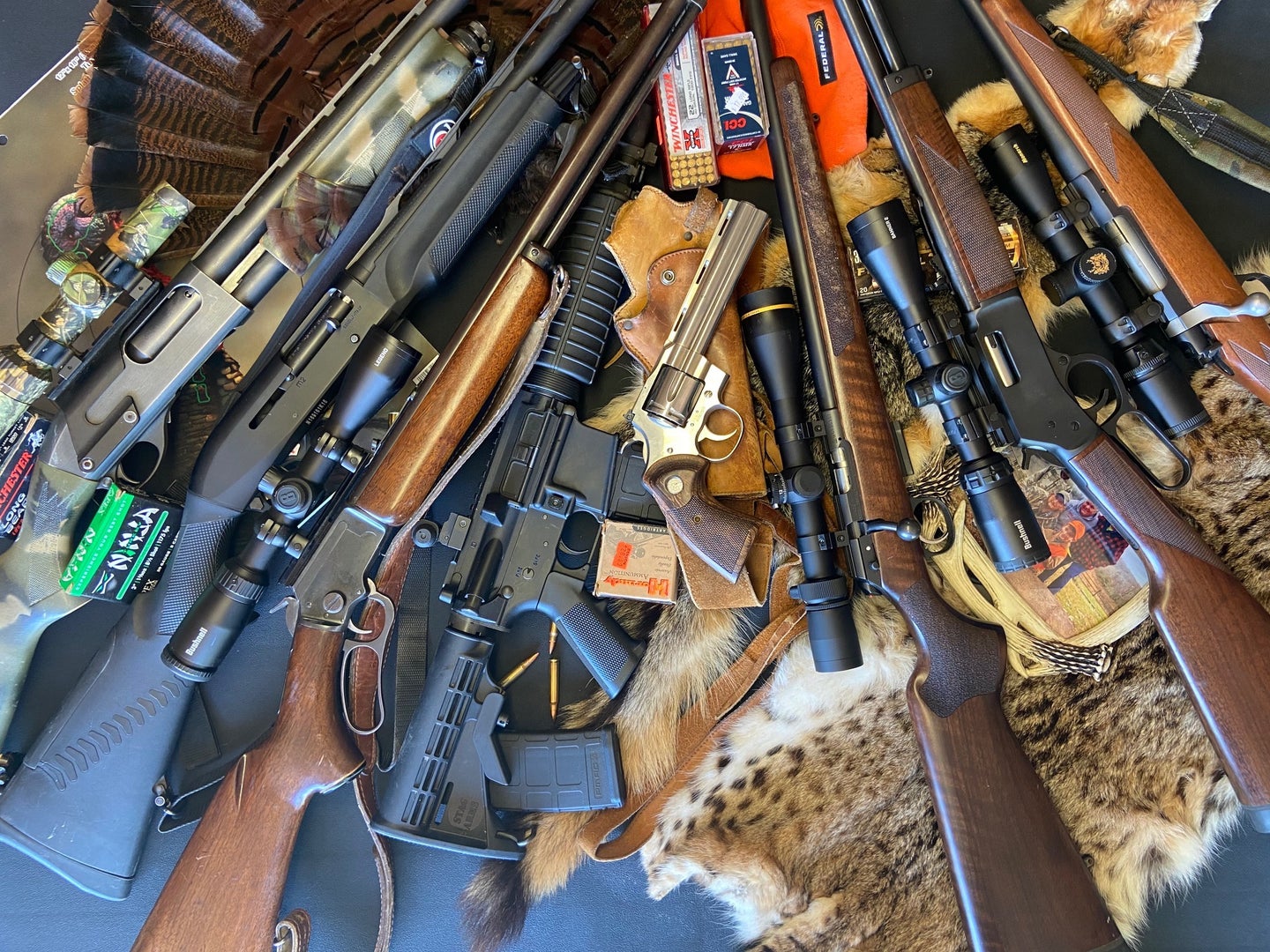 A collection of some of the author's favorite guns.
SHARE

I’ve never been able to call myself a “gun writer” with a straight face, because, to me, most guns have all the sentimental value of hammers and channel locks. I’ve always been more interested in hunting techniques and the crusty characters in camp than trendy rifles and calibers.

But make no mistake: I’m seldom anywhere without a firearm within reach, and I take a shot at something or another more days than not. It’s actually easy to overlook your guns when they’re ingrained in everyday life. I have some that I’m not attached to at all, and I’d maybe even sell for good money. But I have others that aren’t leaving—and I can’t stand the thought of them sitting unused if I weren’t here.

So listed here, in no particular order, are the 10 guns I own right now, and that I’ll hand down one of these days.

I never thought I’d replace the bolt-action Marlin .22 that was my go-to squirrel gun for almost 30 years—but I did just that a few falls ago, when I received a CZ 457 Varminter in .17 HMR on loan for a review. Introduced in 2019, the 457 is, in my eyes, the best rimfire rifle for the money. The Varminter version is classy, with a heavy bull barrel and Turkish walnut stock, but that’s not why I like it. Head-shooting squirrels at 100 yards grew on me. Simply put, this is the most accurate rifle that I’ve ever shot, period. It sports an adjustable trigger that I’ve never had to touch, because it’s not good to mess with things that are already working perfectly.

It was also the rifle that my going-on-7-year-old son, Anse, first associated with me when I began taking him squirrel hunting. One day he dubbed it my “Big Blister” gun, because it “blisters those squirrels in the head.” When I told Anse I was just borrowing Big Blister and had to send it back, he cried as if I’d thrown his toys off a bridge. And so, since I like to spoil the boy, I sent CZ a check and kept it instead.

I’ve always had a soft spot for big double-action revolvers. Since I grew up in the ’90s, I have a soft spot for good action movies, too. Few big wheelguns have had more cameos on screen than the Colt Python, and not a one of them has a better name. That piqued my interest in this classic revolver from a young age.

But I’ll remember the Python that’s actually in my safe for something different: It was the gun of 2020. That was the year Colt reintroduced the Python at the SHOT Show after a 14-year hiatus. It was big news up until about March when, depending on which news outlet you were watching, the world was coming to an end.

I got a T&E sample Python to review just after the Covid pandemic began, and I ended up buying it. A big American-made revolver seems a befitting sidearm in a world gone to hell, and that my Colt is the most accurate handgun I own is almost a bonus.

I have a few AR-style rifles in my safe, and each is as indistinct as the next. I’ve hunted with ARs a bit for deer, hogs, predators, and prairie dogs. My wife, Michelle, killed a Colorado mountain lion with one. Though the guns are always plenty accurate, they’re not my thing in the woods. Their pistol grips and magazines are in the way, and they’re a little underpowered for my liking. I’ve hunted with AR-10s, too, which solve the power problem—but they’re still cumbersome, and heavy to boot. But that’s OK, because I’ve got plenty of other hunting guns. My ARs are fun guns for the range.

Shortly after Michelle and I got married, I bought this rifle—straight off the shelf of a gun shop in Paducah, Kentucky. We both hunt with it. It’s a .308, and I topped it with a 2.5-7x power scope. Rifle experts will tell you there’s no reason for a 16.5-inch barrel in a caliber like .308. And maybe they’re right. This gun is loud and it kicks, and it’ll never win a benchrest competition.

But I’ve never had a handier deer rifle. The first buck I shot with it was a 161-inch Missouri monster with a drop tine. I was still-hunting the edge of a thicket, and I shot the deer facing me at about 40 yards. He’s still my biggest whitetail to this day, and situations like that are where this rifle excels. I have other rifles that are more accurate and kick less—but come November, this is the deer rifle we hunt with the most.

Speaking of recoil, this gun has blacked Michelle’s eye—twice. And speaking of Michelle, this gun is hers, not mine. But since we share a checking account, I’ll put it on the list.

Old Trusty is a hand-me-down 870 Express that was Michelle’s dad’s turkey gun. He gave it to her when she started hunting, and she’s since used it to kill just about every one of her 40-plus gobblers. Michelle likes a scope on her turkey gun—a source of contention between us for years—and Old Trusty kicks so hard that the lenses in its original scope collapsed. The Weaver I used to replace it is much better, but also longer, and so it blacks eyes if your cheek placement isn’t just perfect. With the over-receiver mount, plus the rings and scope, the gun is heavy, and it’s perhaps the ugliest one in the safe. But also one of the most cherished.

In contrast to Old Trusty is the sleek 20-gauge I’ve come to prefer as my own turkey gun. It weighs less than 6 pounds, and using TSS and a Carlson’s turkey tube, it is pure poison on gobblers. I flattened one at 40 yards with it this spring, and it simply crushed him.

This is the gun that changed my outlook on sub-gauges in the turkey woods, and I doubt I’ll ever go back to a 12 as my primary gobbler gun. Not that a 12 doesn’t work, but because I don’t want to haul around the extra weight. Outside of the spring woods, I love my M2 on the dove field, while rabbit hunting, shooting wood ducks, and for just about everything else. It’s a quintessential utilitarian hunting gun that was a touch expensive, but worth every penny. It’s perhaps the shotgun I use more than any other in the safe, too.

Most kids start their shooting careers with a .22 rifle, or maybe a .410. I started mine with a muzzleloader. This pint-sized sidelock, still a .50-caliber, was waiting under the Christmas tree for me when I was 9 years old. I killed my first deer with it—a 60-pound doe—the next fall, using a patched round ball and 70 grains of FFG black powder.

The laminated stock is pretty, and definitely a throwback to the ’90s. The barrel’s 1:20 twist, which was ahead of its time for percussion rifles of the day, handles saboted and conical bullets equally well, but it also shoots great with round balls. As a first gun, this muzzleloader taught me the importance of precisely measuring components and of firearm maintenance. Those are lessons that can’t be replaced.

The more I write about it, the more I think I need to bring it out of retirement and take it hunting this fall.

The ideal truck gun should be multipurpose. It’s a stand-in deer rifle in a pinch, and also good for popping surprise coyotes out on the farm. It should be quick handling and compact, and it doesn’t hurt anything if it has some self-defense utility, too. It is, after all, the gun in your truck.

All together, a lever-action rifle chambered for a magnum revolver cartridge makes good sense. Mine is a Henry Big Boy .357 Magnum. It wears a 3-9×40 scope, and it’s a hell of a deer gun to 100 yards. (I killed a pronghorn with it last fall, too, and Anse used it to bag his first two whitetails.) It has virtually no recoil and holds 10 rounds of ammunition without an obnoxious magazine sticking out of the receiver. I mentioned my ARs above, and for purely defending the homestead, I’d opt for one of them. But for an all-purpose rifle, I’d go with this instead—especially if I could put that Python on my hip, too.

I do not like the game of golf even a little bit, but I did like being a greens keeper, which was the job I had 20 years ago—before I sold my first outdoor article. I only bring it up because I spent the entirety of my first paycheck from the course on my first good centerfire pistol: a used Beretta 92FS.

This model has always been a controversial handgun. Under the name of the M9, it was the standard-issue pistol of the U.S. Armed Forces that replaced the Colt 1911 .45 ACP back in the ’80s. That an Italian 9mm replaced an American .45 was bound to get a lukewarm reception, regardless of how many of the criticisms were warranted. Probably some were, and some weren’t—but that’s not up to me to say, because I wasn’t in the service.

What I can say is that I’ve put thousands of rounds through my Beretta, with all sorts of ammunition, from premium +P hollowpoints to steel-cased surplus junk. It’s never malfunctioned with any ammo of any sort, and it’s always hit where I aimed it. It’s been a constant companion and comfort on journeys near and far, and a pistol I’d grab for bumps in the night. Want a smaller, lighter 9mm? Take your pick, because that describes just about every modern 9 made. But I liked my 92 when I bought it, and I still like it today.

I own more guns chambered for .22 Long Rifle than anything else, but only one of them makes this list: the Golden 39-A that I picked up from the used rack of a local gun shop last winter. I took it to the squirrel woods that day and killed the very first bushytail that I shot at with it, using open sights. I killed the second one, too, and thought perhaps the gun was magic—but I missed the third and fourth ones, and so I put a scope on it later that week. I’ve yet to dig into a full squirrel season with it, but I’m looking forward to this fall.

This is a gun to hand down simply because I might never see another one like it for sale. The 39-A is maybe the best .22 rifle of all time, and it’s certainly one of the most recognized. It was Annie Oakley’s rifle, after all. Mine has a JM (John Marlin) stamped barrel and from what I’ve been able to research, was built in 1953—30 years before I was born. The bluing is fair at best, but there’s no rust on the gun, and it’s still tight, plus, it’ll put five rounds in a quarter at 25 yards.

I haven’t had it for long—but how could I even think of selling something like that?