9mm Vs. 10mm: Which Handgun Should You Pack?

Sure the 10mm is more powerful. But for the majority of shooters, a 9mm handgun makes more sense 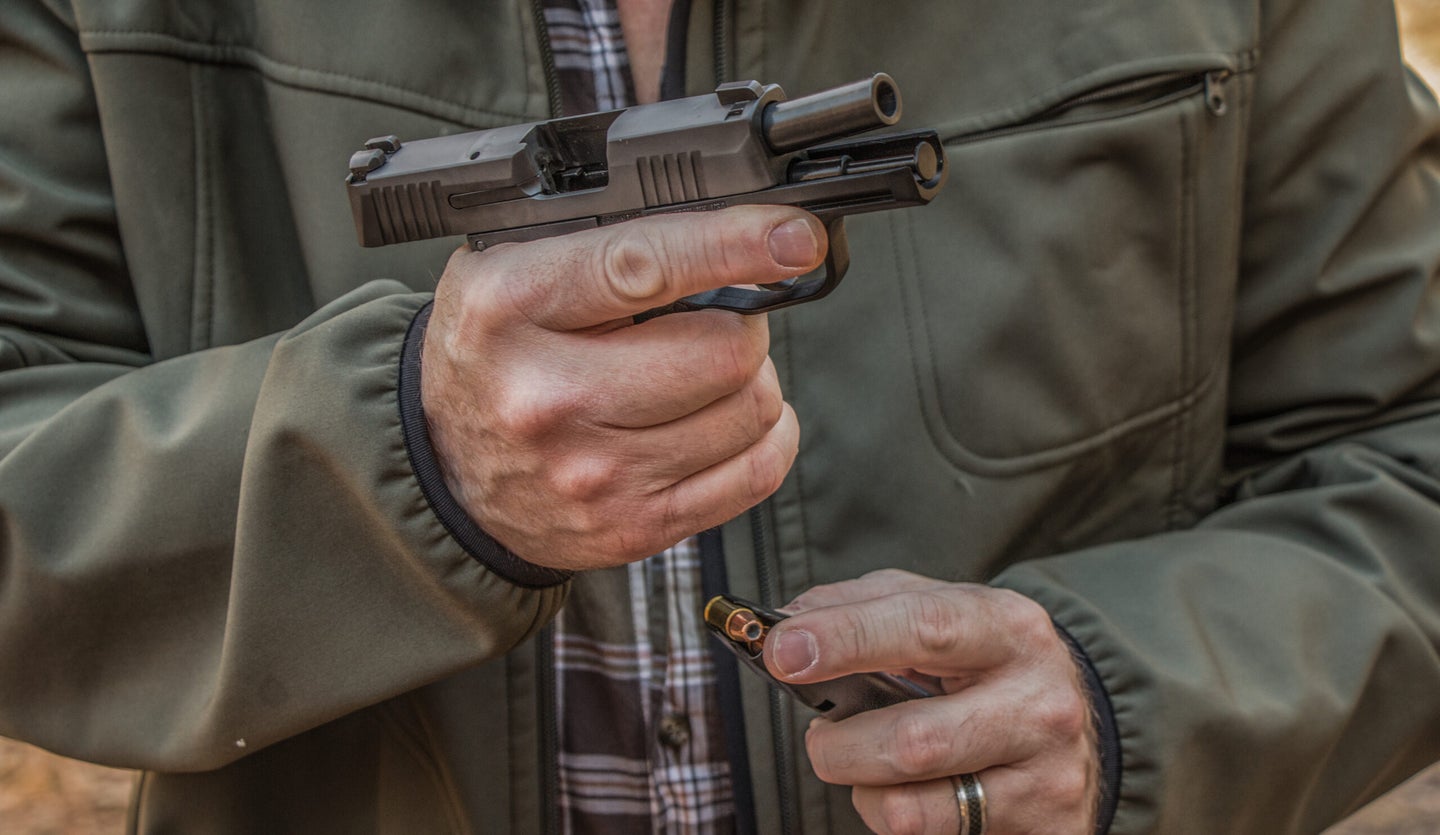 It may seem silly to compare the 9mm to the 10mm. Even if your ballistics knowledge is minimal, you probably know the 10mm is more powerful. The best 9mm loads will push a 124-grain bullet to about 1165 fps from a common duty- or similar-sized handgun. That equates to about 374 foot-pounds of energy. The best 10mm handgun loads will drive a 180-grain bullet to around 1250 fps and generate more than 600 foot-pounds of energy. So why bother with the comparison?

Well, first off, our research indicates that “9mm or 10mm?” is one of the most common questions shooters are asking these days. These may be largely new shooters, but that’s a good thing, and new shooters really need to get the answer right. But even for more experienced handgun shooters, the question is not a total no-brainer.

Why? Partly because power is not everything, and mostly because not everyone uses handguns for the same reasons. Some people carry a handgun to protect themselves from other people. Some only own a handgun for recreational purposes. Others might keep a handgun at home just in case it’s needed for self-defense. Finally, some only intend to use their handgun for hunting. Application matters. You wouldn’t want to drive a nail with a screwdriver or shoot an elephant with a .22 LR. This means that the best way to make the comparison is to consider what the handgun will be used for. So, let’s break it down.

9mm Vs. 10mm for Concealed Carry

Recoil and terminal performance are important for concealed carry too. The 10mm G29 recoils with almost 10 foot-pounds of energy. The 9mm G26 has about 40 percent less recoil, making it much more comfortable to shoot. This allows for better accuracy and faster follow-up shots. Regarding terminal performance, the 10mm will generally damage more tissue. But, when you consider carry comfort and shootability, the 9mm is probably the best choice for all but the most experienced shooters. There’s a reason most police departments issue 9mm handguns.

9mm Vs. 10mm for Recreational Shooting

For recreational purposes, you don’t want a handgun with heavy recoil or one for which ammunition is expensive. Both will make your range time less enjoyable. At even the best pandemic prices, a 50-round box of 9mm ammo will cost you about 70 cents per round, whereas 10mm rounds go for about 85 cents each. That’s not a tremendous difference, but it adds up; for a 1,000 rounds, it’s a $150, and a 9mm will ring steel just as well as a 10mm.

Home defense is similar to concealed carry, but handgun size and weight are not as important. A home defense handgun will spend most of its life in a safe or lock box. However, a home defense handgun might need to be used by any member of a household. Here again, the shootability of the 9mm makes it a better choice where a family is concerned.

Recoil while hunting is not so important, partly because repetitive follow-up shots are not often used; it’s generally a one-shot proposition. For smallish critters, the difference between the 9mm and 10mm is irrelevant. With larger game like feral hogs, deer, and maybe even black bear, the 10mm is clearly the better choice. Its heavier bullets will be better at breaking bones and the increased tissue destruction can help deliver a more humane kill.

9mm Vs. 10mm for Bear Protection

Along the same lines comes defense from four-legged predators such as bears and maybe mountain lions. If you must shoot in one of these instances, it will likely be a last resort, the shot will be close, and you might only get one trigger press. The edge here goes to the 10mm for the same reasons that it’s a better option for big-game hunting. Can you stop a big bear with a 9mm? Yep, and it’s been done. But I’ll take a 10, thank you very much, and you should too.

The Overall Winner Is: 9mm

The 9mm is simply a better choice for most people, in most situations. That’s no knock on the 10. Introduced in 1983, the 10mm was originally quite popular, but interest began to fade with the introduction of the .40 S&W in 1990. The .40 S&W was a 9mm-like version of the 10mm, in that it offered some of the 10’s power but was easier to shoot. Ironically, with the FBI and other law enforcement agencies’ transition back to the 9mm, 10mm popularity has been renewed. It’s a fantastic cartridge for just about anything you want to do with a handgun if you can handle it well, but its recoil and weight make it less than optimum for most shooters.

Unless your primary reason for buying a handgun is for hunting or defense against bears, overall, the 9mm is the better option. It’s easier to carry concealed, better for recreational shooting, can generally be managed by most family members, and with the right ammo, it will cleanly kill a mud-caked feral hog or a 10-point buck—and even stop a bear in a pinch.