Thinking About Jumping on the 20-Gauge Waterfowl Gun Bandwagon? Read This First

Our shotguns editor participated in the latest study of 20- versus 12-gauge guns for waterfowl. The results will surprise you 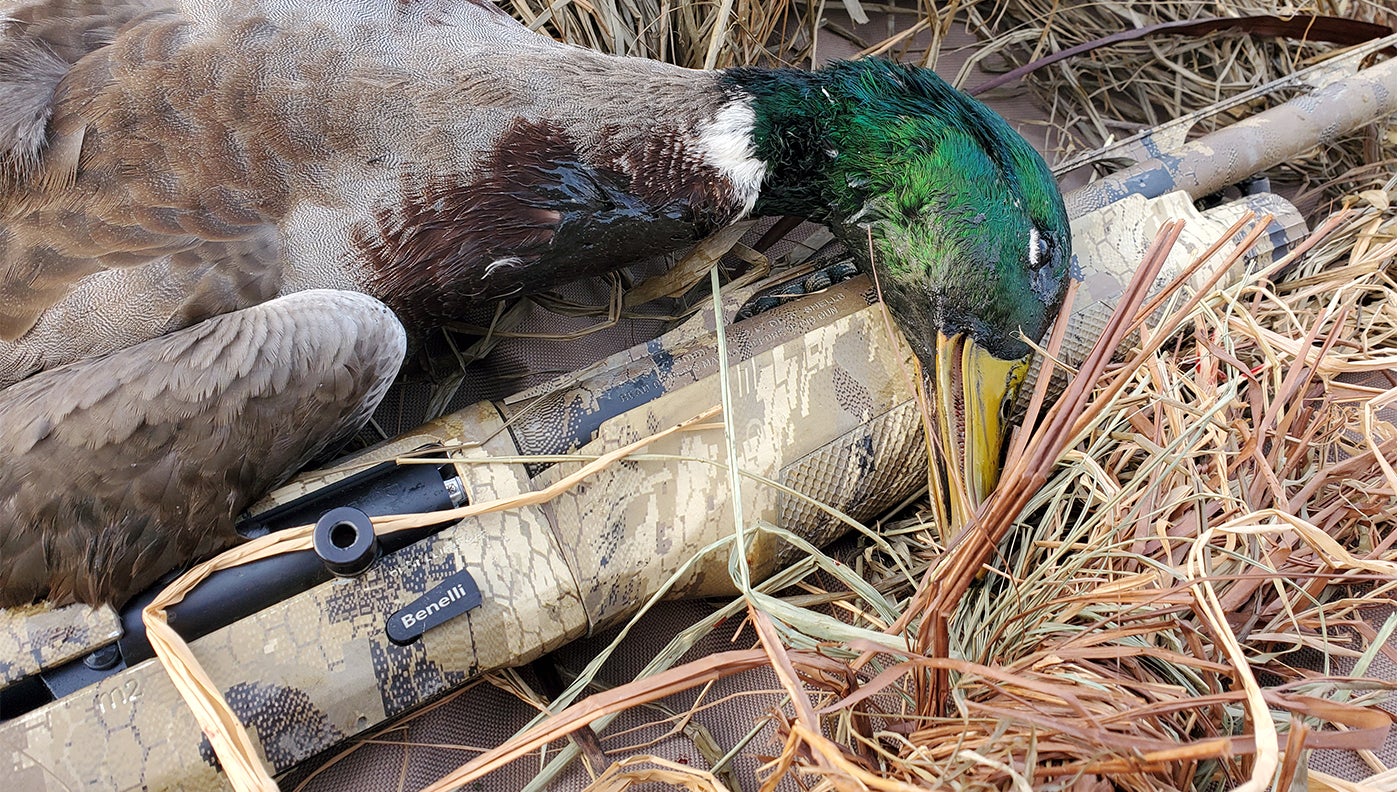 A 20-gauge is more than capable on decoying ducks, but it's not the equal of a 12. Phil Bourjaily
SHARE

The 20-gauge is the trendy gun among waterfowlers right now, and it’s easy to understand why. It’s light, it’s supposedly fast-handling, it’s softer-shooting with the right loads, and it’s effective enough on ducks over decoys. In some places, it is practically a must-have gun, as a number of duck clubs and private landowners require the use of a 20-gauge or smaller shotgun, believing that the quieter reports of these guns help hold ducks on their property.

In June, I traveled to the Max McGraw Wildlife Foundation in Dundee, Illinois, near Chicago, to participate in a study measuring the relative noise of various waterfowl loads in the field. We did some patterning and shooting as well. You can read detailed results in their study here. In the process of observing and helping out, I learned more about why you should, and shouldn’t, get on the 20-gauge waterfowl gun bandwagon. Here are the questions I went in with, and the answers I came away with.

The trend among duck clubs to require 20-gauge shotguns started in California. The theory is that the quieter report of the 20 doesn’t cause as much disturbance to ducks as the louder blast of a 12. That logic always seemed suspect to me, and at McGraw, we learned the truth—that 20s aren’t necessarily quieter than 12s.

We shot 20 different loads, from 10-gauge and 3 ½-inch 12 down to 28-gauge, while a scientist from GZA GeoEnvironmental, set up 30 yards out and 90-degrees from the muzzle, measured each report. When we compared the sound levels of 2 ¾-  and 3-inch 12 and 20-gauges, we found a difference of 4dB between the loudest 12 and the quietest 20.  Most were closer in noise level than 4 dB, and thus imperceptible to the human ear (any increase under 3dB is not detectable to humans, and human and duck hearing is not that far apart). There was overlap, too: Some 20-gauge loads were actually slightly louder than the quietest 12-gauges.

There’s no guarantee any given 20-gauge load is quieter than a 12-gauge, and even when the 12 is louder, the difference is very slight out where the ducks are. In the end, the idea that the quieter report of a 20 will keep more ducks on your property is flawed, at best.

Q: Is the 20-gauge is enough gun for ducks over decoys?

Pattern tests conducted with the same loads from the noise experiment proved, to no one’s surprise, that a 12-gauge puts more hits on an 18-inch target circle at 35 yards than a 20- or a 28-gauge does. To come even close to the level of a basic 3-inch 12-gauge steel load (Remington Nitro Steel, 1 1/4-ounce, 1400 fps 3 shot), you have to spend twice as much money on premium sub-gauge ammo. The best-performing 20-gauge shell in the test was a 3-inch, 1 ¼-ounce, 1350 fps load of HeviXII 6 shot. It averaged 28 hits in the 18-inch circle versus 40 hits for the 12-gauge Remington steel load. The steel 3-shot pellets retained slightly more energy than the HeviXII 6 shot at that range, too. In other words, a 12-gauge loaded with good, basic steel outperforms a 20 with top-quality, expensive premium ammo.

The 20-gauge is enough for decoying ducks and then some. The pattern tests show it, and I have shot enough close-range decoying ducks and geese with bismuth 3s to be convinced. It is not the equal of the 12, however, despite what 20-gauge fans are saying these days. A 12 puts significantly more pellets on target, hits harder, and gives you a few extra yards of effective range, which can matter when you have to put a second shot in to a lightly-hit, flaring bird or you underestimate distance and take a longer shot.

Q: Is the 20-gauge faster-handling and more shootable than a 12-gauge?

After I left, the people at McGraw set up a shooting test of 10 35-yard crossers on their sporting-clays course, and they asked shooters to try to hit them with a 12 and then a 20. To be honest, I had expected the 12-gauge guns to far outperform 20-gauges in this this test, and they didn’t. A 35-yard crosser is a long shot for most people, and it turns out to be equally hard for people whether they are shooting a 12-gauge or a 20-guage. Test-subjects performed about the same with a 7-pound, 4-ounce 12 as they did with a 6-pound 20, although they struggled with a 5-pound, 10-ounce 20-gauge. A light gun can swing as well as a heavier gun for many, but, as the test showed, a gun can be too light. Choose your smallbore guns wisely.

As to the 20-gauge being faster-handling than a 12, it’s not. The McGraw study refers to a test I conducted several years ago, when I timed shooters trying to hit a going-away target as fast as they could. We used three guns: a 6 ¾ pound 20-gauge, a 7 3/4-pound 12-gauge, and the same 12 with 15 ounces of weight added to the butt and the mag cap. Shooters using the weighted 12 could mount the gun and break a target at an average time of .77 seconds. With the 20, it took them an average of .98 seconds to get on target and make a good shot. Not only was the heavy 12 faster, it was easier to shoot. Shooters hit 72 percent of their shots with the 12, and 63 percent with the 20.

In the hands of average shooters, a 20-gauge can swing as well as a 12-gauge on crossers. If you want to be fast to the target, and hit what you’re shooting at, however, a 12-gauge does a better job. The caveat here is that if you are too small or lacking in strength to handle the 12-gauge, the 20-gauge is, of course, a better choice.

People often choose 20s because they believe that the smaller-bore gun will kick less than a 12-gauge. And it will—if you shoot lighter loads. But, in ballistics there is no free lunch. If you want to boost your 20’s performance as close to 12-gauge levels as possible, you’ll pay a price in recoil. Take the HeviXII 1 ¼-ounce load that performed well in the McGraw test, for instance. If you shoot it out of a light, 6-pound gun, it will actually generate a couple more foot/pounds of recoil energy than the 1 1/4-ounce, 1400 fps Remington Nitro Steel load in a 7-pound, 4-ounce 12-gauge gun, which has more weight to soak up recoil.

If it is less recoil you are after, choose light, 1-ounce or 7/8-ounce load for your 20-gauge. If you load it with faster or heavier payloads, it will kick as much or more than many 12-gauge gun-and-load combinations.

Q: So, should you shoot a 20-gauge for waterfowl?

Let’s review: A 20-gauge isn’t as deadly as a 12. It is not faster, nor easier to hit with. It does not necessarily kick less. It is not much quieter. It does has two advantages, however: The first is that might be a better choice for younger and/or smaller shooters who can’t handle and shoot a heavier 12 as effectively. Second, which is the 20s biggest advantage, is that it might put a smile on your face.

For most shooters, the 12-gauge is clearly the better waterfowl gun from a practical standpoint. But even I, a hunter who prefers 12s for waterfowl, found that toting a 20-gauge gun to the blind and shooting it is just kind of, well, fun. That’s a fine reason to shoot a 20-gauge, and a lot of hunters right now feel like shooting a smallbore makes them happy. If that’s you, and you shoot your 20-gauge well, who am I to tell you not to shoot it? If you want to bag more ducks and geese, shoot a 12. But if shooting a 20-gauge makes waterfowling more enjoyable for you, learn the gun’s limitations and have fun hunting with it.