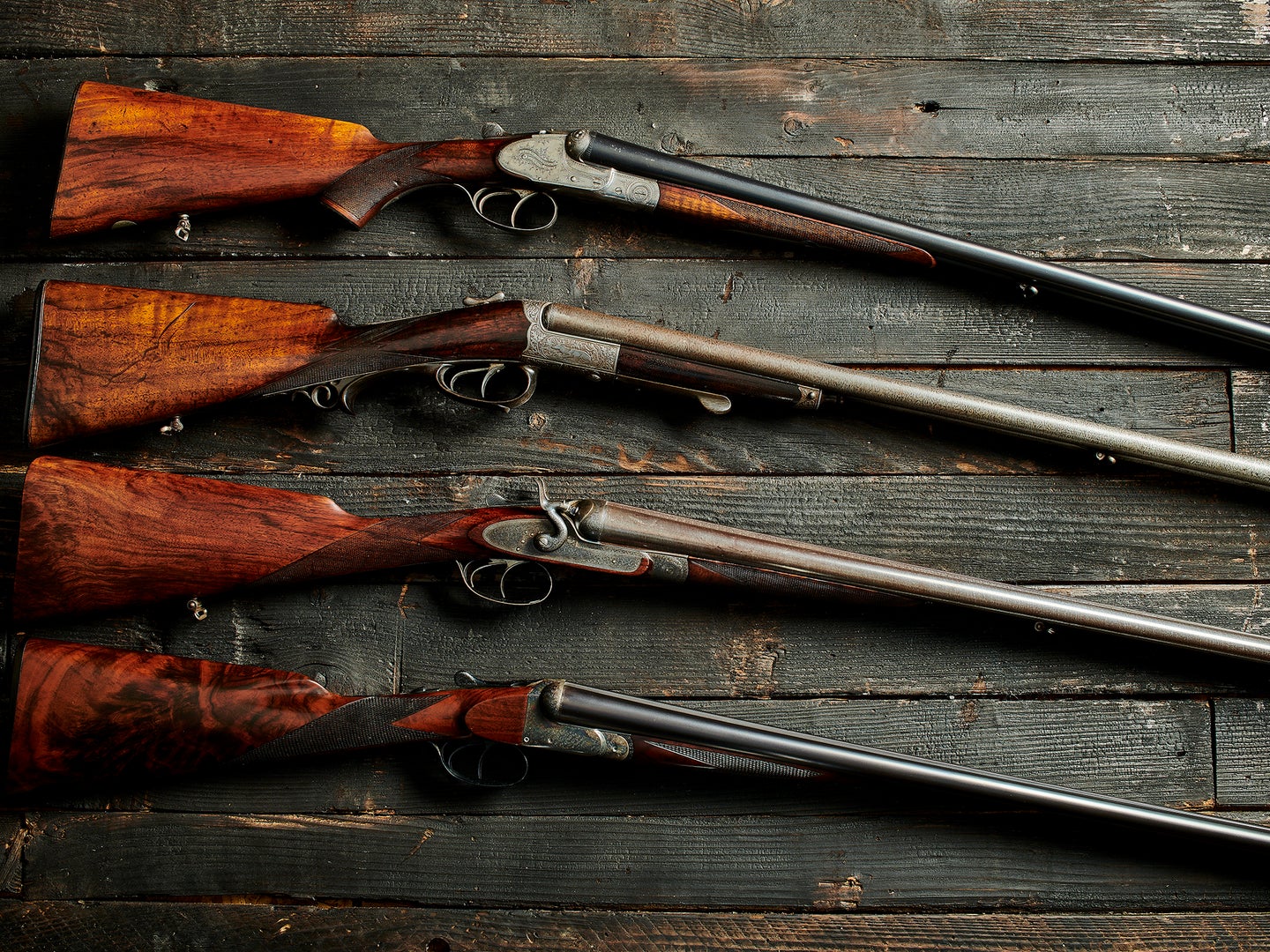 Take a tour of Mike Jensen's stunning collection of classic side-by-side shotguns from the Golden Age of doubles. Your next field gun could be here

FORTY YEARS AGO, then-college student Mike Jensen walked up to the counter of the Olathe Gun Shop in Olathe, Kansas, curious to learn what his shotgun was worth. He’d bought the L.C. Smith double for $150 from a friend just before he’d left home in Boone, Iowa, for nearby Nazarene College. “I handed the gun to the owner,” recalls Jensen, “He wouldn’t give it back to me. He kept offering me more and more money for it.” The Elsie turned out to be a Specialty Grade .410, worth $20,000 or so today. Yet all that money couldn’t make Jensen sell.

“That gun intrigued me,” he says. “It was built by hand. It took hours to file the action, to lay the ribs, finish the wood, and to engrave the metal. That first vintage double turned into two, then three, then more, until eventually, Jensen owned nearly 1,000. Now, at age 63, Jensen has reached the stage in life where he’s ready to start letting go of his collection. He leases space in the Olathe Gun Shop where, at any given time, you can see hundreds his guns for sale. If you’re a traditional-minded bird hunter, you need to pay M&M Classic Doubles a visit.

The racks in Jensen’s part of the store hold guns with names both famous and forgotten, arranged by country of origin. You’ll find anything your heart desires, so long as your heart desires a double gun. “Nothing against them, but O/Us are too modern,” says Jensen. He believes the shotgun was perfected in the late 19th century, and his collection covers the Golden Age of doubles, from the invention of the boxlock in 1875 to World War II.

Jensen has a point when he says shotguns were perfected 140 years ago. Nothing about a modern double gun—except maybe choke tubes—would be unfamiliar to William Anson and John Deeley, the Westley Richards employees who invented the hammerless boxlock action in 1875. Westley Richards also invented the top lever, with which 99 percent of break actions open and close. Smokeless powder and fluid steel barrels came along about a decade later and the Golden Age lasted until the one-two punch of the Great Depression and World War II brought it to an end.

A Golden Age double gun still makes a great hunting gun today, and, unlike almost every modern gun, including some very high-end pieces, you know it was fit, finished, and checkered by hand in an era when laser-engraving and checkering and C-n-C machines were completely unknown.

Jensen learned to love these classic side-by-sides as field guns while hunting Kansas pheasants. “Old doubles are deadly when you use them with the ammunition they were designed to shoot,” he says. “The British knew what they were doing, and they had it all figured out by 1880. They built trim, light guns intended for light loads and slow powders that patterned beautifully.”

Jensen used to hunt with a 12-gauge semiauto and kept going to heavier and heavier loads because he wasn’t killing birds cleanly, he says. “Then I switched to a 20-gauge Dickson double, shooting 2½-inch No. 6 shot loads made by RST. I could kill pheasants dead at 45 yards with it, because it patterned so much better than my modern gun. I’d rather hit a bird with 10 slow pellets than with one or two very fast ones.”

Jensen’s collection spans both the era of Damascus barreled guns (made by twisting iron and steel ribbons together and welding them) and fluid steel guns. Fluid steel was invented in 1880, and you’ll find both types of barrels in late 19th century and early 20th century shotguns. Despite what you’ve heard to the contrary, Jensen will tell you that Damascus guns in the right condition are totally safe to shoot with the right low-pressure smokeless ammunition, and he has all ten fingers to prove it. The problem with Damascus barrels isn’t their strength, it’s that they are very old and were shot with blackpowder ammunition. Blackpowder attracts moisture, making barrels vulnerable to rust and extreme pitting if they weren’t cared for. Jensen says if the barrels are in good condition, with a wall thickness of .025 or more, they are fine to shoot with low-pressure smokeless loads. You’ll want a gunsmith to check the gun out, but twist barrels are nothing to be afraid of.

Because so many people are leery of Damascus guns, they can be terrific deals. “I went to an estate auction once,” says Jensen, “and they had an old Parker worth $4,000. The auctioneer held it up and said “This old gun has Damascus barrels, it will blow up in your face if you try to shoot it. All you can do with it is hang it on the wall.” After he said that, no one wanted that gun. I bought it for $265, then stopped to see the widow after the sale and gave her an extra $1000, and I still felt kind of bad about it.”

As fluid steel became popular, many gunmakers sleeved guns, cutting off the Damascus barrels ahead of the chambers and fitting fluid steel barrels. Even if the work was done by the maker, and it comes with factory documentation, a sleeved gun loses a great deal of its value. Sleeved guns are a bargain, and there’s nothing wrong with them as hunting guns.

What Makes These Doubles Special Is That You Can Afford Them

“Affordable” means different things to different folks, but a regular hunter who’s determined to own a classic double and is willing to save a few years for it could buy almost any one of Jensen’s guns. By and large, he has steered clear of the very high-end guns as he assembled his collection. “I couldn’t hunt with a $50,000 Purdey. I’d feel that if I cracked the stock, I’d lose a chunk of my kid’s inheritance. I was always interested in practical guns, ones you could take to into the field and really put to use,” he says. The majority of Jensens doubles sell between $2,000 and $5,000. No, that’s not nothing, but to get a double of equal craftsmanship today would cost tens of thousands. Jensen’s offerings are bargains by any measure.

It may come as a surprise that many of Jensen’s customers aren’t aging collectors, but younger hunters in their 30s and 40s, with the millennial’s taste for the artisanal and the handmade. What’s more, unlike previous generations of collectors who were fanatics about original condition, these new gun buyers want a good-looking hunting gun, and they don’t care if it’s been refurbished. You’ll see guns in original condition at M&M, but you’ll also see guns that Jensen found as diamonds in the rough and then had recheckered and/or reblued by experts.

Some collectors may take offense, but many won’t, Jensen points out. “Only Americans obsess over original condition. Everywhere else in the world, people sent their guns back to the maker every few years to get tuned up.” The biggest pitfall to avoid in buying an old double, he says, is becoming smitten with a gun that doesn’t fit you. “A lot of these guns were made to measure. Many American guns have more drop in the stock than shooters are used to today. Check the stock dimensions, and be sure it’s a gun you can shoot,” he advises.

Jensen admits he sells 19 guns online for every one he sells over the counter, but he still keeps the space he’s leased at the Olathe Gun Shop for the past dozen years. I get the feeling he does it as much for himself as for his customers. There’s a pair of overstuffed leather chairs in the back, and a selection from Jensen’s library of 250 gun books. “My guns at home are no fun. They’re all in safes,” he says, as he sits in one of the chairs, surrounded by doubles.

These days Jensen only comes to the shop by appointment, because while guns may be his passion, ministry is his calling. He is an elder in a series of house churches in Kansas City, where he works with victims of human trafficking. He travels regularly on missions to Bhutan, Nepal, and India. “I love the guns,” he says, “but they will all be in a landfill some day. I want build to something that lasts. Besides, I am 63 and in good health, but who knows? I don’t want to die and leave my wife hundreds of guns to get rid of. This is my retirement plan.”

Jensen is winding down, but he still can’t resist the right shotgun. “What excites you in a gun?” I ask him.

“Unknown quality and unusual actions,” he says. “There are so many undervalued guns that don’t have a famous name, and there’s been so much ingenuity in design. Double guns are the last mixture of art and engineering.”

A few minutes later, I’m looking at the gun racks, trying to figure out where M&M’s guns end and the Olathe Gun Shop’s guns begin. I pick up a double.

He takes it from me. “No, but it should be,” he says, looking it over.

His practiced eye reads the gun’s life story. It’s a Charles Lancaster, made in London about 1902 or 1903. It has a lump on the bottom of the frame for an underlever but was converted to top-lever opening. Closer inspection shows the top lever came from another maker, Westley Richards, and the barrels were reblued at some point later on to hide the Damascus pattern when fluid steel became popular. It’s the kind of oddball gun Jensen loves.

Double gun in hand, Mike Jensen steps around the corner to the counter of the Olathe Gun Shop, right back where it all began.

Visit the Olathe Gun Shop in person, in Olathe, Kansas, or online here. Call the shop to make an appointment to see Jensen. He also sells many of his guns online with Gunbroker. The Needham centerfire-pinfire combination gun show above, for example, is listed here.