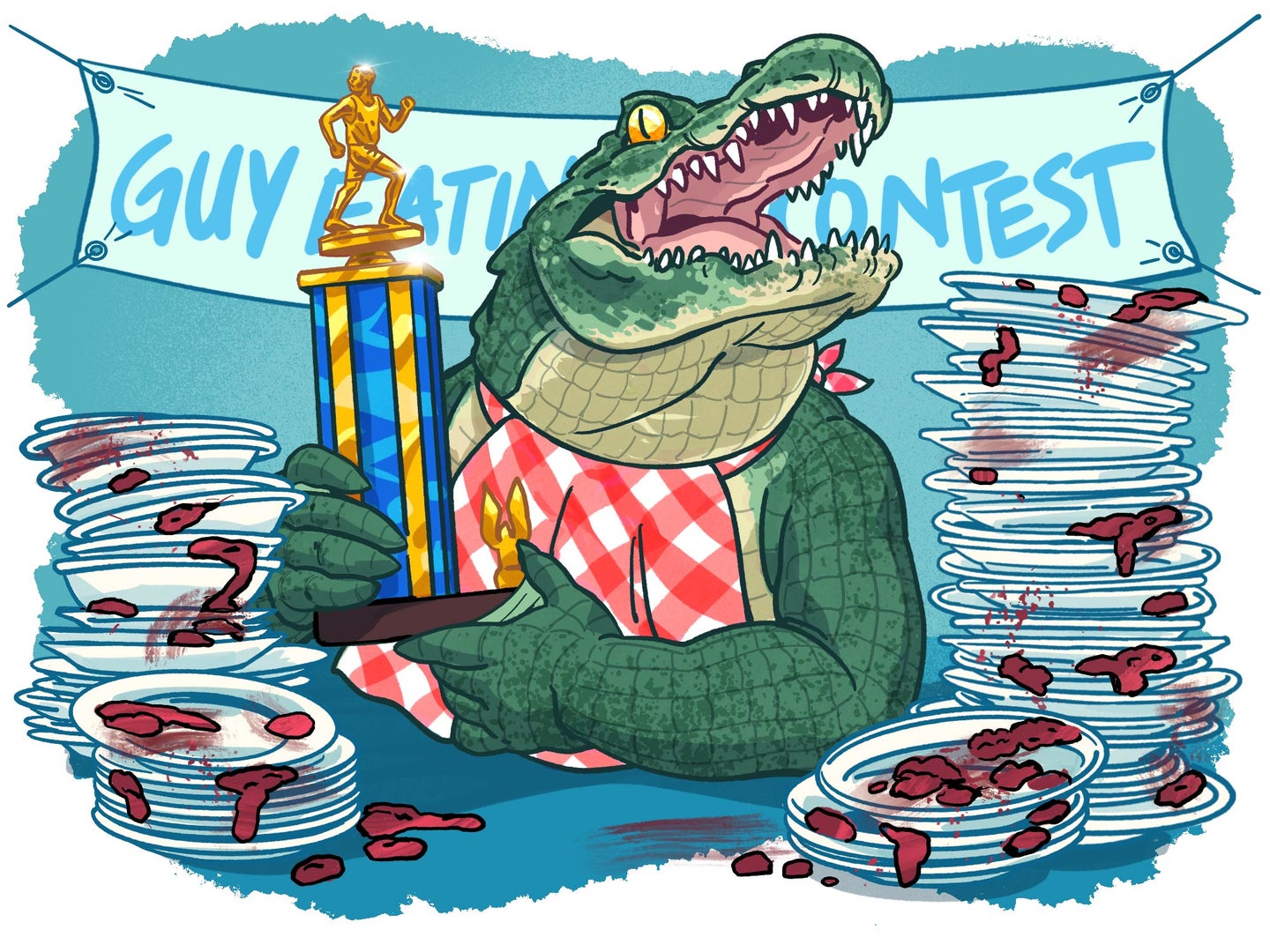 Give a choice of animal attackers, Petzal says the gator wins. Brandon Loving

You sent us your most pressing questions. This week, long-time F&S rifles editor David E. Petzal has the answers

For our first edition of Ask the Experts, we asked our legendary rifles editor, David E. Petzal, to take the hot seat and answer your questions on everything from animal attacks to his own bubbly personality. To all you Ask Petzal fans out there, you’re welcome.

Q: Attacked by a grizzly. Bitten by a venomous snake. Pulled under by a gator. If you had to choose one, which would you go with? —Daniel Gabhart, via email

A: I’d go with the gator. If a big one gets a good enough grip to drag you under, your demise will come very quickly. Grizzly attacks, on the other hand, can be protracted affairs involving the loss of body parts, and a bite from a serious snake with tissue-destroying venom can make you wish you were dead long before it happens.

Q: How do you balance the need for calmness and calculation in taking an ethical rifle shot without wasting an opportunity. I’ve had several could-have-acted-quicker moments and am in a rut and struggling for confidence. The perfect opportunity isn’t always going to present itself. At some point you’ve just got to take the shot and live with the consequences, right? —Joel Brosseau, via Instagram

A: It sounds like you’re trying to develop poise when it’s time to pull the trigger, and I can tell you that from what I’ve seen, poise is in damned short supply. If you want to develop it, shoot in competition, where you have to function or be humiliated in public. I’m not fond of uttering platitudes in stained-glass attitudes, but amateurs practice until they’re pretty good at whatever it is. Professionals practice until they’re all but incapable of making a mistake.

Q: If you had a one-way time machine and could go anywhere into the future or past, where would you go and why? —Colt Lenz, via Instagram

A: One-way? Wow, that complicates things. I would like to travel back to northern Europe in Neolithic times and see what Neanderthals were like before we killed them all. I would not, however, expect to stick around for very long before something got me.

Q: What is the worst shot you’ve ever taken? —Cameron Bissell, via Instagram

A: If you mean the worst miss I ever made, I’ve missed so seldom that I can’t bring one to mind. If you mean the shot I most wish I’d never taken, it’s this: In 2005 I was hunting in South Africa and was spending most of my day sitting alone in a colossal baobab tree overlooking a waterhole, watching the wildlife that came to drink the awful stuff that seeped into the little pond. One of the regulars was an ancient warthog whose visits I particularly enjoyed. But one day the Devil spoke to me, saying, “That is one hell of a fine set of tusks on that wart hog, and you’re here to hunt, so what are you waiting for? Shoot.”

And I did. And in the millisecond the bullet went away, I knew I had made a terrible mistake. It haunts me to this day. Fine as the tusks were, I gave them away. Over the years, I’ve held fire on more than one animal and never regretted doing so. I wish I had done so in this case.

Q: What’s the true reason for more cartridges? To sell more ammo or to fill a specific need? —Andrew Wall, via Instagram

A: This is an easy one. All the real gaps in our cartridge lineup were filled by the 1950s. Since then, enormous improvements in gunpowder and bullets have made any further additions redundant. All the new rounds we’re seeing have been cooked up so ammo makers can have something to sell that hasn’t been beaten to death.

Q: Are you experts aware that Bill Heavey might be the best writer F&S has ever had? —Stefan Prigmore, via Facebook

A: “The best Field & Stream has ever had” takes in a lot of time and territory and some wonderful writers, so I can’t honestly say that any one of them was “the best.” I will say this: If you claim Bill Heavey is the best, I can’t argue with you, nor can I think of anyone who is or was better. This, of course, makes no allowance for Heavey’s many, and terrible, failings as a human being.

Q: What is the best affordable deer ammo? —Morrison Rabine, via email

A: By “affordable” I assume you mean a box of 20 that costs less than a full tank of 93 octane for your SUV. I don’t know. I don’t buy cheap ammo. For most of my shooting, I handload. Since you’re talking about hunting ammo, look at it this way: Inexpensive ammo is loaded with cheap bullets. Cheap bullets don’t perform as well as premium bullets, and since your entire hunt can boil down to whether your bullet does its job, are you sure this is the place where you want to save money?

Q: Are you still alive? —Kent Collins, via email

A: On the one hand, everything I see and hear in the year 2022 seems either half nuts or totally crazy, so it’s possible that I am dead and in hell. On the other hand, no one can have as many things wrong with them as I do and not be alive, so the answer is yes, I am. For the time being, at least.

Q: How do you maintain such a bubbly personality in the current political climate? —Brandon Bess, via Instagram

A: I was born perky; sort of an unholy mixture of Mary Tyler Moore and the early Julie Andrews. Aside from that, I remind myself that whatever the morons in charge cook up, I won’t have to live with it for very long.

Q: You are one of my favorite outdoor authors. Your turn of phrase and wisdom reminds me of a Mickey Spillane novel. My question is: When will you publish an anthology of your adventures? Particularly your African adventures. Your African adventures are better Capstick and all the rest and much less likely to be overly embellished. —Bill Byers, via Facebook

A: Mickey Spillane? You must be as old as I am. Who the hell has read Mickey Spillane in 60 years? But I digress. I will not publish a book of my African adventures, nor has anyone else offered to do so. There are already far too many books on African hunting, and no one has come close to equaling Robert Ruark’s Horn of the Hunter, which was published in 1953. If you’d like the experience of writing and publishing a book, dig out one of your eyes with a screwdriver.

Q: If you were to design a rifle, budget unlimited, what would this pinnacle of design and performance be? —Caleb Jones, via Facebook

A: The rifles we have now are so incredibly good that I would not even attempt such a thing.

Q: I’ve saved up enough money for either a dream rifle or a dream hunt. Which should I get? —Evan Lavery, via email

A: Get the hunt. A rifle is just a machine. A great hunt is a treasure chest into which you can dive for the rest of your life. I’m not hopeful about the future of hunting given the speed at which climate change is progressing. Take the hunt, and soon.

Q: You don’t seem to be a fan of long-range shooting in the field. Has anything good come from the long-range craze? —Braedon Seager, via email

A: What I’m against is long-range shooting as your standard game plan. It’s not sporting, and it sure as hell isn’t hunting. On the other hand, there are times when you’ve worked your ass off hunting conventionally and time has run out, or there’s an exceptional trophy involved, or it’s the hunt of a lifetime and you won’t be able to afford another, so you can move past the 400-yard limit (it used to be 300) with a clear conscience. In other words, as a last resort. This is where a knowledge of long-range shooting is worthwhile and legitimate. In over 50 years of big-game hunting, I think I’ve taken five or six shots past 300 yards. That’s about the right proportion. I think that by contributing that dimension to the sport, and by causing the equipment to be developed, the long-range craze has added a great deal.