Today's best air pistols offer something for every shooter, no matter what your budget 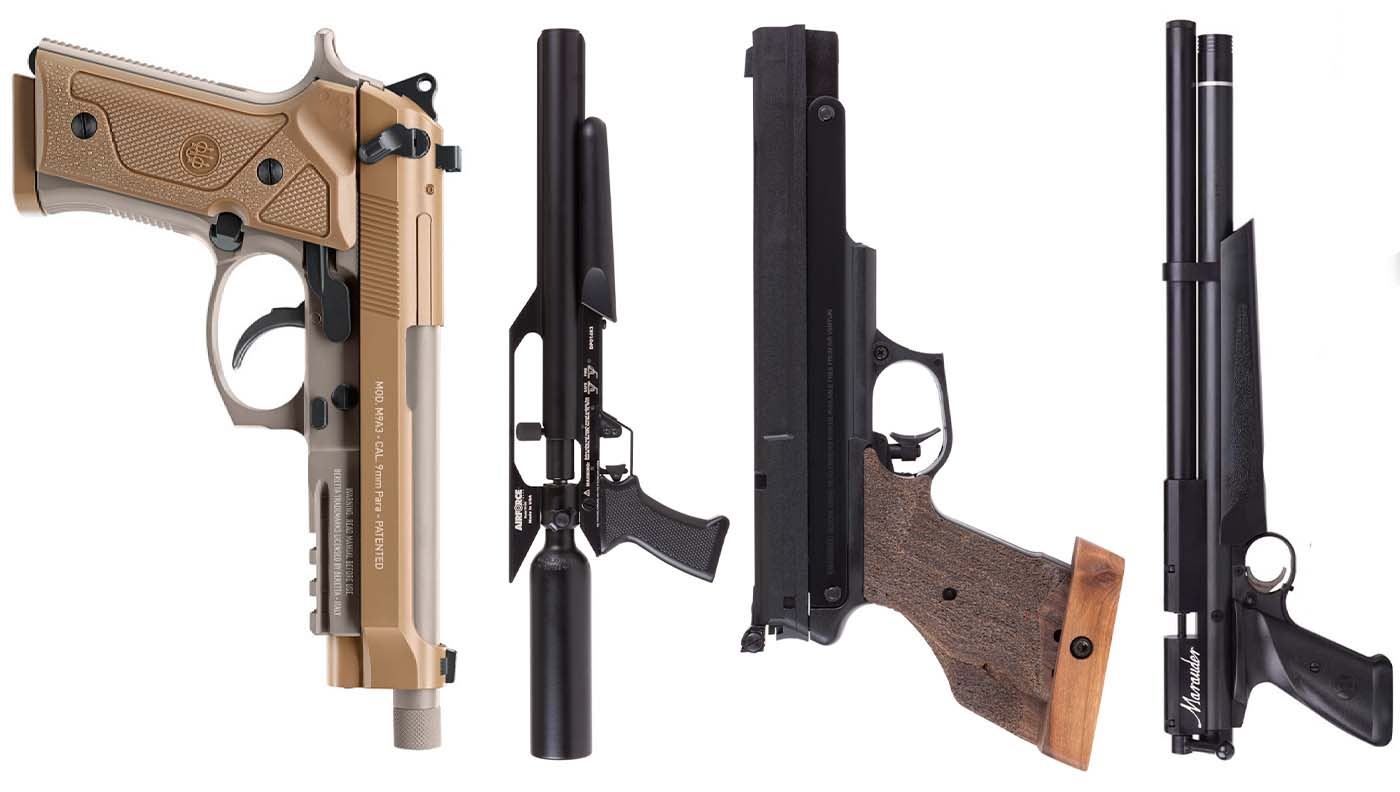 Every year there are more and more air guns on the market, and the vast majority of them are of the long-gun variety. But if it’s an air pistol you’re after, you’re in luck. That part of the air-gun world is rapidly expanding these day, and you should have no trouble finding the right model for your purposes, whether you’ve got a hundred bucks to spend or a thousand. Here’s are seven serious air pistols, in a wide range of prices, that are great for hunting, training, competing, or plinking.

It’s not easy to create a compact air pistol that produces enough energy to humanely take game, but the pre-charged pneumatic Ataman AP16 manages to get the job done. In .22 caliber, the AP16 delivers a little over 18 foot-pounds of energy at the muzzle. This much power means you can take game up to about 5 pounds, so load up and go after cottontails or hit the dairy barn for pigeons. This pistol’s power comes from the stout but trim reservoir located directly below the barrel, which can hold air at an impressive 300 Bar, which is around 4,350 pounds per square inch. Despite the extreme pressures, the regulator provides consistent shot-to-shot output. With its free-floating Lothar Walther barrel and two-way adjustable match-grade trigger, which can be set to break as low as 0.44 pounds, the AP16 is an extremely accurate air pistol. An 11mm dovetail allows you to mount a red dot or scope, but the included sights are quite serviceable.

AirForce air guns are synonymous with big power, and the TalonP is no exception. The pre-charged pneumatic pistol delivers over 50 foot-pounds of energy in .25-caliber, making the bolt-action single-shot a viable option to take out raccoons and similar-size critters in a compact package. You can easily tune the power up or down, thanks to a selector that lets you set speeds anywhere from 400 to 900 feet per second. The Lothar Walther barrel on the TalonP delivers accuracy out to 100 yards and beyond in the higher settings. The tradeoff is weight, and with the reservoir hanging off the back like the buffer tube on an AR-pistol, it’s just begging for a brace. Fortunately, you can pick up an adaptor that converts the reservoir into a buttstock. It’s also fairly loud for an air gun, as the short 12-inch barrel lacks any sort of shroud or suppressor to eat up the decibels. If noise is a concern, look at the newly released TalonP Carbine with removable moderator that offers similar performance in a slightly larger package.

Made in the USA, the Benjamin Marauder has long been a favorite of air rifle shooters, with a well-deserved reputation for quality. The pistol version has all of the great features of the rifle, in a more compact size. The pre-charged pneumatic pistol has enough oomph for hunting small game, producing 15.5 foot-pounds of energy at 700 feet per second with a .22 caliber pellet. That means you can take bushytails out to about 30 yards. Pellets feed from the same 8-shot auto-indexing circular magazine as it’s larger kin, allowing quick follow-up shots by manipulating the rear-mounted bolt. The Marauder pistol now features an adjustable, two-stage, drop-sear trigger that is a significant improvement over earlier models, breaking cleaner than before.  A built-in pressure gauge lets you know when it’s almost time to refill. The Marauder pistol also includes a shoulder stock that can be attached by swapping the grips, giving more support.

Hatsan’s Sortie Tact is a rarity amongst air pistols; it’s a semi-auto with enough horsepower to take out small game. This pre-charged pneumatic pistol was constructed with technology developed for Hatsan’s successful Barrage and Bullmaster semi-auto air rifles, and this more-compact model manages to push .22 caliber pellets at 700 feet per second with a little over 15 foot-pounds of energy. The smaller, 62cc reservoir fills quickly with a hand pump. A full-length shroud keeps report down despite the abbreviated barrel. But the real unique feature on the Sortie is the detachable, side-folding stock that looks like it belongs on a personal-defense weapon rather than an air gun. The top of the receiver is milled with Picatinny rail, as well as both 11mm and 22mm grooves for scope mounting. Or just go with the included detachable and adjustable Truglo fiber optic sights. Unfortunately for lefties, the grip angle on the Sortie won’t work for southpaws. The Sortie ships in a hard case with three magazines so you can empty the reservoir in a hurry.

There’s no replacement for live-fire training with a firearm. But with the current ammo shortage, some folks are thinking outside the box to get their practice in. Sig Sauer modeled the P365 Air Pistol after its 9mm counterpart to approximate the weight and feel of the powder-burning version. The polymer frame has a metal slide with front and rear slide serrations that operates with full blowback, similar to the 9mm. The magazine of the replica houses both the 12-gram CO2 cartridge and 12 BBs, making loading similar to the real deal. It even wears the Sig accessory rail so you practice with the same light or laser you typically carry. Green, high-visibility 3-dot fixed sights and a manual ambidextrous safety round out the features. As it only pushes steel BBs at 295 fps, this one is reserved for training and paper-punching duty only. Build muscle memory drawing and firing the air-powered P365 Air Pistol while you build your ammo stores back up.

Like the Sig above, the Umarex Beretta M9A3 is suitable for training. Unlike the Sig, you can flip a switch and unleash a steady stream of BBs. The licensed replica mimics the real thing, but features full-auto operation that can send 18 BBs downrange with a single pull of the trigger that is sure to liven up range day. To emulate the original, Umarex used a metal frame that gives it a realistic heft and feel. The single- or double-action trigger even functions just like the real M9A3, as does the authentic safety. While the kick isn’t comparable, the slide has realistic blowback action. A full size, drop-free magazine gives you the ability to practice reloads, and houses the 12-gram CO2 cylinder as well as 18 BBs.

Recently, there has been an explosion in interest surrounding .22 rimfire competitions. This is likely due to the low cost of entry, a trait shared with competitive air gun shooting. With the ammo shortage, I can’t help but wonder if air gun contests will undergo a similar renaissance. You’ll probably need to spend a couple grand to be competitive in Olympic-level 10-meter air-pistol contests, but with enough practice, you can dominate local levels with a pistol that costs about $250. The Air Venturi V10 Match Air Pistol has all of the features you need to take the podium, including a match-grade barrel, adjustable sights, and an adjustable, two-stage trigger that can break with as little as .88 pounds of pressure. The V10 relies on a single-stroke pneumatic mechanism for propulsion, so you don’t need any filling equipment or CO2 cartridges to shoot. The stippled walnut grip features a large palm shelf on the right side that adjusts for a custom fit, and a thumb rest on the left for a secure grip. Pick up a V10 and some premium pellets and go punch some 10-rings.

Outdoor Life is dedicated to covering safe and responsible gun ownership for hunting, recreation, and personal protection. We participate in affiliate advertising programs only with trusted online retailers in the firearms space. If you purchase a firearm using the links in this story, we may earn commission.