The 5 Coolest Combination Guns Ever Made

Can’t decide between a rifle and a shotgun? You don’t have to. Here are five guns that do it all 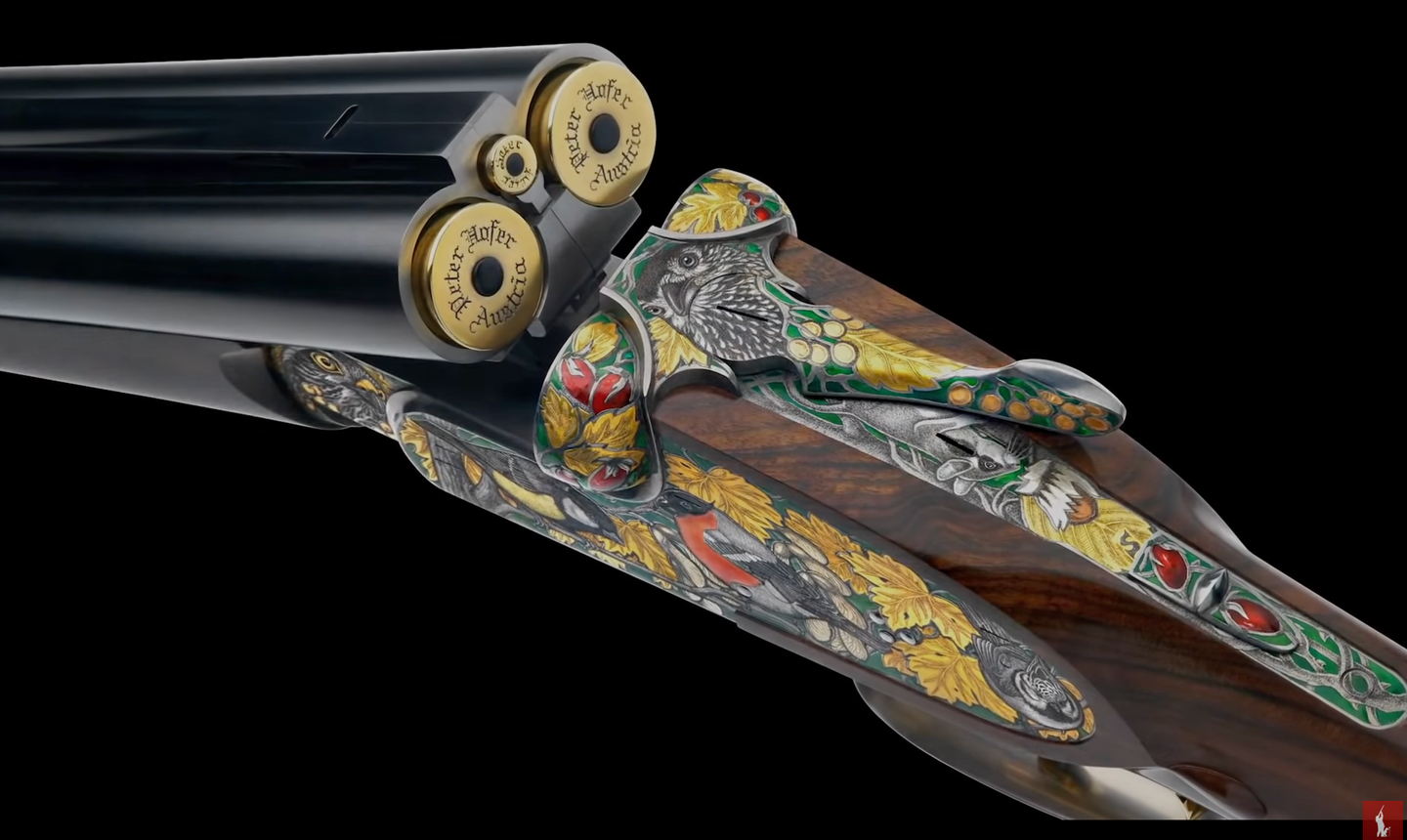 Have you ever looked at your favorite bird gun and thought, I wish this shotgun was also a rifle? Or maybe after shooting your AR you felt that it was missing something—like a sawn-off shotgun mounted on the forend.

Combination guns have always pushed the limits of what’s practical to carry in the field. They come in many configurations and sport multiple barrels in a number of chamberings. They’ve been built in small shops by guild-level craftsmen and mass-produced in factories. Some gunsmiths create them for specific situations while it seems others make them for just about every situation.

Whatever the case, all combination guns do the same thing: They let hunters and shooters have their cake and eat it, too. Having the right combination gun will let you take different kinds of game in one outing, like birds and deer, or hopefully give you an edge on the battlefield. We don’t have space to list all of the possible barrel combinations and configurations out there, but here are some of the standouts. Some may look impractical, but they’re all a testament to how far gun makers will go to make two guns into one.

If you fought in the Civil War from beginning to end, you would have seen one of, if not, the most rapid advancements in military small arms ever. You would have walked into battle on day one with a musket, and left getting shot at by lever-actions, revolvers, and one of the first machine guns. Just about anything weapon designers could think up was being tested in real-time, on the battlefield. But few Civil War gun inventions are as cool as the LeMat revolver.

The LeMat was invented by Jean Alexander LeMat of New Orleans and used by the Confederacy. It’s a nine-shot .42 cal muzzle-loading revolver with an 18-gauge shotgun barrel mounted under the barrel in front of the center axis of the cylinder. The pistol was designed for cavalry troops, and the shotgun portion was intended to be used as a miniature grape-shot cannon on fast-moving targets.

A LaMat carried by Confederate General P.G.T. Beauregard sold for $224,000 at auction in 2016. Before the war, he wanted the design to be manufactured for the U.S. Army. After he attacked Fort Sumter, he was happy it hadn’t been. More recently, Ed Harris used a Hollywoodized version of the LeMat to terrorize humanoid robots in the HBO series Westworld. Around 3000 LeMats were made in the 1800s, and you can pick up a .44/20-gauge reproduction from Pietta for just over $1000.

Unlike complicated hand-built European combination guns, the Model 24 is a hunting tool made for the masses. But the Model 24 is by no means a low-quality gun. With a rifle barrel for long shots and a shotgun for anything that runs, jumps, or flies, Model 24s were made for just about any gun-related task in the woods.

Before Savage started making the gun in 1950, Stevens sold it as the model .22-410. During WWII, the U.S. Army Air Corps ordered over 22,000 Model .22-410s at $10.62 each to issue as an aircrew survival gun. The military guns were stocked in an early version of plastic called Tennit, which was said to have a tendency to break. Savage discontinued the Model 24 in 2010 and the small game hunters who had experience with them were sad to see it go.

The M30 is an extravagant gun on its own, but when placed next to other aircrew survival guns, it really shines. This is best illustrated with a comparison.

The American M6 survival gun didn’t take to the skies in WWII, but it’s an example of a typical pilot’s survival gun. Constructed of stamped sheet metal, it could shoot .22 Hornet and .410 and held a handful of shells in the buttstock for bagging small game. The M30, on the other hand, was intended for a full-blown safari. It’s a drilling, the prefix dri meaning three (drei) in German signifying that the gun has three barrels—two 12-gauge barrels over a 9.3x74r rifled barrel, which is comparable to a .350 Rem. Mag. The guns were built by Sauer & Sohn in the gunmaking town of Suhl where it was engraved, case hardened, covered in swastikas, and packed in an aluminum travel case with loads of ammunition.

The M30 drilling saw action in Africa, where one could make the case for a hunting gun of its caliber. But most of the game that demands a 9.3x74r lives in central and southern Africa, and Nazi airmen were fighting in the north. The rest is a bit of a mystery. Some think that the gun was a product of cronyism on the part of Gen. Goering, who was the head of the Luftwaffe and Nazi Germany’s Master of The Hunt. Whatever the reason for such a luxurious survival gun, it didn’t last long. Roughly 4000 M30s were ordered from Sauer & Sohn, but only 2500 or so were delivered before someone crunched the numbers and nixed the project.

The neatest thing about the Luftwaffe Drilling is that when you turn the selector switch to the rifle barrel, a small rear leaf sight automatically rises from the rib, turning your front bead into a front sight. The left barrel was also regulated to shoot a slug to the same point of impact as the rifle barrel, and airmen were given 20 Brennake slugs in their kit. Had they gone farther south, downed Luftwaffe pilots could have enjoyed a hunter’s paradise, but in the sandy deserts of the north, they would have been hungry.

A drilling is a triple-barreled combination gun, a vierling has four barrels, and a funfling has five. Peter Hofer of Ferlach, Austria makes them all—plus just about any other configuration of barrels, triggers, and steel you can imagine. If you’re willing to shell out the kind of money to afford one of Hofer’s guns, this is the kind of variety you should expect.

Hofer blends engineering, art, and a mind-numbing level of craftsmanship to build combination guns. Rather than just stacking gun barrels on top of and next to each other, his shop finds interesting ways to integrate them with one another. A good example is one of Hofer’s drillings called the Autumn. It’s a side-by-side shotgun with a .17 Hornet barrel hidden in the rib. Most drillings go big or go home, inevitably adding weight to the firearm. But by using such a small rifle barrel, the Autumn has a weight and balance similar to that of other 12-gauge side-by-sides.

There’s something sneaky and almost villainous about the way the Autumn’s rifled barrel hides in plain sight. The gun has two triggers, but the barrels aren’t fired via a selector switch like the Luftwaffe drilling or Model 24. Instead, the front trigger sets off both shotgun barrels in a right/left sequence while the rear is a set trigger for the .17 Hornet.

Big game is a stretch for the rifle portion of the Autumn, but I imagine it would be right at home on a quail hunt that happens to involve a mid-range jackrabbit or two. The oil baron or oligarch who ends up buying it probably wouldn’t be caught dead chasing up jackrabbits in the desert, but if I had the money to afford one of Hofer’s drillings, I like to think that’s exactly what I’d do with it.

Alone, the SIX12  is a 12-gauge revolving bullpup shotgun, which is pretty cool in its own right. Slap the gun on the forend of an AR, and it becomes another animal. The SIX12  debuted in 2014, and it was created by gun designer Eric Burt. It uses a revolving, detachable cylinder that cycles with the pull of the trigger—making the gun completely mechanical. It was designed to be attached under the forend of a rifle to shoot the locks off of doors.

Before options like the SIX12 came along, those who wanted to open a door with a shotgun had to bring a separate shotgun, shoot the door open, and then get out of the way while their buddies walked through the door shooting their rifles. With a SIX12/AR-15 combination gun, a shooter can blow a hole in the door, kick it open, and simply raise his or her rifle.

For anyone who breaches doors for a living (or plays Call of Duty), this may remind you of the Knights Armament Masterkey, which was essentially a short Remington 870 fixed to the bottom of an M16. But the SIX12  is more ergonomic and, as the name implies, keeps six rounds of 3-inch, 12-gauge shells on tap which is three more than a sawn-off 870.

The SIX12  can also be mounted to a Picatinny-rail chassis and used as a stand-alone shotgun without an AR. And its barrel can be swapped for a longer one making it very versatile. Vantage arms, the company that manufactures the SIX12 , has also worked with SilencerCo to make a suppressed version, and they’re even making a wood-stocked hunting version of the gun. A quick look at Vantage’s website shows that the SIX12  has yet to be released to the general public, but you can sign up to be notified when it is.