Everyone knows that the biggest, gnarliest bucks live in the deepest woods. Here are the rifles you need to put a tag on them 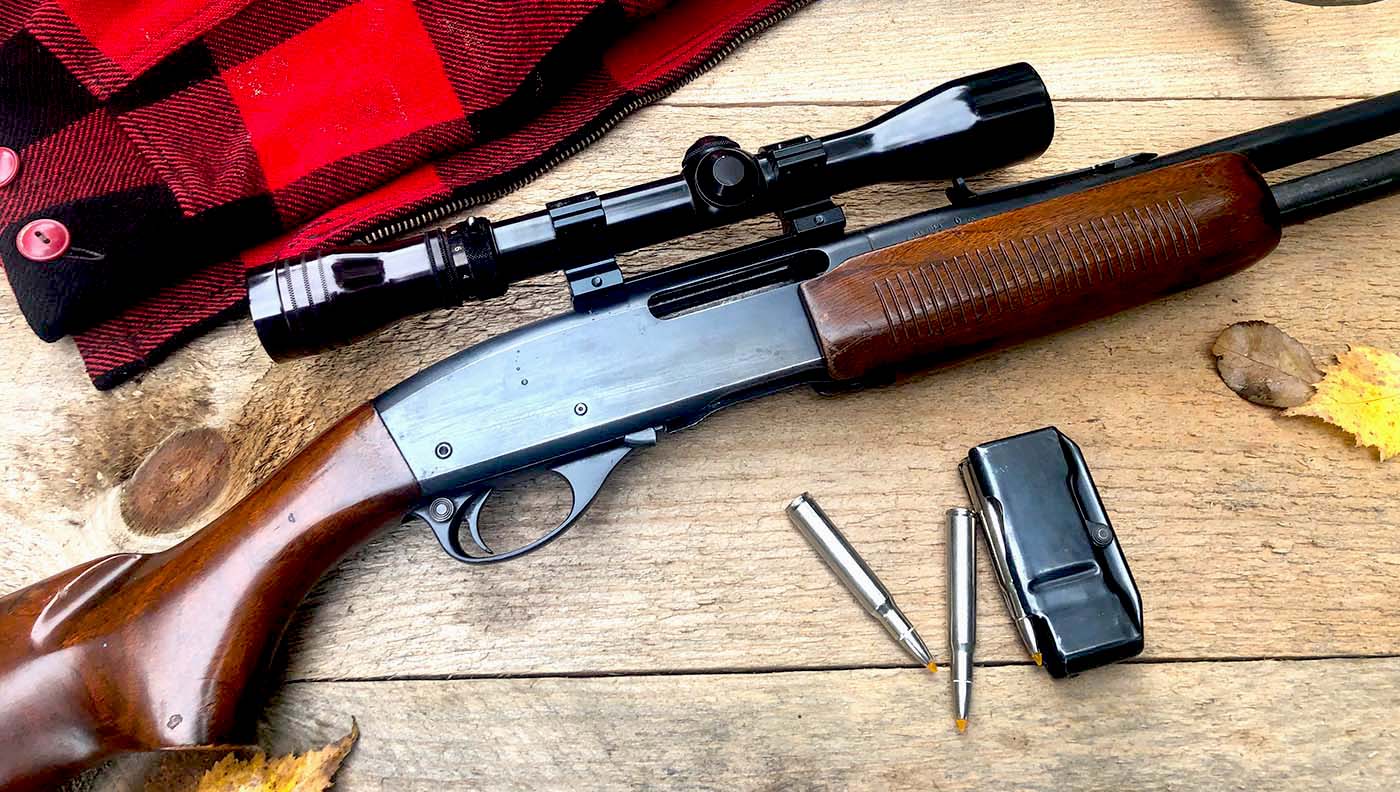 The Remington 760/7600 in .30/06 or .35 Whelen is one of the most beloved big-woods thumpers in Northwoods deer camps. Dave Hurteau
SHARE

Dwelling within the heart of all dedicated deer hunters is the belief that the biggest bucks live in the deep woods. There’s no true definition for “deep woods.” It varies from coast to coast. It might be one corner of the back 40, or near on the old homestead, or miles into public hunting ground, just over the next ridge. But getting to the deep woods always requires effort; it means a steep climb or crossing the river or crawling across clear cuts.

A hunt into the deep woods is special because harkens back to deer hunters of old and requires extra planning and consideration. It makes perfect sense, then, that it should also require a special rifle. Just as we have dedicated deer rifles for the open plains, high mountains, and Texas senderos, we also have deep-woods deer thumpers—handy rifles, usually repeaters, chambered for big, so-called brush-busting rounds. Here are my five favorites.

In 1964 Marlin introduced a centerfire rifle cartridge with their name on the headstamp. It was designed to function in their famous Model 336 lever-action rifle and utilized a 0.429-caliber bullet. It was called the .444 Marlin but could have been named the .44 Double Magnum because it was essentially a longer version of the big-bore revolver cartridge detective Callahan would make famous a few years later. The .444 Marlin was introduced at a time when the much older, and now more popular, .45/70 was not available in lever guns.

The combination was a hit and deer hunters counted on it to hammer big whitetails, as it would push a 300-grain hollow-point bullet to about 2000 fps. Just before Marlin shut their doors in 2020, they offered a 150-year anniversary rifle in .444 Marlin. It is engraved and inlayed and fitted with a fine piece of walnut. Look hard enough and you can find one of these, or one of the earlier .444s. Hornady now offers a Superformance load that a 265-grain bullet to almost 2400 fps. No deep woods buck can stand up to that.

When it comes to deer in the deep woods, one of the most famous rifles used to chase them is the Remington Model 7600. Legendary for their abilities to trek deep into the big woods and root out monster whitetails, the Benoit brothers relied on Remington’s famous pump-action rifle. Originally known as the Model 760, and later as the Model 6, the Model 7600 is now unavailable; it disappeared with Remington in 2020. But there are plenty of used ones around.

The 7600 has been offered in a wide array of cartridges, but when it comes to deep-woods deer busters maybe the most iconic is the .35 Whelen. A .30/06 cartridge necked up to accept a 0.358-caliber bullet, the Whelen is suitable for any game in North America. Hornady has a 200-grain load at an incredible 2900 fps. Quick handling, fast cycling, and incredibly powerful, the 7600 in .35 Whelen might be the deadliest deep woods deer rifle of all time.

In 1955 Winchester introduced the Model 88, which was an incredibly modern take on the lever-action rifle. It was lean and trim and extremely pleasing to the eye. It was also fast as lightning to cycle and lever-gun-loving Easterners were drawn to it. The .358 Winchester cartridge is just a .308 Winchester necked up to 0.358-caliber; it’s like a short version of the .35 Whelen. It quickly established a following with deer hunters, and many swore it killed big bucks like nothing before.

Sadly, the last 88 was manufactured in 1973, and production of 88s in .358 Winchester ceased in 62. Though in 1965, 473 additional 88s in .358 were assembled and shipped to Canada. Model 88s chambered in .358 rarely show up on the used market because their owners love them more than their children. If you find one, mortgage the house and buy it quickly. Then load it up with the 225-grain Buffalo Bore load and bust some big bucks.

CZ’s current Model 557 American is a finely crafted bolt-action with a hammer forged barrel wrapped up in a Turkish walnut stock. But not all that long ago, CZ’s flagship rifle was the Model 550, and the full-stock model, with beautiful wood that ran out to a steel nose cap at the muzzle, was as graceful as hard-working deer rifles has a right to be. As with all CZs, the 550FS had integral scope bases, but it also had excellent open sights and the extreme drop of the stock allows your eyes to find those sights instantly.

A few of these gorgeous creations were chambered for the 9.3x62mm Mauser, a cartridge capable of taking down every game animal on Earth. No deer in the woods—deep or otherwise—can stand up to Nosler’s 250-grain AccuBond at 2550 fps. A CZ 550 full-stock rifle in 9.3×62 might not help you find that deep-woods bruiser, but you’ll for sure be the coolest kid at the campfire.

There’s no cartridge more attributed to busting big bucks than the .30/06 Springfield. It won the heart of American soldiers in two world wars and continues to be the big-game cartridge all others are judged by. What determined deep-woods deer hunters have always needed was a lightweight, lever-action .30/06 that was fast-handling and riflescope compatible. Ultimately, Browning gave them what they wanted with the BLR Lightweight 81 Stainless. But this rifle came with a little something extra; it was a takedown.

Imagine packing deep into the dark timber with all your camping and hunting gear and with a lever-action rifle chambered for the legendary .30/06. Then imagine using that rifle to jump-shoot a monster whitetail. Then, once all the butchering is done, you could break that rifle down and pack it out with all your venison. That’s the allure of this rifle and cartridge combination. Browning still makes the BLR Lightweight 81, but you’ll have to prowl gun shows and the Internet to find the much-adored takedown version.