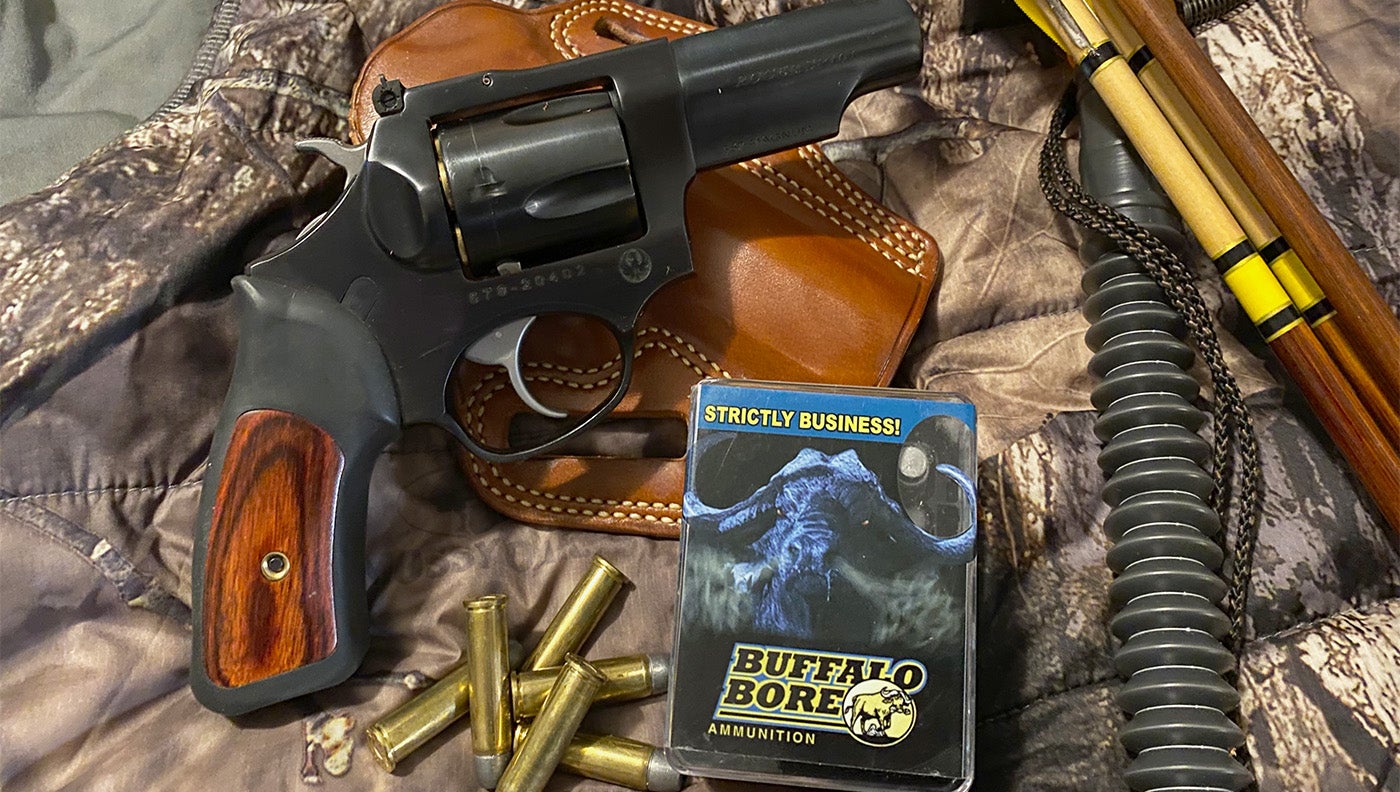 If you're hunting with archery gear in bear country, it's not a bad idea to pack a defensive handgun, where legal. Richard Mann
SHARE

Many states permit hunters to carry a handgun for self-defense. It’s not so important for rifle hunters, because in most outdoor situations a rifle is as good or better for self-defense than any handgun. However, things happen while hunting, and for archery hunters a potent self-defense handgun is not a bad idea. You might need it to fend off a rabid critter. You could surprise a grizzly, black bear, or mountain lion. And if you happen to stumble onto one of a growing number of illicit public-land marijuana fields, you’ll probably be glad to have it. Here are five great options for hunters looking for a self-defense handgun to carry when out in the timber. Just make sure you learn how to shoot it, and always obey all legal requirements in your hunting location.

When it comes to a handgun for survival in the wild or just about anywhere for that matter, it’s hard to beat a .357 Magnum revolver. Ruger’s GP 100 is one of the most rugged revolvers made, and it’s available with barrel lengths from 2.5 to 6 inches. If you like the idea of a larger slug, there’s a GP 100 chambered for the potent .44 Special. But the .357 Magnum version with a 2.5- or 3-inch barrel makes more sense. It can also fire .38 Special ammunition and is much easier to carry than the longer-barreled versions. Some consider this setup too light to stop the bigger bears, but if you use Buffalo Bore’s 180-grain Outdoorsman load at 1300 fps, it will do the job. Prices for new GP 100s typically run a bit less than a grand.

From tree stands to packed lunches and bottles of deer pee, bowhunters carry a lot of gear afield. Even if you want a handgun for personal protection while hunting, the thought of carrying another 2 pounds is not appealing. A great answer is the Diamondback DB9. This ultra-compact 9mm holds six rounds and weighs less than a pound. It’s also small enough to stuff into the pocket of your hunting coat or backpack. If you wear it in a holster, you’ll forget it’s even there—at least until you need it. Made of polymer and stainless steel, DB9s are reliable, plenty accurate for self-defense, and can usually be picked up for less than $300.

I helped Lipsey’s design this revolver for carry while hunting, specifying a lightweight frame and XS Sights. I hardly go afield without it. It’s chambered for the potent .327 Federal Magnum, and when I load it with Buffalo Bore 130-grain hardcast loads at 1350 fps, it will take care of most marauding critters. It’s also sufficient for deer during handgun season. While single-action revolvers are not considered the best option for self-defense against human threats, they’re ideal against the four-footed kind. As a side benefit, loaded with lighter-recoiling .32 H&R ammo, its’ great for small game. With even lighter-kicking .32 Long ammo, it makes for a fun plinker around camp. Price is usually around $670.

If you want a full-size duty pistol for personal protection while hunting, and you want one with a lot of punch, the Glock G20 in 10mm is the way to go. It weighs about 40 ounces with a 15-round magazine full of Lehigh Defense’s 140-grain Extreme penetrator ammunition, which will blister out of the 4.6-inch barrel at about 1200 fps. The “SF” model designation stands for “short frame,” which means the circumference of the frame has been reduced, improving ease of use and providing more control. Of course, if you think 10mm is too much gun, there’s a Glock available chambered for just about any pistol cartridge you want. However, if you’re wandering into grizzly country, get the 10! Expect to pay about $650 for a new G20SF.

If you do most of your hunting in big-bear country, you probably want even more punch. Although grizzlies have been stopped with lesser cartridges, the .44 Magnum is the one most trust to do the job. Smith & Wesson’s model 69 Combat Magnum chamber in .44 Mag is a handful, and at 34 ounces, it’s probably best carried in a chest holster. With its 2.75-inch barrel, you can expect the recoil to be fierce and the fireball to be large, but if you want to smack some sense into a brown bear, you’ll take it over the alternative. If the Magnum is too much wrist-twisting for you, .44 Special ammo is always an option. With either chambering, again look to Buffalo Bore’s Outdoorsman loads. The Model 69 typically goes for under $900.