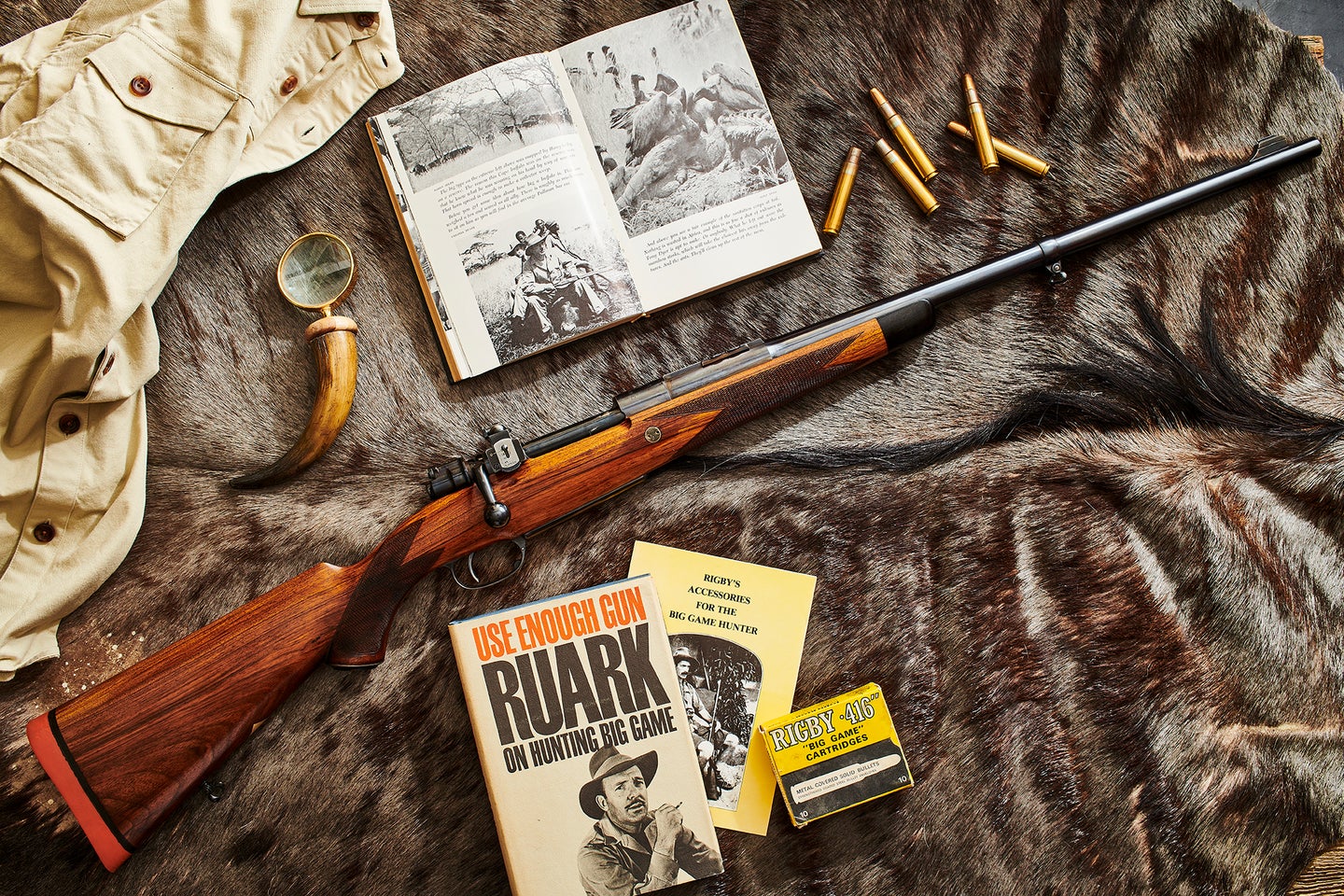 A postwar J. Rigby & Co. No. 5 Big Game magazine rifle in .416 Rigby. The gun and cartridge were immortalized by F&S writer Robert Ruark in his books Use Enough Gun and Horn of the Hunter. Ruark’s PH, Harry Selby, carried a Rigby like this for 50 years after his prized double rifle was run over by a truck and destroyed.

The Showstoppers: A Visual Tour of Some of the Most Stunning British Dangerous-Game Guns Ever Made

British dangerous-game guns define an era of hair-raising hunts in faraway places. These vintage big-bores are just what you’d want for staring death in the face

YOU CAN’T HAVE true romance without a little danger, and no objects embody this truth better than British dangerous-game guns. They are both beautiful and horrible, brutal and graceful, refined and tough as nails. Why do English guns capture the very idea of hunting scary animals in exotic places? Because the Brits practically invented dangerous-game gunning. At the height of the British Empire, their influence stretched to almost every inch of the globe, including places like Bombay (now Mumbai) and Nairobi, which were jumping-off points for safaris in those days. As a result, the era’s top U.K. gunmakers raced to create guns that fired big, powerful cartridges in ever more efficient ways.

Makers like Rigby, Westley Richards, Holland & Holland, W.J. Jeffery & Co., and Purdey may not be on the cutting edge today, but they were the Gunwerks, G.A. Precision, and Christensen Arms of their time. Each scrambled to gain an edge, developing rifles that were both aesthetically and technologically refined. They did this work by hand, with chisels, files, and a level of craftsmanship that has all but vanished in the age of CNC machines.

While these rifles and the adventures they’re built for seem like things of the past, you can still hunt with them today. However, as only a handful of them are built every year, it isn’t often that many are in the same room together. That’s why we called L.D. McCaa of Westley Richards & Co.’s U.S. Agency to put together a battery of vintage British dangerous-game guns. McCaa is an authority on English sporting arms and has traded some of the greatest examples of these guns on Earth. From magazine rifles built on Mauser actions to luxurious doubles and single-shots, each of the following guns was optimized to shoot bone-splitting cartridges with unfailing reliability. They may look like expensive safe queens, but each of them has seen death-defying hunts and adventures that most of us can only dream about.

The buttstock of actor Stewart Granger’s .577 Westley Richards double rifle. The gun was originally built for a Polish count in 1923. Granger bought it later for hunting dangerous game in Africa. The inlaid hash marks represent the number of animals taken on his trips; the letter c indicates that the animal charged.

A Westley Richards & Co. Farquharson single-shot with a detachable barrel made in 2014 (left) next to a William Evans Webley Patent Model 1902 underlever vertical-falling-block sporting rifle made in 1916. The Westley Richards is the only single-shot the company has made since World War II.

The hand-detachable lock is a Westley Richards invention that allows the owner to service or replace a gun’s locks without the use of tools. Westley Richards is the only company that makes “droplocks” today. It encourages its customers to purchase extra locks in the unlikely event of a malfunction.

This A. Hollis & Son double rifle was built for hunting in India. The engraver embellished the side plate with a scene depicting Indian elephants, which can be recognized by the lump on the head and the small ears. Maharajahs were major buyers of British dangerous-game guns in the early 20th century.

These rifles show two examples of early takedown, or detachable-barrel, bolt actions. The Westley Richards in .425 Magnum Express, top, features a dropbox magazine, which allows the shooter to quickly reload via stripper clips. The Rigby has a threaded barrel and receiver for assembly and disassembly.

This magazine rifle is chambered for the mighty .505 Gibbs, which was introduced in 1911 and built to be used in bolt actions, rather than more expensive double rifles. G. Gibbs built just over 75 original .505 guns, making the rifle pictured here one of the most sought-after English magazine rifles today. Note the thickness of the barrel in relation to the receiver.

The opposite side of the William Evans 1902 underlever shown above. The action this rifle is built on was used extensively by makers like Rigby, Lancaster, and Greener. While the game scenes on the rifle are not photo-realistic—as we see on fine guns today—it was engraved to a very high standard for the time.

The four-leaf rear express sight on a 1912 Westley Richards Best Quality .425 Magnum Express double rifle. Each sight leaf was hand filed for points of aim out to 500 yards. This rifle was incredibly innovative for its time. It featured hand-detachable locks and was chambered for a rebated-rim cartridge.